CAPE CANAVERAL — Just three weeks after the Delta 4-Heavy rocket left the launch pad on its way to a successful satellite-deployment mission for U.S. national security, a smaller booster in the family has rolled out for its August military flight.

The United Launch Alliance Delta 4-Medium+ (4,2) rocket, a single-stick vehicle with a four-meter-diameter upper stage and payload shroud, was erected today at Complex 37.

It will be equipped with two strap-on solid rocket boosters to augment the thrust from the RS-68A hydrogen-fueled main engine, producing a combined 1.1 million pounds of liftoff thrust.

The rocket, just like its Heavy brother on June 11, will fly directly into geosynchronous orbit 22,300 miles above the Earth, requiring a taxing three burns by the cryogenic upper stage.

The Heavy placed a covert signals intelligence spy satellite, commonly called Mentor 7, over a part of the world that includes the Middle East, North Korea and China for the U.S. National Reconnaissance Office to aid warfighters and policy makers combat terror groups and adversaries.

It was the 105th successful launch in a row for the Delta program since 1999.

“From that unique vantage point they will survey objects in the GEO belt and allow us both to track known objects and debris and to monitor potential threats that may be aimed at this critically important region,” said Douglas Loverro, deputy assistant Secretary of Defense for Space Policy

The payloads are known officially as GSSAP 3 and GSSAP 4, the Air Force told Spaceflight Now.

They will join a similar pair launched into the geosynchronous belt in July 2014 aboard Delta 368. Over the past two years, the craft have operated above and below the GEO belt and been spotted close together and separated far apart.

Developed in secret by the Air Force and built by Orbital ATK, the small craft constitute a “neighborhood watch” to monitor collision threats and potential nefarious activities with U.S. government assets in geosynchronous orbit.

“In short, threats can no longer hide in deep space. Our decision to declassify this program was simple. We need to monitor what happens 22,000 miles above the Earth, and we want to make sure that everyone knows we can do so,” Loverro said.

Geosynchronous orbit is heavily used by communications spacecraft, missile launch detection platforms and eavesdropping reconnaissance satellites since that altitude allows them to match the Earth’s rotation and appear locked above one part of the globe.

GSSAP is aimed at filling the surveillance gap in geosynchronous orbit.

The technical specifications of the GSSAP satellites — such as launch mass, dimensions and cost — are classified.

GSSAP 3 and 4 are “identical” to each other, the Air Force says, but the military declined to say if the duo carries any upgrades from GSSAP 1 and 2 or whether any further satellites were planned.

“Aside from GSSAP satellites 3 and 4, which are scheduled to be launched in August, there are no details available for constellation sizing,” the Air Force said.

In preparation for the upcoming launch, the two stages of the Delta 4 rocket were mated together at the Horizontal Integration Facility at Cape Canaveral Air Force Station and then transported to the nearby Complex 37 launch. Rollout occurred yesterday.

Hydraulic pistons were used to raise the 167-foot-long orange and white vehicle upright on the pad today to begin its vertical integration, checkout and test program. Workers will attach the solid rocket boosters to the vehicle at the pad, as well as hoist and mate the GSSAP payload to top off the 206-foot-tall rocket.

The launch will be the 375th for a Delta rocket, the 33rd Delta 4 and the 14th to fly in the Medium+ (4,2) configuration with a pair of strap-on solid motors.

For United Launch Alliance, it is scheduled to be the company’s 44th flight for the Air Force, the 110th launch overall since 2006 and the seventh this year. 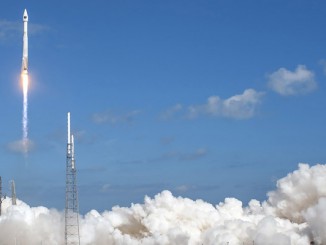 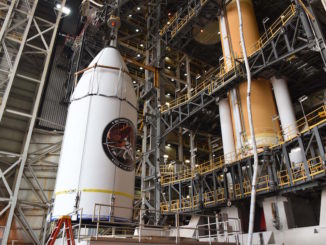 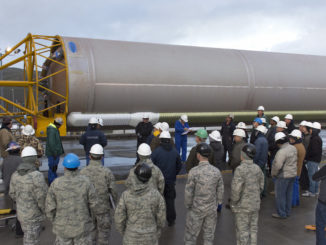