The Ariane 5 is one of the most powerful rockets in the world, typically carrying two large satellites at a time on missions toward geostationary orbit more than 22,000 miles (nearly 36,000 kilometers) over the equator. The Ariane 5 launches with a carbon fiber structure inside its payload fairing, giving the rocket upper and lower berths inside the nose shroud.

But the Ariane 5’s next mission will loft three spacecraft, each with a launch weight of several tons. Two of the satellites will fit together inside the larger upper section of the Ariane 5 payload fairing, while the third spacecraft will ride below in the lower berth.

The BSAT-4b television broadcast satellite arrived in French Guiana on July 1 aboard another Antonov An-124 cargo transport, after flying from an airport near Maxar’s satellite manufacturing facility in Palo Alto, California, with a stopover in Orlando, Florida.

The three satellites were trucked from the airport near Cayenne to the Guiana Space Center, located in Kourou, French Guiana, for unpacking, testing and fueling.

The 7,760-pound (3,520-kilogram) BSAT-4b satellite will then be mounted on top of the Ariane 5 rocket’s upper stage inside the launcher’s final assembly building at the European-run spaceport in South America. Galaxy 30 and MEV-2 will be connected together and encapsulated inside the Ariane 5’s payload shroud, then the upper composite will be lowered over BSAT-4b before the Ariane 5 rolls out to the launch pad on the day before liftoff.

It will be the first launch from French Guiana since February. Arianespace, which oversees Ariane 5, Soyuz and Vega launches from the Guiana Space Center, suspended launch operations at the spaceport in March due to the coronavirus pandemic.

Teams resumed regular work at the launch site in May, and Arianespace aimed to launch a light-class Vega rocket last month with a cluster of 53 small satellites. But persistent high-altitude winds kept the mission grounded, and Arianespace decided to recharge batteries on the rocket and on-board its satellite payloads.

The recharging activity on the satellites was expected to take several weeks to complete. Teams planned to remove the Vega rocket’s payload composite containing the satellites and transport it back to a clean room facility at the space center, where technicians could open the payload fairing and access the 53 spacecraft.

Arianespace said last week the Vega launch would be delayed to Aug. 17, and the Ariane 5 launch would proceed July 28.

The Ariane 5 will fly to the east from the Guiana Space Center, and officials do not expect it to be as susceptible to high-altitude wind limits as the Vega launch on a northerly trajectory. The launcher will release the Galaxy 30, MEV-2 and BSAT-4b satellites into an elliptical transfer orbit, and the spacecraft will use their own engines to circularize their orbits more than 22,000 miles over the equator.

The MEV-2 mission will perform a similar docking and mission extension service beginning in early 2021 for the Intelsat 10002 communications satellite, which launched in 2004.

Galaxy 30 will also provide broadband connectivity, and it hosts a Wide Area Augmentation System payload for the Federal Aviation Administration to support navigation services for civil aviation in the United States, including precise altitude and position data for airplanes departing and arriving at busy airports.

The BSAT-4b satellite will be positioned over the Asia-Pacific region, and it will broadcast direct-to-home 8K and 4K ultra-high-definition television services for the Japanese operator B-SAT. The new satellite will be a backup for BSAT-4a, which launched in 2017. 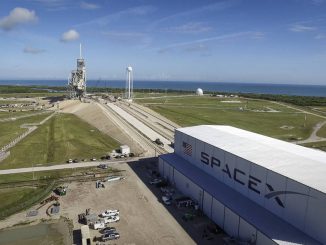 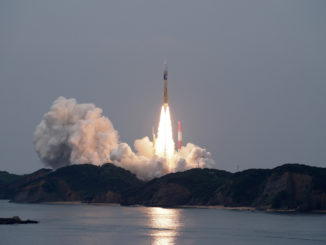 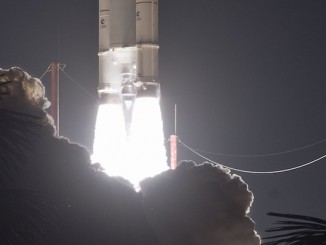