United Launch Alliance technicians positioned the first stage for the next Atlas 5 rocket on a mobile launch platform Friday at Cape Canaveral, a key step in preparations for an October mission that will debut a new solid-fueled booster design.

The launch will carry a classified payload into orbit for the National Reconnaissance Office, marking the 86th flight of an Atlas 5 rocket since 2002, and the fifth Atlas 5 launch this year. The mission is designated NROL-101 in the NRO’s numerical naming scheme.

The first stage will be loaded with 25,000 gallons of RP-1 kerosene fuel and 49,000 gallons of liquid oxygen on launch day to power the rocket’s Russian-made RD-180 main engine, which will generate 860,000 pounds of thrust at full throttle.

The raising of the first stage inside the VIF marked the Launch Vehicle On Stand milestone for ULA’s launch team.

In the coming days, three Northrop Grumman-made GEM 63 solid rocket motors will be mounted on the Atlas 5’s first stage. Then ULA will hoist the rocket’s Centaur upper stage on top of the Atlas 5, along with the lower portion of the launch vehicle’s payload fairing.

After preliminary checkouts of the rocket, technicians will add the rocket’s clandestine satellite payload to complete the build-up of the Atlas 5 for the NROL-101 mission.

The Atlas 5 is scheduled for liftoff in October, according to officials at the U.S. Space Force’s Space and Missile Systems Center, which oversees launches of national security satellites.

The GEM 63 solid rocket boosters will fly for the first time on the NROL-101 mission. They replace the Aerojet Rocketdyne AJ-60A strap-on boosters flown on previous Atlas 5 rockets.

Each 63-inch-diameter (1.6-meter) booster — officially called a Graphite Epoxy Motor — measures 66 feet (20 meters) long and can produce 373,800 pounds of thrust at maximum power. The GEM 63 boosters will ignite on the launch pad and burn for 94 seconds, consuming 97,500 pounds (44.2 metric tons) of pre-packed solid propellant before jettisoning to fall into the sea.

The boosters give an extra push to rockets carrying heavier payloads into orbit, or missions that need to place satellites into high-altitude orbits.

Like the AJ-60A motor, the GEM 63 will have fixed nozzles and a curved, or ogive, nose cone, providing the proper aerodynamic shape to ensure the booster cleanly falls away from the Atlas 5 after burnout. Northrop Grumman’s GEM 63 booster produces roughly the same thrust and has approximately the same dimensions as the AJ-60A, allowing ULA to introduce the new booster model as a “direct replacement” for the older Aerojet Rocketdyne version.

Julie Arnold, a ULA spokesperson, said the company will continue to fly the Aerojet Rocketdyne boosters on future Atlas 5 missions until the rocket is fully transitioned to the Northrop Grumman motors. The AJ-60As will continue launching on missions with Boeing’s Starliner commercial crew capsule, and ULA is working with NASA toward the future use of GEM 63s on astronaut launches. 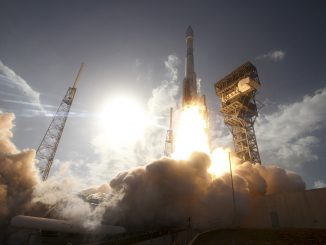 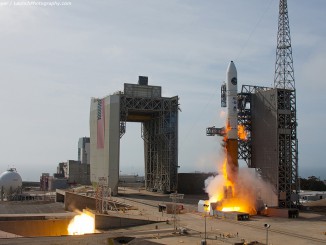 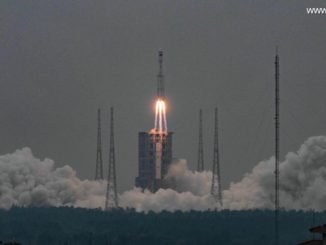