United Launch Alliance could load cryogenic methane and liquid oxygen propellants into a Vulcan rocket test article at Cape Canaveral for the first time in the coming weeks, timing key tests for the next-generation rocket in between flights of Atlas 5 rockets that will share the same launch complex for the next few years.

The first Vulcan rocket should be ready for launch by the end of this year, said John Elbon, ULA’s chief operating officer, in early May.

Col. Robert Bongiovi, director of the launch enterprise division at the U.S. Space Force’s Space and Missile Systems Center, said Wednesday that the first Vulcan launch could occur late this year or in early 2022. The Space Force will be the largest customer for ULA’s Vulcan rocket, which is set to launch on two certification flights before launching its first U.S. military mission — known as USSF-106 — in early 2023.

An Atlas 5 launch Tuesday with a U.S. military satellite tested an upgraded version of the RL10 upper stage engine that will fly on the Centaur upper stage of the Vulcan rocket, and the next Atlas 5 launch in June will be the first to use a Vulcan-like payload shroud made in the United States rather than in Switzerland.

Construction and checkouts of new launch pad systems for the Vulcan Centaur rocket are nearly complete, according to Ron Fortson, ULA’s director and general manager of launch operations.

“This is going to be a dual-use pad,” Fortson said recently as he guided reporters around pad 41 at Cape Canaveral Space Force station. “No one has done that before, where you basically launch an Atlas, and a whole different product line, Vulcan, on the same pad.”

The three 100,000-gallon methane storage tanks are located on the north side of pad 41. The company, a 50-50 joint venture between Boeing and Lockheed Martin, also upgraded the launch pad’s sound suppression water system, which dampens the intense acoustics generated by a rocket launch.

The liquid hydrogen and liquid oxygen propellant storage facilities at pad 41 also had upgrades to accommodate the larger Centaur upper stage that will fly on Vulcan rockets.

The new Centaur 5 upper stage for the Vulcan rocket measures 17.7 feet (5.4 meters) in diameter, more than twice the width of the Centaur 3 upper stage on the Atlas 5. The Centaur 5 will be powered by two RL10C-1-1 engines, rather than the single RL10 engine flown on most Atlas 5s, and will carry more than two-and-a-half times the propellant as the current Centaur.

Fortson said ULA has finished testing of the new methane storage tanks, and flowed the cryogenic fluid through ground supply lines leading to the launch mount at pad 41.

The Vulcan Launch Platform is a new mobile launch table that will carry the Vulcan Centaur rocket from ULA’s Vertical Integration Facility to pad 41. Ground crews raised the Vulcan pathfinder core stage on the platform earlier this year and rolled the rocket to the launch pad for the first round of ground tests.

ULA stored the VLP and the Vulcan pathfinder stage inside the company’s nearby Spaceflight Processing Operations Center at Cape Canaveral while the the company readied the most recent Atlas 5 rocket for takeoff with the military’s SBIRS GEO 5 early warning satellite.

With the Atlas 5 and SBIRS GEO 5 successfully launched Tuesday, the Vulcan team will again roll the rocket out to pad 41 to continue the pathfinder testing. ULA will start stacking the next Atlas 5 rocket inside the VIF for a launch scheduled June 23 with the Space Force’s STP-3 mission.

ULA plans to build on the earlier ground system flow tests by loading fuel into the Vulcan booster for the first time.

“When we bring the VLP out the next time, that’s when we’ll start to actually doing those tests to flow through the vehicle,” Fortson said.

The Vulcan pathfinder vehicle arrived at Cape Canaveral in February on ULA’s rocket transport ship from the company’s factory in Decatur, Alabama.

The Atlas 5 launch Tuesday was the first Atlas 5 mission in more than six months, but ULA’s launch cadence is expected to pick up this year. After the STP-3 launch June 23, the next Atlas 5 launch is scheduled July 30 with a test flight of Boeing’s Starliner crew capsule.

“We’ve got to work the Vulcan work in between the launches,” Fortson said. “We’ve got STP-3 coming up right after this. They have small windows to come do work and try and do tests, and then we put another vehicle out here.”

The tanking tests on the Vulcan pathfinder rocket, which has ground test units of Blue Origin’s BE-4 engines, will help engineers determine how they will load propellants into Vulcan on launch day.

“We’ll learn about all the properties and how it operates, and we’ll develop our CONOPS (concept of operations) based on that,” Fortson said.

ULA has lots of experience with super-cold liquid hydrogen, another cryogenic rocket fuel, on the company’s Delta 4 rocket family and on the Centaur upper stage.

‘They’re both ultra-cold,” Fortson said. “They’ve got different properties. We’re just trying to learn how it behaves as we transfer it through.

“All this testing we’re doing right now is really to fully understand the properties of this gas and how it’s going to perform when we put it into the vehicle,” Fortson said. “That’s really what we’re going to be doing for the next few months here.”

While the Vulcan’s ground systems are getting wrung out, ULA is using its operational rocket launches to test technology that will fly on the next-gen launch vehicle.

The launch Tuesday debuted a new variant of the Aerojet Rocketdyne RL10 engine on the Centaur upper stage. The hydrogen-fueled engine’s newest version, called the RL10C-1-1, comes with a performance improvement and is easier to build, according to ULA.

The RL10C-1-1 engine has a longer nozzle than the engines flown on previous Atlas 5 rockets, and introduces a new 3D-printed injector, which flew on its first operational mission, said Gary Wentz, vice president of government and commercial programs at ULA.

According to Aerojet Rocketdyne’s website, the RL10C-1-1 engine produces about 1,000 pounds of additional thrust over the RL10C-1 engine version used on previous Atlas 5 rockets.

More than 500 RL10 engines have flown on rockets since the 1960s. ULA’s Vulcan Centaur rocket will also use the RL10C-1-1 engine variant, as will all future Atlas 5s except missions with Boeing’s Starliner crew capsule, which uses a unique dual-engine Centaur upper stage.

The new booster replaces an Aerojet Rocketdyne strap-on booster that has flown on Atlas 5 launches since 2003. Aerojet Rocketdyne’s solid-fueled motors will continue launching Atlas 5 rockets carrying crew missions into orbit, but this week’s mission was the last military-procured Atlas 5 flight to use the old booster design. The Aerojet Rocketdyne boosters were certified for astronaut launches.

ULA has merged the avionics and guidance systems on its Atlas 5 and Delta 4 rockets into a common design, which will also fly on the Vulcan Centaur.

Next month, ULA plans to debut the final major Vulcan-like system that will first fly on the Atlas 5:  a payload fairing produced in a simpler, less expensive way than previous Atlas 5 nose shrouds.

The 17.7-foot-diameter (5.4-meter) payload fairing set to launch on the STP-3 mission next month looks the same as fairings that have flown on past Atlas 5 rockets.

But the fairing is the product of a new industrial partnership between ULA and the Swiss company RUAG Space, which previously built all of the 5.4-meter Atlas 5 fairings at a plant in Switzerland. The smaller Atlas 5 nose cone used on some missions comes from a ULA facility in Harlingen, Texas.

ULA and RUAG developed a new payload fairing production line at the existing Atlas, Delta, and Vulcan factory in Alabama.

The production line in Alabama uses a new process that simplifies the steps required to construct the fairing. The “out of autoclave” manufacturing method can cure the carbon fiber composite fairing using only an oven, eliminating a high-pressure autoclave that limits the size of pieces that can fit inside, according to ULA.

The change allows payload fairings to be produced in two halves instead of 18 or more smaller pieces. That results in fewer fasteners, doublers, and less opportunities for defects, ULA said in a blog post last year.

It’s also faster and cheaper to manufacture the payload fairing using the new method, according to ULA.

ULA plans 30 or more additional Atlas 5 missions before retiring the rocket in favor of the Vulcan Centaur.

In April, Amazon purchased nine Atlas 5 flights to begin launching satellites for the company’s Kuiper internet network. A spokesperson for the the Space Force’s Space and Missile Systems Center said last week that six national security missions remain to fly on Atlas 5 rockets in the next couple of years, not counting the SBIRS GEO 5 mission launched Tuesday.

Space News reported Thursday that the Space Force and ULA have agreed to move the first military mission assigned to a Vulcan Centaur rocket to an Atlas 5 rocket. That mission, designated USSF-51, is scheduled to launch in 2022. 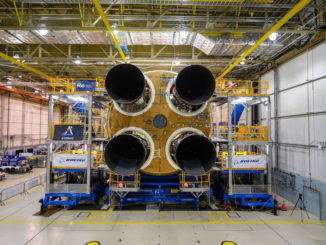 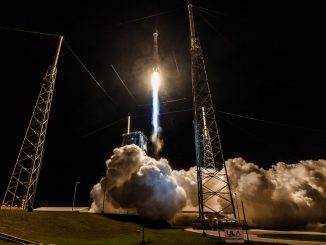 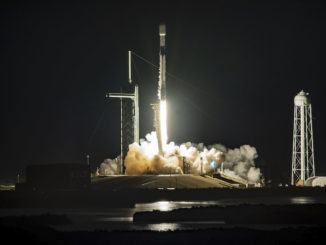