Two astronauts floated outside the International Space Station Sunday for the first in a series of spacewalks to upgrade the lab’s aging solar power system, assembling a support fixture that eventually will hold a new solar blanket.

The spacewalkers lost time struggling to get a bolt properly tightened and were unable to get as far along as they’d planned with a second fixture. That work will resume next Friday in an already planned spacewalk primarily devoted to station maintenance.

Floating in the Quest airlock, Kate Rubins and Victor Glover switched their spacesuits to battery power at 6:12 a.m. EST to officially kick off the 235th station spacewalk since assembly began in 1998, the third so far this year and the third overall for both astronauts.

Both astronauts were equipped with helmet cameras, but Rubins made the first use of a high-definition “helmetcam” that provided razor-sharp views, allowing flight controllers to follow along as never before.

The space station is equipped with four huge solar array wings, two on each side of the lab’s power truss. Each wing is made up of two 39-foot-wide blankets extending 112 feet in opposite directions. The first two-blanket wing was launched in December 2000 with additional pairs delivered in 2006, 2007 and 2009.

They are installing the first support fixture to support new solar arrays arriving later this year to upgrade the station’s electrical system.

Solar cells degrade over time and NASA is adding six new blankets, at a cost of $103 million, to the existing power system. Each one of the new ISS roll-out solar arrays, or IROSA, blankets measure 20 feet wide by 63 feet long when fully extended, generating more than 20 kilowatts.

Combined with the 95 kilowatt output of the original eight panels, the station’s upgraded system will provide about 215,000 kilowatts of power.

“Commercial users are coming on board that are looking for power that that we didn’t even dream of back in the mid 90s,” said Kenny Todd, deputy manager of the station program at the Johnson Space Center.

“The technology really has gotten to the point that we can do something like these roll out solar arrays. They’re not as big as the ones that we previous deployed, and yet we can we can get even more power out of them.”

Rubins and Glover spent the day Sunday working at the base of the far left, or port six, set of solar arrays, which provide power to electrical channels 2B and 4B.

Exiting the airlock, the astronauts carried out two eight-foot-long bags containing the struts needed for assembly of triangular support fixtures at the bases of the two P6 arrays.

The first fixture, on the P6/2B solar array mast canister, went together relatively smoothly but the astronauts had problems completely tightening a bolt holding a strut to the structure. While the fixture was securely attached to the mast canister, a bit of play remained.

Rubins backed out one bolt and attempted to re-install it, but it again stalled before firmly locking the components flush together. Rubins and Japanese astronaut Soichi Noguchi plan another spacewalk next Friday and they may make another attempt to tighten the stuck bolt.

In the meantime. Glover pressed ahead with assembly of a triangular section of the support fixture needed for the P6/4A set of arrays. It was tied down on the station’s power truss to await assembly during the next spacewalk.

Rubins and Glover then returned to the Quest airlock, ending a seven-hour four-minute spacewalk at 1:16 p.m. Total station spacewalk time now stands at 1,478 hours and four minutes, or 61.6 days. Rubins’ total through three spacewalks stands at 19 hours and 50 minutes while Glover has logged 19 hours and 20 minutes through his three excursions. 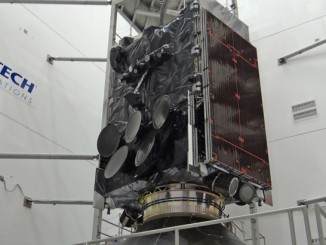 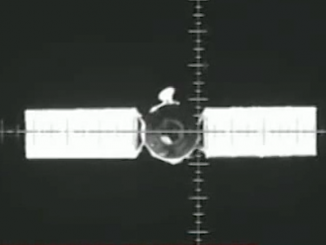