NASA civil servants and the agency’s contractor work force are bracing for high winds and rain from Hurricane Dorian, securing rocket stages, spacecraft assembly areas and even hauling a 6.7-million-pound mobile launch tower, designed for the huge rocket being built for the Artemis moon program, back to the cavernous Vehicle Assembly Building for safekeeping.

The 355-foot-tall gantry structure, carried atop a squat Apollo-era crawler-transporter, is scheduled to begin the 4.2-mile trip from launch complex 39B back to the protection of the VAB at dawn Friday, a journey expected to take more than eight hours to complete.

The VAB was designed to withstand winds of 125 miles per hour without major damage. The highest wind ever recorded at NASA’s seaside launch pads during an earlier hurricane was around 115 mph.

“Right not, we’re looking at a Cat-4 hurricane, which is nothing to sneeze at,” Bob Cabana, director of the Kennedy Space Center and a former shuttle commander, told CBS News. “It’s predicted to come in a little south of us, which actually puts us on the wet side of the storm, the storm surge, which is a concern.”

In the wake of Hurricane Sandy in 2012, beach dunes protecting launch pads 39A and 39B suffered major damage and erosion. A beach restoration project was carried out and more sand was pumped ashore after two more recent hurricanes, Irma and Matthew.

“Unfortunately, all the growth that’s required to stabilize the dunes hasn’t had a chance to really take hold,” Cabana said. “So we’ll see how that performs in light of the storm surge that’s coming. I’m hoping there’s enough growing out there that it stays in place. Again, that’s to protect the pads.”

As for the mobile launcher perched atop pad 39B, “obviously, it’s a huge investment,” Cabana said of the towering structure. With Dorian approaching Florida’s Space Coast, NASA managers met Wednesday and decided to protectively move the crawler-transporter to the pad. The mobile launcher was designed to withstand a category 1 hurricane but given Dorian’s steady strengthening, the decision was made Thursday to haul it back to the VAB.

The space center will go to hurricane condition 3, or Hurcon 3, status on Friday. Normally, that is done when 50-knot winds are expected within 48 hours, but Cabana said he was putting it into place earlier than usual “because it’s a holiday weekend, we wanted to get ready early and make sure folks have a chance to get off Saturday and Sunday and take care of preparations for themselves.”

Based on the storm’s track and when high winds are expected, NASA plans to close the Kennedy Space Center Sunday. A “rideout” team of 100 to 120 space center workers will remain behind in the Emergency Operations Center located next to the VAB, inside the Launch Control Center. The building is designed to withstand a category 5 hurricane.

“Once the storm passes, we’ll bring the damage assessment and recovery team in to make sure the center is safe for bringing folks back on board,” Cabana said. “Depending on how things go, we could bring them in as early as Tuesday. It just depends on when the storm passes and what the winds are and when it’s safe.”

Space Launch System rockets, being built by Boeing in a sprawling plant just outside New Orleans, will launch Orion crew capsules to the moon. An unpiloted test flight is planned for 2021, followed by a crewed around-the-moon test flight in the 2022-23 timeframe and a moon landing mission in 2024.

The Lockheed Martin-built Orion capsule that will be launched atop the first SLS booster in 2021 is being assembled in a hangar-like processing building at the heart of the Kennedy Space Center where Apollo moon ships were once tested for flight. Sandbags are being positioned around door frames and loose material outside the building is being hauled indoors.

A spokeswoman for United Launch Alliance, a partnership between Boeing and Lockheed Martin that builds Delta 4 and Atlas 5 rockets, said the company is making sure its vehicles are protected in processing facilities at the Cape Canaveral Air Force Station. Atlas stages needed to launch Boeing’s first two CST-100 Starliner commercial crew ships are at the Cape, as are components for a Delta 4 “Heavy” scheduled for launch next year.

“All ULA facilities are designed to withstand hurricane-force winds,” the spokeswoman told Spaceflight Now. “Those design loads vary relative to the facility and the timeframe in which it was designed. The majority of our launch facilities have been designed for wind speeds of 130 mph and higher. … Our design processes include additional factors on top of those wind loads, such that we would expect our systems to be likely capable of withstanding higher winds without suffering major damage.”

SpaceX currently launches Falcon 9 rockets from pad 40 at the Cape Canaveral Air Force Station and Falcon 9s and Falcon Heavy boosters from pad 39A at the nearby Kennedy Space Center. A spokesman said the company was working with Air Force and NASA personnel “to take all necessary precautions to protect our employees and safeguard facilities in the potentially affected areas.”

Cabana said he was hopeful Dorian would not cause “a major impact to the community and our folks.”

“That’s the biggest concern,” he said. “Hardware, that’s replaceable. But my concern is the team here at KSC, I want to make sure everybody gets home, takes care of their families and we get everybody back here safely to keep pressing on to get Artemis to the moon by 2024.” 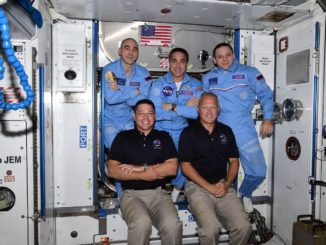 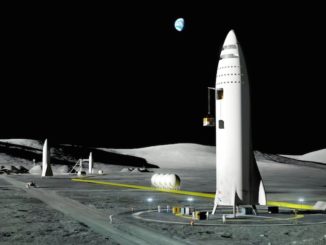 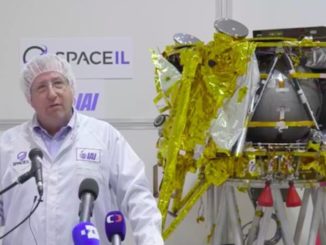