Maintaining a brisk flight rate three days after its last launch, SpaceX sent a Falcon 9 booster powered by a reused first stage into orbit Wednesday evening from Florida with an Airbus-built communications satellite for SES and EchoStar.

The successful launch placed the 5.7-ton (5.2-metric ton) satellite in a “supersynchronous” orbit arcing thousands of miles above Earth, and the Falcon 9’s first stage returned to landing on a football field-sized barge holding position around 200 miles (300 kilometers) east of Cape Canaveral.

Wednesday’s mission was the 15th Falcon 9 flight of the year, and the second in three days, coming on the heels of a launch Monday from California’s Central Coast.

Owned by SES, the payload carried into orbit Wednesday from the Kennedy Space Center will broadcast television programming, relay video for cable outlets, and support data services over the Americas during a mission expected to last at least 15 years.

Luxembourg-based SES and Colorado-headquartered EchoStar Corp. will share the satellite’s communications capacity in a “condosat” arrangement announced in 2014. SES calls its portion of the spacecraft SES 11, and EchoStar named the mission EchoStar 105.

The 229-foot-tall (70-meter) Falcon 9 rocket lifted off from pad 39A at the Florida spaceport at 6:53 p.m. EDT (2253 GMT) Wednesday after a textbook countdown, climbed into a clear evening sky just before sunset and turned on an easterly heading as it soared into the stratosphere.

The first stage’s nine main engines shut down around two-and-a-half minutes after liftoff. Moments later, the 14-story booster dropped away from the Falcon 9’s second stage, then flipped around to fly tail first, setting up for a scorching re-entry from an altitude of 74 miles (119 kilometers).

Grid fins unfurled from the cigar-shaped booster to help guide it back to Earth, and three of the first stage engines reignited for an entry burn, followed by a final braking maneuver with one of the Merlin engines as it approached SpaceX’s drone ship, dubbed “Of Course I Still Love You.”

Four landing legs made of carbon fiber and aluminum honeycomb extended just before the rocket touched down on the floating barge in rough seas, notching the 18th intact recovery of a Falcon 9 first stage booster in 23 tries.

The landing at sea completed a seemingly flawless re-flight for the first stage booster, which logged its first mission in February sending a Dragon supply ship on a trajectory toward the International Space Station, then returned to Cape Canaveral for recovery.

Going into Wednesday’s flight, SES had experience launching a satellite on a previously-flown Falcon 9 booster. The global satellite operator put one of its payloads on the first Falcon 9 launch with a reused first stage March 30, making history and going far in demonstrating SpaceX’s concept for reusing rocket hardware, a capability the company says will slash the cost of spaceflight.

Another reused booster launched June 23 with the BulgariaSat 1 communications satellite, and the SES 11/EchoStar 105 spacecraft launched Wednesday was the third payload to fly on a previously-launched Falcon 9.

The spacecraft deployed from the launcher around 36 minutes into the mission as it flew off the east coast of Africa. Ground controllers received the first signals from the SES 11/EchoStar 105 satellite a few minutes later, and engineers confirmed it was operating normally.

Over the next couple of weeks, the spacecraft’s own liquid-fueled engine will conduct three apogee burns and one perigee burn at the high and low points of its orbit, eventually settling in a circular geostationary orbit 22,300 miles (35,800 kilometers) directly over the equator.

The satellite’s speed at that altitude will match the rate of Earth’s rotation, and it will hover over an operating post at 105 degrees west longitude, entering commercial service by late November.

“From our point-of-view, it’s basically for the U.S. video neighborhood, and specifically for the delivery of HD and Ultra HD,” said Martin Halliwell, chief technology officer, in an interview before the launch.

“We’re trying to utilize this for the development of Ultra HD, trying to encourage the usage and distribution of that. We’re covering the whole of (the continental United States), plus Hawaii, Mexico and the Caribbean as well, so it has very good coverage.”

SES will primarily use the satellite to relay video programming for cable channels.

EchoStar says it will employ the relay station’s Ku-band instruments for video distribution and data services for media companies, corporate customers, and the U.S. government and military over the United States, the Gulf of Mexico and the Caribbean.

The newest member of the SES and EchoStar fleets will replace the AMC 15 and AMC 18 satellites launched in 2004 and 2006.

Halliwell has been one of SpaceX’s most loyal proponents in the commercial satellite business.

He said SES did not receive a significant financial discount from SpaceX in switching the SES 11/EchoStar 105 launch to a reused booster, but the agreement did result in an earlier launch date.

The roughly 11,500-pound (5,200-kilogram) satellite, built by Airbus Defense and Space, was originally supposed to launch about one year ago, according to Halliwell. But a Falcon 9 rocket explosion on a launch pad at Cape Canaveral in September 2016 grounded SpaceX missions more than four months, and re-shuffled the company’s manifest.

So SES jumped at the the availability of a recovered rocket in SpaceX’s inventory to ensure its next satellite could launch as soon as possible.

SpaceX chief executive Elon Musk said earlier this year the company wants to recoup a $1 billion investment in making the Falcon 9 rocket’s first stage recoverable and reusable, so prices will not drop significantly in the short-term. In future years, Musk said Falcon 9s could be landed and re-launched within 24 hours, cutting costs to little more than the price of propellant.

Karim Michel Sabbagh, CEO of SES, is pushing for a 50 percent reduction in Falcon 9 prices, and he is not alone. A Falcon 9 launch currently sells for around $61 million commercially, according to SpaceX’s website.

“Obviously, we’d love to see that,” Halliwell said, sharing his personal prediction on future launch price movement. “I would love to, but I think we’re going to have about the sort of numbers that we’ve got … Will demand increase? Will demand drive the pricing associated with it? I don’t know. What does the cost need to be to be self-sustaining? I don’t know the answer to any of this. Will it come down to $30 million? I don’t think so.”

While many space industry officials and observers have called attention to the impact of reused rockets on launch prices, Halliwell said there is another, less discussed benefit: launch availability.

“I think, in the long term, they’ve got so much hardware which is coming back, it has to help,” he said. “It has to make the cadence improve, and the fact they’ve got two (launch sites), and maybe in the future four — between pad 40, 39A, Vandenberg and Texas — wow, that should be good. For us, it gives us a better chance to get into space on time.”

According to Halliwell, most satellites spend months in storage between the end of construction and shipment to their launch base. Such delays come with financial pitfalls for satellite owners, who have already paid for the spacecraft and launch services, but are not earning revenue with their new asset.

SES is considering launching its next satellite — SES 16 developed in partnership with the government of Luxembourg — with a reused Falcon 9 booster in January.

SpaceX plans approximately five more missions before the end of the year — four from Florida and one from California — potentially including the inaugural test flight of the company’s huge Falcon Heavy rocket.

Next on the company’s manifest is the launch of the Koreasat 5A commercial communications satellite for direct-to-home television broadcasting in the Asia-Pacific region, and maritime relay services across Asia, the Middle East and the Indian Ocean.

The Koreasat 5A mission is set for liftoff no earlier than Oct. 30 from pad 39A at the Kennedy Space Center. 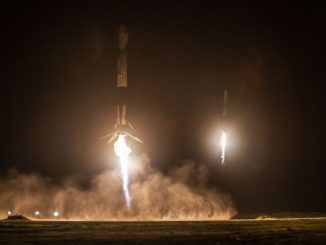 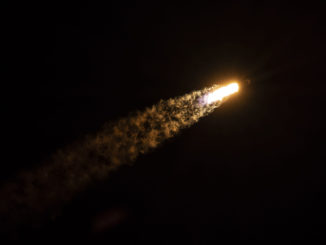