This is the launch timeline to be followed by the Atlas 5 rocket’s ascent into orbit from Cape Canaveral with the SBIRS GEO 5 satellite for U.S. military infrared reconnaissance. Launch is scheduled for Tuesday at 1:31 p.m. EDT (1731 GMT).

The Atlas 5 has a 40-minute window for takeoff Tuesday, and the 194-foot-tall rocket will arc to the east from Florida’s Space Coast on its first flight of the year. It will be the 87th Atlas 5 launch overall since United Launch Alliance’s workhorse rocket debuted in August 2002.

The timeline below ends with the conclusion of the primary mission, the deployment of the SBIRS GEO 5 satellite into geostationary transfer orbit. The Centaur’s RL10 engine will ignite a third time at T+plus 1 hour, 19 minutes, 27 seconds, for a planned 13-second de-orbit burn.

Follow live coverage of the countdown and launch in our Mission Status Center. With the RD-180 main engine running and two solid rocket boosters firing, the Atlas 5 vehicle lifts off with 1.6 million pounds of thrust and begins a vertical rise away from Complex 41 at Cape Canaveral Space Force Station, Florida. The Atlas 5 rocket exceeds the speed of sound and passes through the region of maximum dynamic pressure during ascent through the lower atmosphere. Having burned out of propellant approximately 40 seconds earlier, the spent solid rocket booster is jettisoned once dynamic pressure conditions are satisfied. The Centaur RL10C-1-1 engine ignites for the first of two upper stage firings. This burn will inject the Centaur stage and SBIRS spacecraft into an initial parking orbit. The payload fairing that protected the SBIRS GEO 5 spacecraft during launch is separated after passage through the atmosphere. The Centaur engine shuts down after arriving in a planned low-Earth parking orbit. The vehicle enters a 16-minute coast period before arriving at the required location in space for the second burn. Two suitcase-size rideshare payloads sponsored by the U.S. Air Force Academy will deploy from the aft bulkhead of the Centaur stage at T+plus 15 minutes, 37 seconds and T+plus 16 minutes, 25 seconds. A final push by Centaur is ignited to raise the orbit’s low point and reduce orbital inclination for the SBIRS GEO 5 spacecraft. The SBIRS GEO 5 missile warning sentinel is released into orbit from the Centaur upper stage to complete the launch. 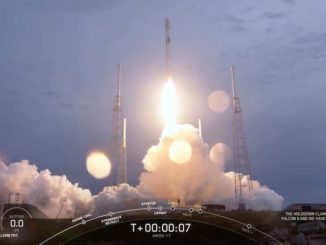 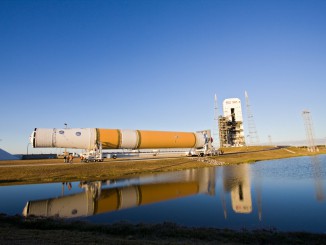 Delta 4 on pad for next GPS launch 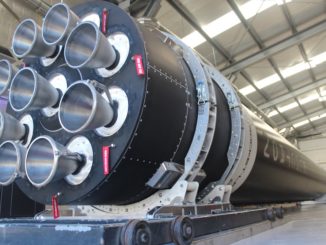 Rocket Lab plans next launch Saturday, closes in on first mission from Virginia