China’s heaviest rocket has rolled to its launch pad for liftoff Thursday with the country’s first Mars landing mission, an ambitious attempt to place an orbiter around the Red Planet and a robotic rover on the Martian surface in early 2021.

The Chinese mission, named Tianwen 1, is the second of three probes taking aim on the Red Planet this month, when Mars is properly positioned in its orbit around the sun to allow a direct journey from Earth. Such launch opportunities only come about once every 26 months.

A Mars orbiter named Hope developed by the United Arab Emirates in partnership with U.S. scientists successfully launched Sunday aboard a Japanese H-2A rocket. NASA’s Perseverance rover is scheduled for liftoff from Cape Canaveral on an Atlas 5 rocket July 30.

The UAE, Chinese and U.S. missions are all due to arrive at Mars in February 2021.

A Long March 5 rocket is set for liftoff with China’s Tianwen 1 mission some time between 12 a.m. and 3 a.m. EDT (0400-0700 GMT) Thursday, according to public notices warning ships to steer clear of downrange drop zones along the launcher’s flight path.

The launch will be the first operational flight of China’s Long March 5 rocket, the most powerful launch vehicle in the country’s inventory. Ground crews at the Wenchang Space Launch Center on Hainan Island — China’s newest launch site — transferred the Long March 5 rocket to its launching stand Friday for final pre-flight checkouts.

China has launched four Long March 5 rockets since the heavy-lift launcher debuted in 2016. Three of the four missions have been successful, including the last two test flights.

The Long March 5 will aim to send the Tianwen 1 spacecraft away from Earth on a seven-month trip to Mars. The ambitious mission is China’s first probe to another planet, following a series of progressively complex robotic expeditions to the moon.

Most recently, China has landed two rovers on the moon, including the first to explore the surface of the lunar far side. The next Chinese lunar mission, named Chang’e 5, is scheduled for launch late this year on a mission to return samples from the moon.

China kicked off development of the Mars mission in 2016.

“Benefiting from the engineering heritage of China’s lunar exploration program, the Chinese national strategy set Mars as the next target for planetary exploration,” wrote Wan Weixing, chief scientist of China’s Mars exploration program, in a paper published this month by the science journal Nature Astronomy. “China’s first Mars mission is named Tianwen 1, and aims to complete orbiting, landing and roving in one mission.”

Wan died in May after a long illness.

Chinese officials announced the Tianwen name for the country’s planetary missions in April. The name Tianwen comes from the work of ancient Chinese poet Qu Yuan, meaning “quest for heavenly truth,” according to the China National Space Administration, or CNSA, the country’s space agency.

The entire Tianwen 1 spacecraft weighs about 11,000 pounds, or 5 metric tons, fully fueled for launch, according to the mission summary in Nature Astronomy.

Assuming a successful launch this month, the spacecraft will enter orbit around Mars in February 2021, eventually settling in a loop around the Red Planet ranging between 165 miles (265 kilometers) and nearly 7,500 miles (12,000 kilometers) over the Martian poles.

As soon as next April, the lander and rover modules will detach from the orbiter to begin a descent through the Martian atmosphere. The prime candidate for the Tianwen 1 mission’s landing site is in Utopia Planitia, a broad plain in the northern hemisphere of Mars where radar soundings from orbit have indicated the presence of a reservoir of ice containing as much water as Lake Superior, the largest of the Great Lakes.

The Tianwen 1 rover weighs about 529 pounds, or 240 kilograms, nearly twice the mass of China’s Yutu rovers on the moon.

The orbiter is designed to operate for at least one Martian year, or about two years on Earth. The solar-powered rover, fitted with six wheels for mobility, has a life expectancy of at least 90 days, Chinese officials said.

“Tianwen 1 is going to orbit, land and release a rover all on the very first try, and coordinate observations with an orbiter,” Wan, the late chief scientist for China’s Mars program, wrote in Nature Astronomy. “No planetary missions have ever been implemented in this way. If successful, it would signify a major technical breakthrough.

“Scientifically, Tianwen 1 is the most comprehensive mission to investigate the Martian morphology, geology, mineralogy, space environment, and soil and water-ice distribution.”

When it takes off, ten liquid-fueled engines will power the Long March 5 rocket and Tianwen 1 off the launch pad with nearly 2.4 million pounds of thrust.

The Long March 5’s flight path will take the rocket east from Hainan Island over the South China Sea, where it will drop its four-strap on boosters — each powered by two kerosene-fueled YF-100 engines — around three minutes after liftoff. Unlike launches from China’s inland spaceports, missions originating from Wenchang follow trajectories over the sea, allowing rockets to jettison stages over water rather than over land.

Two YF-77 engines on the Long March 5’s core stage will burn super-cold liquid hydrogen and liquid oxygen propellants for nearly eight minutes. During the first stage burn, the Long March 5 will jettison its clamshell-like payload fairing once the launcher climbs above the thick, lower layers of the atmosphere. 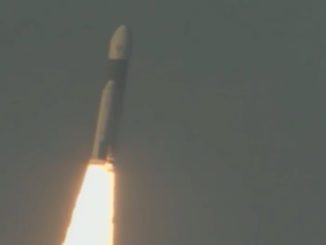 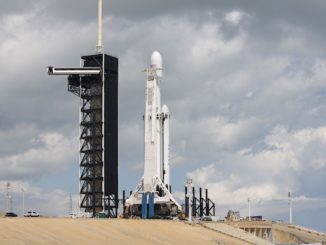 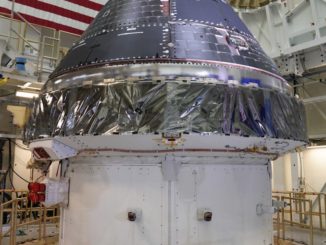