Rocket Lab’s fifth flight of the year is set for liftoff as soon as Wednesday (U.S. time) carrying a small experimental satellite to orbit for Astro Digital, a Silicon Valley company aiming to demonstrate technologies in space after an earlier focus on Earth observation.

The three-hour launch window opens at 0000 GMT Thursday (8 p.m. EDT Wednesday), or 1 p.m. Thursday in New Zealand, according to Rocket Lab. It will be Rocket Lab’s fifth launch of the year as the company seeks to ramp up to a monthly launch cadence, with a goal of launching every two weeks in 2020.

The payload for this week’s mission is a 16-unit CubeSat named Palisade owned and operated by Astro Digital, a company based in Santa Clara, California.

The Palisade spacecraft — about the size of a small suitcase — will ride Rocket Lab’s 55-foot-tall (17-meter) Electron booster into orbit.

The two-stage Electron launcher will deploy a Curie kick stage around nine minutes after liftoff. After flying over Antarctica, the Curie kick stage will fire its main engine to inject the Palisade spacecraft into its targeted orbit, followed by satellite separation around 71 minutes into the mission.

Airspace warning notices related to the launch suggest it will carry Palisade into a polar orbit, but the exact orbital parameters have not been released by Rocket Lab or Astro Digital. In a press kit for the launch, Rocket Lab said the Curie kick stage will “deploy the payload to more than twice the altitude reached by any Rocket Lab mission to date.”

The highest orbit achieved by Rocket Lab in its eight previous missions was around 335 miles (540 kilometers).

Beck said Rocket Lab has not made any pricing adjustments in the aftermath of SpaceX’s announcement in August of monthly rideshare launch opportunities for small satellites.

On the sun-synchronous orbit missions, SpaceX will charge customers $1 million to launch a 440-pound (200-kilogram) payload. The Falcon 9 can deliver nearly 80 times more mass to sun-synchronous orbit than Rocket Lab’s Electron, according to data on NASA’s launch vehicle performance website.

Rocket Lab’s price for a dedicated Electron launch — carrying up to 330 pounds (150 kilograms) into sun-synchronous orbit — is around $5.7 million.

“We’re not really feeling any pricing or other pressure,” Beck said.

Rocket Lab can still differentiate itself in the crowded launch market, especially for satellite operators seeking to launch into a specific type of orbit, according to Beck.

“The customer that flies on Rocket Lab really cares about things like LTAN (longitude of the ascending node), time of launch, the inclination, and control over the schedule because they’re trying to build constellations and trying to build businesses,” Beck said in an interview with Spaceflight Now. “Rideshare is really good for just getting some stuff up and doing a demo.

“Even if you’re ridesharing frequently, it’s great, but it still doesn’t enable you to build a commercial platform unless you’re going to the same place as everybody else.”

The SSO-A mission was successful, but not without difficulty. Spaceflight officials have said it was a challenge to fill capacity on the mission, and the launch broker said it would focus on arranging rideshare launches on smaller rockets in the future.

“It’ll be be interesting to see how SpaceX gets on as well,” Beck said. “Falcon 9 is a big vehicle to fill up with little spacecraft … So unless SpaceX launches an empty rocket, it will be quite challenging to get a full flight at a reasonable timeframe. We’ll see how it all pans out.

“It’s a different kind of customer that comes to us,” he said. “For many years, you have heard me say that we’re not going to build a bigger rocket, and it’s for this very reason. If you’re in the rideshare game, it’s impossible to compete with a platform like the Falcon 9.

“We very deliberately developed Electron as a 100 to 200-kilogram (payload) class vehicle, where you can put one microsat on there, or a couple of microsats on there, or a few 12Us (CubeSats) and deliver a constellation to exactly where it needs to be.”

Beck compared the service offered by Rocket Lab and SpaceX’s rideshare program to the difference in taking an Uber or taking a bus.

The Electron rocket set for launch this week, known as “Flight 9,” was originally assigned to ferry a different payload into orbit, Beck said.

“We had an original customer for Flight 9 that needed some more time to work on their spacecraft, so we moved the manifest around and moved the next customer into that position,” Beck said.

Rocket Lab did not identify the satellite that was replaced by Astro Digital’s Palisade spacecraft.

The Palisade spacecraft is launching on a technology demonstration mission. It carries an on-board propulsion system, an Astro Digital-developed communications system, and software developed by Advanced Solutions Inc., a Colorado company.

“Our team built this satellite in five months, including the complex RF (communications) payload, something we are very proud of,” said Chris Biddy, co-founder and CEO of Astro Digital.

“We were able to prove our core satellite platform technology with our first Landmapper satellites and have now expanded and evolved into supporting a diverse range of missions leveraging our experience,” Biddy said. “We started as an Earth observation company. Now we are an end-to-end mission provider supporting broad LEO-based missions.”

Rocket Lab has named this week’s mission “As The Crow Flies” as a nod to Astro Digital’s Corvus satellite platform, upon which the Palisade mission is built. Corvus is a genus of birds that includes crows.

Rocket Lab aims to close out 2019 with more launches carrying commercial satellites into orbit from the company’s New Zealand launch pad, while construction crews finish a new Electron launch facility in Virginia for a first launch there early next year, Beck said.

“There’s no way any of these missions could be rideshare,” he said. “The orbits are too unique. The requirements for the spacecraft are too unique. It’s really what we’ve developed the Electron vehicle to do.” 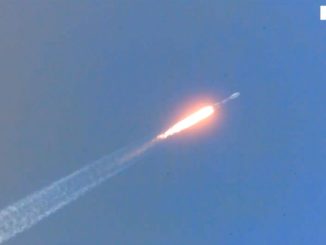 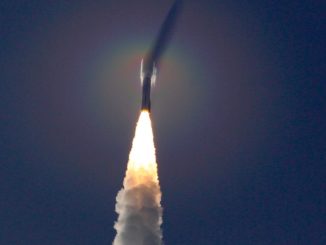 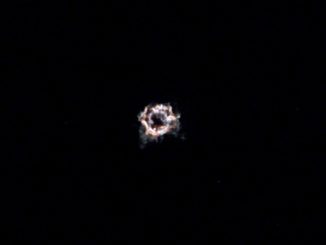