Scientists outlining four concepts for a powerful new space telescope that could launch in the 2030s this week said improvements in optics, detectors and access to huge new rockets like NASA’s Space Launch System could revolutionize the way astronomers observe potentially habitable planets, black holes, and the earliest galaxies in the universe.

It is likely NASA will only be able to afford one of the four proposed flagship observatories, and the space agency will take the advice of an independent review by the National Research Council in 2020 on which type of telescope should receive highest priority.

Four teams will produce interim reports on the four mission concepts by the end of this year, then publish their final reports in 2019 as a resource for scientists on the next astrophysics decadal survey panel in 2020, which will rank priorities for future NASA astronomy missions.

The studies will offer only a roadmap for NASA’s next leap in astronomy, and officials say any telescope that does reach the launch pad in the 2030s will likely look much different from the concepts currently under investigation. Tough decisions on engineering constraints and cost caps remain ahead, but NASA it needs to start preparing now given the long life cycles of such missions.

The two last decadal surveys prioritized infrared astronomy. A report from the National Research Council in 2001 led to the approval of the James Webb Space Telescope, which is due for launch next year, and the 2010 decadal survey recommended NASA pursue a mission which became the Wide-Field Infrared Survey Telescope, or WFIRST, scheduled for liftoff in the mid-2020s.

NASA expects to have funding for another advanced flagship-class, multibillion-dollar “great observatory” to launch some time in the 2030s, once the agency puts behind major spending on JWST and WFIRST.

Astronomers expect breakthroughs with any route prioritized in the next decadal survey. Cost estimates on each of the four mission concepts will come later to help inform the decadal survey’s decisions.

The LUVOIR mission concept would be a true successor to Hubble, covering much the same range of wavelengths as NASA’s most famous long-lived orbiting telescope. The mission outline is similar in capability to the High Definition Space Telescope, a “super-Hubble” proposed by astronomers in 2015, and the Advanced Technology Large-Aperture Space Telescope, known by the apt acronym ATLAST.

“With LUVOIR, we would be able to study in much greater detail how galaxies assemble their stars,” said Debra Fischer, a professor of astronomy at Yale University who co-chairs the LUVOIR study team. “The ‘killer app’ for LUVOIR is actually being able to coronagraph and image pale blue dots around some of the nearest stars, and then once we have those images, to be able to take spectra of them.”

Instruments on a mission like LUVOIR could look for signs of water vapor, oxygen, methane and other gases in alien atmospheres that might be habitable, Fischer said in a presentation Thursday to NASA’s Astrophysics Advisory Committee.

The size of an observatory like LUVOIR hinges on the volume of launchers that might be available in the 2030s. A primary mirror with multiple segments, similar to the design of JWST, would be folded up for liftoff.

The dimensions of a telescope like LUVOIR are bracketed by the capabilities of the Delta, Falcon and SLS rocket options, although the Delta 4 rocket is likely to be retired in favor of ULA’s next-generation Vulcan booster by the time such a mission is ready for liftoff.

Another rocket that might give future telescopes rides into space is the New Glenn, a methane-powered booster in development by Blue Origin, the space company founded by Amazon.com’s Jeff Bezos. The privately-operated New Glenn could make its debut launch by 2020, and it can loft payloads as wide as 7 meters (23 feet).

A rule-of-thumb for deployable telescopes is that a 9 or 10-meter (30-33 foot) primary mirror could tuck inside standard Delta 4-Heavy or Falcon Heavy fairings. The Space Launch System’s nose cone could fit a 16-meter (52-foot) multi-segment mirror folded up origami-style.

None of the proposals under study would need in-space assembly by astronauts, but Fischer said robotic or human servicing might be possible for a mission like LUVOIR.

Fischer identified launch vehicle limitations as one of the top technological risks for the LUVOIR concept, which would likely be sent to an observation post at the L2 Lagrange point a million miles (1.5 million kilometers) from Earth in the direction away from the sun. Other question marks include the readiness of ultraviolet mirror coatings, infrared detector technology, and “ultra-stable opto-mechanical” systems, Fischer said.

While LUVOIR would be a general purpose observatory best geared for large-scale galactic, dark matter and statistical exoplanet surveys, the smaller HabEx concept would emphasize exoplanet research, focusing on a few nearby stars known to host potentially habitable worlds.

“Rather than statistical-based as LUVOIR is, we’re more exploration-based,” said Scott Gaudi, a professor of astronomy at Ohio State University who co-chairs the HabEx study. “We want to study nearby planetary systems and just figure out what they’re like.”

HabEx could probe up to a dozen potentially Earth-like planets around stars in the sun’s neighborhood, Gaudi said Thursday.

“Our goal is to detect and characterize a handful of potentially habitable planets, and then search for signs of habitability and biosignatures on those planets,” he said.

A mission based on the HabEx concept could perhaps distinguish between analogs of Venus, Earth and Mars, which all lie within the sun’s habitable zone, a region where liquid water could persist on a planet’s surface under the right conditions. But only Earth has an environment ripe for life.

Gaudi said his team will present at least two HabEx mission concepts to the decadal survey panel, one with a single-piece 4-meter (13-meter) primary mirror with nearly twice the collecting area of Hubble, and another with a 6.5-meter (21-foot) segmented mirror comparable to JWST’s.

One option is to launch a separate starshade, a petal-shaped spacecraft tens of meters (up to 100 feet) wide that would keep formation via laser navigation tens of thousands of miles from a telescope such as HabEx. The idea is to block bright starlight, revealing planets lurking nearby.

A tiny coronagraph embedded inside the telescope could also help detectors register exoplanets, allowing instruments to break up the light into spectra like a prism, telling scientists about the chemicals and gases in their atmospheres.

No space telescope has ever flown with a starshade, and coronagraphs aboard current-era observatories like Hubble and JWST are unable to see planets close to their stars, where temperatures might be favorable for life. The WFIRST mission might carry a coronagraph that works in concert with deformable mirrors and ultra-low-noise cameras, yielding views of potentially habitable worlds, but HabEx would have much better sensitivity thanks to a bigger mirror.

Two other concepts under scrutiny would scan the infrared and X-ray universe.

The Origins Space Telescope will probe the births of stars and planets in the Milky Way galaxy, trace the evolution of galaxies throughout cosmic history, seeing through thick envelopes of dust to study regions invisible to other telescopes.

Building on discoveries expected from JWST and WFIRST — both infrared observatories — the Origins Space Telescope would be sensitive to lower-energy far-infrared light, a part of the spectrum that reveals some of the coldest parts of the universe.

“Beyond JWST, we will still have questions,” said Asantha Cooray, a professor at the University of California, Irvine, and co-chair of the Origins Space Telescope study. “We will not how those stars came to be. We want to know and we want to understand what mechanics produce what stars.”

The far-infrared telescope could be as big as 9 meters (30 feet) in diameter, Cooray said Thursday, a size limit set by the volumes of Delta and Falcon rocket fairings.

The Origins Space Telescope could image pockets of tenuous gas and dust in the interstellar medium, the area between stars. Clumps of cold matter glow in far-infrared light.

“We still do not have a probe for the interstellar medium, and that’s where the Origins Space Telescope comes in,” Cooray said.

He said the infrared observatory would also make observations of exoplanets like LUVOIR and HabEx, and potentially detect biosignatures.

“Our science case is broad and covers a wide range of topics,” Cooray said. “Our aim is to provide a factor of maybe between 5,000 and 10,000 improvement in sensitivity relative to the best we had with (ESA’s) Herschel. That’s a large number.”

Cooray said a mission based on the Origins Space Telescope approach would have have a factor of 30 better sensitivity than JWST, not just because of its size but because mechanical coolers would chill the observatory’s detectors below 5 Kelvin (minus 450 degrees Fahrenheit), just above absolute zero. That will make the future telescope capable of seeing frigid parts of the universe.

“We are not trying to take images and improve a little bit,” he said. “We are really talking about revolutionary astronomy with the Origins Space Telescope.”

Astronomers scoping the next potential X-ray telescope are working on the Lynx mission concept.

Billed as a machine for looking back in time to the first billion years after the Big Bang, the Lynx observatory would seek to find the universe’s first black holes and galaxies. Theories currently govern astronomers’ understanding of this era, when light from the first stars could escape through an absorbing haze of hydrogen left over from the Big Bang, but Lynx could add hard data to the equation.

“We have decided what kind of observatory Lynx should be, how big that observatory should be,” said Alexey Vikhlinin, astrophysicist at the Harvard-Smithsonian Center of Astrophysics and co-chair of the Lynx study. “We have identified plans for the X-ray optics. We are in the process of making a decision on the (proposed) instrument suite.”

Vikhlinin said Thursday the Lynx team has identified the drivers of galaxy formation and the dawn of black holes as two key pillars of the would-be mission.

Lynx would also map the distribution of matter in the cosmic web, the voids, clusters and filaments that tie together the universe. Another target would be the halos of material surrounding galaxies’ brightest star-filled regions, which astronomers believe plays an important role in a galaxy’s birth.

Scientists say the Lynx mission would offer a leap in sensitivity two orders of magnitude over Chandra, which launched in 1999, and the planned European-led Athena X-ray telescope due for liftoff in 2028.

But big advances in technology are required to make a mission like Lynx a reality. Vikhlinin said high-resolution lightweight X-ray optics is “the area of most concern for us.” 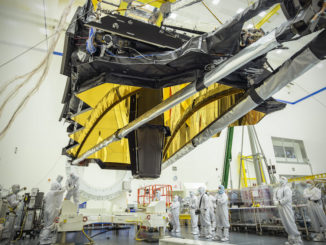 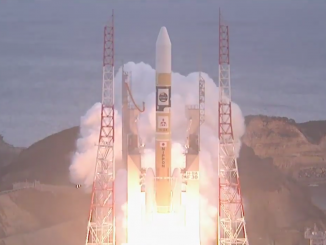