NASA’s newest observatory in space has started its search for planets around other stars, officials said Friday, as astronomers zero in on worlds that are ripe for research by follow-up missions like the James Webb Space Telescope.

The Transiting Exoplanet Survey Satellite officially began a two-year science mission Wednesday, around three months after its blastoff from Cape Canaveral aboard a SpaceX Falcon 9 rocket.

“I’m thrilled that our new planet hunter mission is ready to start scouring our solar system’s neighborhood for new worlds,” said Paul Hertz, NASA’s astrophysics division director. “Now that we know there are more planets than stars in our universe, I look forward to the strange, fantastic worlds we’re bound to discover.”

Equipped with four 16.8-megapixel science cameras, TESS will look for blinks in light coming from relatively bright, nearby stars caused when planets pass in front of them. From those observations, astronomers can determine the size of each newly-discovered planet, then use other techniques such as radial velocity measurements to derive their masses.

TESS is a follow-up to NASA’s Kepler mission, which is nearing the end of its mission searching for planets around other stars. Kepler — NASA’s first mission dedicated to an exoplanet search — generally looked for worlds around more distant stars, resulting in 2,650 new confirmed planets beyond our solar system to date.

The TESS mission is geared to observe stars closer to the sun. In addition, Kepler has only pointed at certain parts of the sky, while TESS will take a broader look.

George Ricker, who leads the TESS science team at MIT’s Kavli Institute for Astrophysics and Space Research, said the exoplanet surveyor is a “finder scope” for the Webb telescope and huge ground-based observatories.

“You can go out on a dark night, and you can see 6,000 stars or so in the sky with your naked eye,” Ricker said. “We’re going to look at every single one of those stars.”

Approximately 20 million stars will be visible by TESS’s light-sensitive cameras, including targets up to a million times fainter than observable with the naked eye, Ricker said. Around 200,000 of those stars are “pre-selected” by the TESS science team for special emphasis because of their proximity and brightness.

“TESS is a survey machine, and it’s going to find the very best planets for us to follow-up, and among that category are these small rocky planets, transiting small red dwarf stars,” said Sara Seager, deputy science director on the TESS mission at MIT, in an interview before the mission’s launch.

That would grow the number of known planets beyond our solar system by factor of five or more, but it’s not all about expanding the exoplanet catalog.

“The focus that TESS has on finding systems associated with bright stars means that they will be much easier to follow-up,” Ricker said in an interview with Spaceflight Now. “Once you find that a transiting system exists, it’s something that you’ll want to come back to and study more and more as improved instruments, satellites and telescopes become available because this is going to be the benchmark for future research.”

That’s where the James Webb Space Telescope becomes a crucial tool for astronomers seeking to learn more about the nature of faraway exoplanets. Scheduled for launch in early 2021, the oft-delayed Webb telescope will be able to probe the atmospheres of some of these worlds, learning about their chemical make-up and searching for evidence that the planets might be habitable.

Once launched, the huge, expandable observatory “will be able to look for characteristic signatures of materials in the atmospheres of those planets … and something that’s potentially a biogenic signature,” Ricker told Spaceflight Now. “Of course, that takes a lot of care and a lot of work. TESS can only point the way to these are the best targets that you should be focusing on with Webb.”

TESS will scan around 85 percent of the sky during its two-year prime mission, beginning with stars in the southern sky. In 2019, the observatory will shift its aim to the northern sky.

The mission will primarily look at M-dwarf stars, which are smaller and cooler than the sun, and make up the majority of the stars in the Milky Way galaxy. Also called red dwarfs, the stars that are TESS’s focus have not been thoroughly investigated to determine whether they harbor their own solar systems.

Since its April 18 launch, TESS has maneuvered into a unique orbit in gravitational resonance with the moon that takes the spacecraft between distances of 67,000 miles (108,000 kilometers) and 233,000 miles (376,000 kilometers) from Earth. In that orbit, TESS makes one loop around Earth about every two weeks.

NASA released the first test image from one of TESS’s four cameras in May, showing roughly 200,000 stars along the plane of our Milky Way galaxy.

The first set of science data from TESS will be downlinked to Earth in August, and NASA said astronomers will immediately begin analyzing the imagery. Software will help scientists cull the data and detect transit signals from exoplanets.

Built by Northrop Grumman Innovation Systems — formerly known as Orbital ATK — TESS fired its thrusters multiple times, and used a gravity assist flyby of the moon May 17, to reach the $337 million mission’s final orbit, a stable perch that requires no further rocket burns and which passes close enough to Earth to transmit full frame images from the craft’s science cameras through a high-speed Ka-band downlink. The orbit also keeps TESS away from the damaging influence of the Van Allen radiation belts.

The spacecraft, which weighed less than a half-ton at launch, carries enough fuel to continue operating up to 20 or 30 years, Ricker said in an interview before TESS’s launch. That assumes NASA funding and spacecraft parts remain robust. 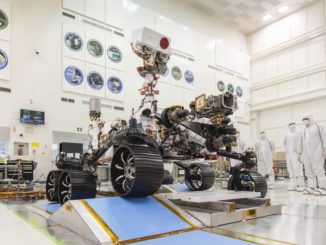 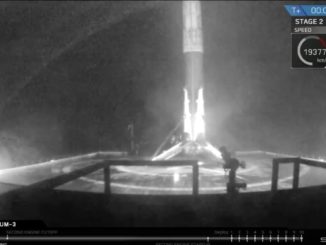 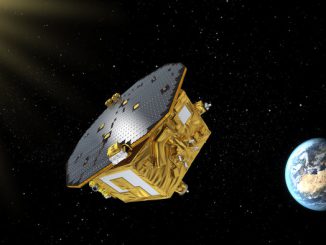