SpaceX’s Dragon supply ship, loaded with nearly 5,500 pounds of cargo and experiments, aborted an approach to the International Space Station on Wednesday after encountering a problem in its GPS navigation system.

The gumdrop-shaped, solar-powered spacecraft was about 1,200 feet, or 365 meters, from the space station when it automatically bailed out of the rendezvous, escaping the immediate vicinity of the research outpost as its safety system intended and setting up for another approach as soon as Thursday.

“The SpaceX engineers are tracing this issue to an incorrect value that was detected in the spacecraft’s Relative Global Positioning System hardware, which basically tells Dragon’s computers, for its burn plan, where it is in the sky relative to the International Space Station,” said Rob Navias, a NASA spokesperson providing commentary on NASA TV.

The Dragon spacecraft’s navigation system works by comparing position data derived from the GPS satellites to determine the range, direction and closing rate between the visiting supply ship and the space station.

Once the cargo craft gets closer to the complex, the navigation system switches to inputs from a pulsed laser ranging instrument and a thermal camera to determine how far Dragon is from the space station.

The rendezvous is fully automated, with the exception of some manual abort, retreat and hold commands.

“SpaceX mission officials are fully confident that that issue can be mitigated, and that the spacecraft can be protected from an incorrect value during the re-rendezvous attempt on Thursday morning,” Navias said. “That will allow Dragon to safely approach the station for a grapple and a berthing to the Earth-facing port on the Harmony module.”

Wednesday’s abort was the first such wave-off by a SpaceX supply ship in 10 cargo deliveries since 2012. NASA’s other cargo transportation provider, Orbital ATK, had to upload a software patch to one of its Cygnus logistics freighters on a flight in 2013 to correct a GPS error, delaying its arrival at the space station by a week.

NASA said the Dragon spacecraft went into a so-called “race track” course in front, above, and then behind the space station to set up for another rendezvous attempt Thursday, part of a predetermined trajectory to be used in case a problem prevents an on-time arrival.

“At no time was the station or the crew in any danger,” Navias said. “Dragon did exactly what it was supposed to do and broke out of its approach.”

Astronaut Mike Hopkins in space station mission control in Houston passed the news on to space station flight engineer Thomas Pesquet, who was preparing to capture the Dragon spacecraft with the lab’s robotic arm.

“I just want let you know that Dragon is on a 24-hour safe trajectory,” Hopkins said. “We had an RGPS filter unconverged, and we’re currently in the works for planning a re-attempt for tomorrow.”

“OK, I copy, thanks for the explanation, and I look forward to welcoming Dragon on-board tomorrow then,” Pesquet replied.

Shortly after 4:30 a.m. EST (0930 GMT), Hopkins radioed space station commander Shane Kimbrough that mission control aims to try for another rendezvous Thursday. If the rendezvous goes ahead, the Dragon cargo craft should be grappled by the station’s robotic arm around 6 a.m. EST (1100 GMT).

“Dragon has plenty of propellant,” Navias said. “Its other systems are in excellent shape, and all of the science on-board the Dragon can withstand a 24-hour re-rendezvous.”

The Dragon spacecraft would approach the space station from below, pausing at several hold points before reaching a “capture box” around 30 feet, or 10 meters, from the outpost.

Pesquet will maneuver the robotic arm to snare the free-floating spaceship, and then ground controllers will take command of the arm to berth Dragon to the station’s Harmony module for unpacking.

The astronauts will unload scientific gear, food and other items stowed inside Dragon’s pressurized compartment, and the station’s robotics systems will pull two experiment packages out of the spaceship’s external payload bay for mounting outside the research complex.

One of the external experiments developed by NASA will monitor changes in Earth’s ozone layer, and the other payload hosts more than a dozen NASA and U.S. military investigations, including a lightning imager and a testbed to gather data for future satellite servicing missions.

Wednesday’s Dragon rendezvous wave-off came a few hours after a Russian Progress refueling and resupply freighter launched from the Baikonur Cosmodrome in Kazakhstan.

The Progress MS-05 spacecraft is on track to dock with the space station’s Pirs module at 3:34 a.m. EST (0834 GMT) Friday, less than 24 hours after Dragon’s new arrival time. 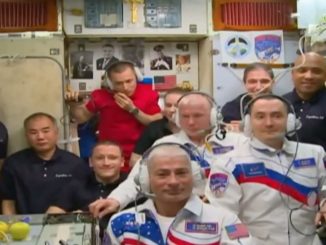 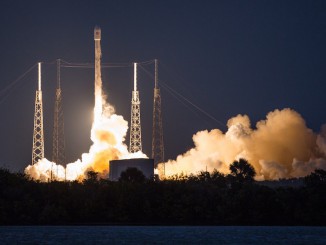 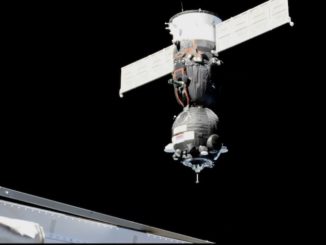