Ground crews towed a towering Ariane 5 rocket to its launch pad in French Guiana on Wednesday for final flight preparations before Thursday’s launch with spacecraft for two of the world’s top commercial satellite operators.

The rocket made the trip from the Guiana Space Center’s final assembly building to the ELA-3 launch zone Wednesday morning. Technicians planned to connect the heavy-duty launcher with the pad’s electrical, communications and propellant systems later Wednesday before commencing the final countdown before dawn Thursday.

Standing 18 stories tall and pulled by a 540-horsepower Titan tug with high-precision steering, the Ariane 5 and its mobile launch platform rode rail tracks for the 1.7-mile journey from the final assembly building to the launch pad.

Thursday’s launch marks the 81st flight of an Ariane 5 rocket and the 225th launch in the history of the Ariane family dating back to 1979. It is the fourth Ariane 5 launch this year.

Two communications satellites are packaged inside the Ariane 5’s nose cone for Eutelsat and Intelsat.

The larger of the two payloads, Eutelsat 8 West B, sits in the upper position of the Ariane 5’s dual-satellite stack and will separate about 28 minutes after liftoff. The smaller Intelsat 34 communications satellite rides in the lower berth and deploys nearly 42 minutes into the mission.

The Ariane 5 will drop off the spacecraft into an egg-shaped geosynchronous transfer orbit, then the satellites will power up on-board rocket thrusters to circularize their orbits 22,300 miles above the equator in the coming days.

Eutelsat 8 West B weighs 12,747 pounds — nearly 5.8 metric tons — with a full tank of propellant at launch. Built by Thales Alenia Space, the satellite will be positioned in geosynchronous orbit at 8 degrees west longitude for a design life of at least 15 years.

Eutelsat plans to use the new satellite to broadcast high-definition television and Ultra HD services to the Middle East and North Africa with an on-board complement of 40 Ku-band transponders. Another 10 C-band transponders will provide other telecommunications connectivity to customers in Africa and South America, according to Eutelsat.

The Intelsat 34 spacecraft, made in California by Space Systems/Loral, is a multi-purpose telecom platform.

Designed for a geosynchronous slot at 55.5 degrees west, Intelsat 34 will broadcast direct-to-home television signals to Brazil and distribute video services across Latin America for major programmers such as Fox and HBO. It will beam Internet connectivity to airliners and ships traveling the North Atlantic, helping travelers stay connected on the go. 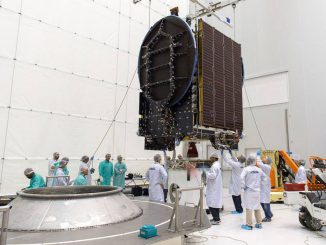 Last Ariane 5 flight of the year cleared for launch 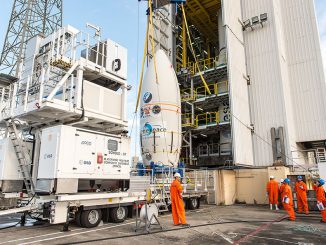 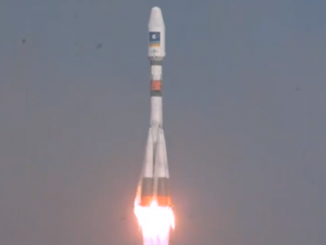