After a lull in launches from America’s primary West Coast rocket base, SpaceX is set to resume a regular cadence of missions from Vandenberg Air Force Base as soon as July to deploy Starlink internet satellites into polar orbits, SpaceX’s president and industry officials said.

The launches from Vandenberg will allow SpaceX’s ever-growing Starlink network to fill in coverage gaps and provide internet connectivity over the poles.

Gwynne Shotwell, SpaceX’s president and chief operating officer, said Tuesday that the company plans to start launching more Starlink satellites into polar orbit this summer. So far, nearly all of the Starlink satellites launched by SpaceX have gone into 341-mile-high (550-kilometer) orbits tilted at an inclination of 53 degrees to the equator.

Speaking on a virtual panel arranged as part of the Satellite 2021 industry conference, Shotwell said Tuesday that SpaceX has roughly 1,320 Starlink satellites currently in orbit. That’s more than six times as many active satellites as owned by any other single operator.

All those satellites flew into orbit on SpaceX’s own Falcon 9 rockets from Florida’s Space Coast.

SpaceX has launched 1,385 Starlink satellites to date, including failed spacecraft and prototypes already removed from orbit.

“We do have global reach but we don’t have full connectivity globally,” Shotwell said. “We hope after about 28 launches, we’ll have continuous coverage throughout the globe. And then the plan after that is to continue to add satellites to provide additional capacity.”

The next launch with 60 Starlink satellites is scheduled for 12:34 p.m. EDT (1634 GMT) Wednesday from Cape Canaveral Space Force Station. It will be the 23rd Falcon 9 launch dedicated to hauling operational Starlink satellites, known as Version 1.0, into orbit, and the 26th Falcon 9 mission overall with Starlink payloads on-board.

SpaceX launched the first 10 operational Starlink satellites into polar orbit Jan. 24 on a rideshare mission with 133 other small spacecraft.

The Federal Communications Commission has authorized SpaceX to deploy some 12,000 Starlink satellites operating at Ku-band, Ka-band, and V-band frequencies, and at a range of altitudes and inclinations in low Earth orbit. Last April, SpaceX requested approval from the FCC to operate its Starlink satellites at lower altitudes than initially planned, all between 335 miles (540 kilometers) and 354 miles (570 kilometers).

SpaceX said the change in altitude would reduce latency of internet signals and allow the company to build out its network more quickly. The company pitched the proposed change as also enabling improved internet connectivity over polar regions, a capability desired by the U.S. military, and reducing the risk that dead or failed satellites might become a long-term source of space junk.

In November, SpaceX sought authorization from the FCC to fly 348 Starlink satellites in sun-synchronous orbits at an altitude of 348 miles (560 kilometers). Those satellites would launch into polar orbits inclined 97.6 degrees to the equator.

“We will do some polar launches starting this summer to get connectivity over the poles as well,” she said.

Shotwell confirmed SpaceX’s previous statements that the polar-orbiting satellites, which will fly in a north-south track around Earth, will have inter-satellite laser links. The laser communication terminals were aboard the 10 Starlink satellites launched into a polar orbit Jan. 24.

Laser inter-satellite links will allow SpaceX to route communications signals between the spacecraft in the Starlink constellation, eliminating the equipment to pass the internet traffic through a ground station. SpaceX currently uses ground stations scattered around the United States to operate the Starlink network for beta testing.

“We don’t currently have laser links on the (Version) 1.0 satellites, although the polar satellites, we hope to have a good laser system operating for those,” Shotwell said.

During SpaceX’s webcast of the Jan. 24 launch with the first service-capable polar-orbiting Starlink satellites, a company official said many of the future Starlink spacecraft launching into polar orbit will take off from Vandenberg Air Force Base in California.

SpaceX launched the first two prototype Starlink satellites from Vandenberg in 2018, but all Starlink spacecraft since then have taken off from Florida.

Industry officials have also recently said SpaceX aims to start launching Falcon 9 rockets from Vandenberg with Starlink satellites as soon as July. Officials said SpaceX could ramp up to a cadence of launching one Starlink mission per month from the California launch base overlooking the Pacific Ocean some 140 miles (225 kilometers) northwest of Los Angeles.

Two Falcon 9 missions from Cape Canaveral have launched payloads into polar orbit, employing a southerly trajectory that goes parallel to Florida’s East Coast. The southerly launch corridor had not been used for a rocket launch from Florida’s Space Coast since the 1960s until SpaceX used it last year.

Both of SpaceX’s polar launch missions from Cape Canaveral have carried relatively light payloads. The trajectory toward the south requires the Falcon 9 rocket to devote some of its propellant to slightly change direction after liftoff, a maneuver that ensures the launcher would not drop debris over South Florida.

That maneuver reduces the weight the Falcon 9 can carry into orbit. A straight shot into orbit from Vandenberg would maximize the rocket’s payload lift capability.

The current version of the Starlink satellites weigh around 573 pounds (260 kilograms). Each spacecraft has a krypton-fueled electric propulsion system, communications antennas, a deployable solar panel, and a sun-blocking visor to reduce the satellite’s visibility from the ground.

That launch rate is sure to pick up with the start of Starlink missions from Vandenberg. SpaceX has at least two more Falcon 9 launches confirmed from Vandenberg this year — a mission in September to loft the first batch of next-generation commercial WorldView Legion Earth observation satellites for Maxar, and a flight in November with NASA’s Double Asteroid Redirection Test spacecraft.

SpaceX’s second dedicated small satellite rideshare mission, known as Transporter-2, was previously slated to launch in June from Vandenberg. Officials with payloads on that mission have said in recent weeks that SpaceX moved Transporter-2 launch to Cape Canaveral. 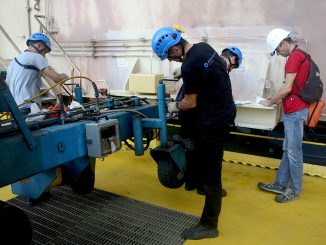 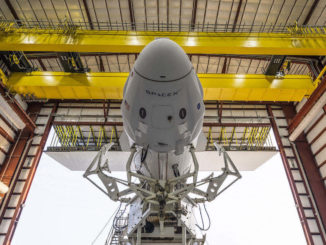 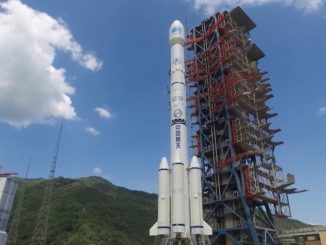