Six satellites are set to ride a light-class European Vega rocket into orbit from French Guiana on Wednesday night, the first Vega launch since a failure last year that officials attributed to human error.

The prime payload on the four-stage Vega launcher is Pléiades Neo 3, a high-resolution Earth-imaging satellite built and owned by Airbus. Pléiades Neo 3 is the first of four French-built next-generation Pléiades with sharp eyes and the ability to rapidly beam their reconnaissance imagery back to military, scientific, and commercial customers.

Five smaller payloads for the Norwegian Space Agency, NanoAvionics, Spire, and Eutelsat will accompany Pléiades Neo 3 into orbit on top of the Vega launcher.

The launch is crucial for Arianespace, the French launch services firm that oversees Vega launches, and Italy-based Vega prime contractor Avio. Two of the last three Vega rockets have failed to place their payloads into orbit, for different reasons.

After 14 straight successful flight since its debut launch, a Vega rocket lost control about two minutes after liftoff in July 2019 with the Falcon Eye 1 military surveillance satellite for the United Arab Emirates. The launcher and payload crashed into the Atlantic Ocean.

Investigators traced the cause of the accident to a “thermo-structural failure” on the forward dome of the Vega rocket’s solid-fueled second stage, allowing hot gas to damage the motor’s casing and leading to the in-flight breakup of the launch vehicle.

Engineers beefed up thermal insulation and improved quality control checks, and the next Vega launch in September 2020 successfully placed 53 small commercial and government satellites into orbit, a record number of payloads on a single Arianespace mission.

But failure struck again on the next Vega launch Nov. 16.

Officials concluded that cables leading to thrust vector control actuators on the Vega’s Attitude and Vernier Upper Module, or AVUM, were inverted, a mistake from the assembly of the upper stage engine. The thrust vector control system pivots the upper stage engine nozzle to direct thrust, allowing the rocket to control its orientation and steering.

Quality control checks before the launch missed the cable installation error, which caused the engine to move its nozzle in the wrong direction in response to commands from the rocket’s guidance system. That resulted in the rocket losing control and tumbling just after ignition of the upper stage engine around eight minutes after launch with the SEOSAT-Ingenio and Taranis satellites.

Officials from Arianespace and the European Space Agency, which led the failure investigation, stressed last year that the failure on the Nov. 16 launch was attributable to human error, and not a design fault like the one that caused the July 2019 launch mishap.

Managers ordered additional inspections of already-built rocket components to ensure they are free of the problem that caused the failure in November, clearing the way for a resumption of Vega missions.

Arianespace has found success in selling Vega launches to ESA and the European Commission, which owns Europe’s fleet of Copernicus environmental satellites. National space agencies across Europe and in other parts of the world have also purchased rides on Vega rocket for their small satellites.

Startups and other commercial satellite operators have also secured slots on Vega rideshare missions, including the launch set to blast off Wednesday night.

An upgraded version called the Vega C will feature larger first and second stage motors, plus a widened payload berth, increasing the rocket’s payload carrying capacity to about 4,850 pounds (2.2 metric tons) to the same orbit. The first Vega C launch is now scheduled for early 2022.

The Vega rocket flying Wednesday night will blast off from the Guiana Space Center and head north over the Atlantic Ocean, targeting a polar orbit with its six satellite payloads.

The rocket’s three solid-fueled boost stages will fire and burn out in succession in the first six minutes of the mission, leaving the AVUM upper stage’s hydrazine-fed engine to maneuver the six satellites into orbit.

A first firing by the AVUM engine will cut off about 16 minutes after liftoff, and the rocket will coast over the North Pole and head south on the other side of the world before reigniting at Plus+52 minutes.

That will set the stage for deployment of the 2,028-pound (920-kilogram) Pléiades Neo 3 satellite at Plus+54 minutes, 29 seconds. The rocket will aim to release Pléiades Neo 3 into a 390-mile-high (628-kilometer) sun-synchronous orbit with an inclination of 97.89 degrees to the equator.

Two more AVUM engine burns will reduce the rocket’s altitude to 380 miles (613 kilometers) and adjust its inclination to 97.79 degrees before deployment of the remaining five satellites at T+plus 1 hour, 41 minutes.

The Pléiades Neo 3 spacecraft will improve on Airbus’s first-generation Pléiades Earth observation satellites launched in 2011 and 2012. Another Vega launch later this year will carry the Pléiades Neo 4 satellite into orbit, and a Vega C launch in 2022 will loft the final two Pléiades Neo payloads on a single mission, taking advantage of the new rocket’s increased capabilities.

Airbus says it entirely funded the development of the Pléiades Neo satellites, with intentions to sell the imagery commercially to private companies and government users. The company assembled the spacecraft at its facility in Toulouse, France.

“Pléiades Neo is a game changer for Airbus and its geo-intelligence customers,” said Jean-Marc Nasr, head of space systems at Airbus. “Thanks to our disruptive and bold investments we can offer a state of the art constellation delivering 30cm (11.8-inch) resolution imagery in near real-time, opening up a completely new range of applications to give our customers more detail, more quickly.”

The imaging resolution of Airbus’s four Pléiades Neo satellites is comparable to the resolution provided by Maxar’s six-satellite WorldView Legion surveillance satellites due to begin launching later this year. The companies are competitors, providing the highest-resolution Earth observation imagery on the global commercial market.

With the help of laser inter-satellite communications links, the Pléiades Neo satellites will be able to respond rapidly to tasking requests within 30 to 40 minutes, according to Airbus.

The five rideshare payloads on Wednesday night’s mission are mounted to a fixture below the Pléiades Neo 3 satellite inside the Vega rocket’s Swiss-made payload fairing.

There is also a briefcase-sized satellite built by NanoAvionics integrated with a radio frequency characterization payload from Denver-based startup Aurora Insight. The Bravo satellite, set for launch on the Vega rocket, joins the identical Charlie smallsat that flew into orbit on a SpaceX rideshare mission in January.

Two commercial CubeSats — also about the size of a briefcase — are on-board to join Spire’s ship tracking and commercial weather data collection fleet. 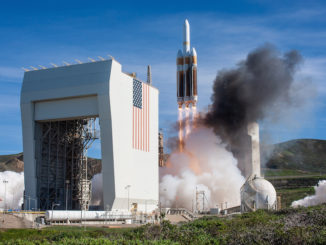 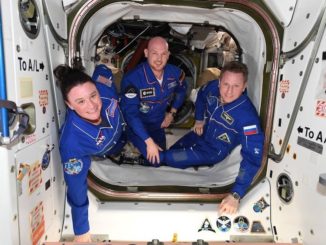 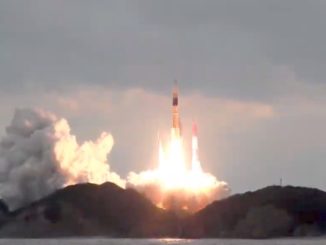