A United Launch Alliance Delta 4-Heavy rocket climbed into orbit Monday from a military base northwest of Los Angeles, delivering to space a classified U.S. government spy satellite as large as a school bus and leaving just three Delta rockets left to fly before retirement.

The top secret cargo for the National Reconnaissance Office, owner of the U.S. government’s spy satellites, rocketed off a hillside launch pad at Vandenberg Air Force Base around 140 miles (225 kilometers) northwest of Los Angeles.

The 233-foot-tall (71-meter) Delta 4-Heavy rocket — one of the most powerful launchers in the world — ignited its three hydrogen-fueled Aerojet Rocketdyne RS-68A engines in a staggered sequence seconds before liftoff at 1:47 p.m. PDT (4:47 p.m. EDT; 2047 GMT).

After a hydrogen fireball erupted around the base of the rocket — a tell-tale signature of all Delta 4 launches — the triple-body launcher ascended from Space Launch Complex-6 at Vandenberg, a facility originally constructed to support flights of military astronauts and NASA space shuttles.

Those plans never materialized, and the Delta 4 program moved into the SLC-6 launch pad.

On the ninth Delta 4 launch from SLC-6, the rocket’s three main engines generated 2.1 million pounds of thrust at full power, equivalent to 51 million horsepower, to propel the mission over the Pacific Ocean.

Heading south from Vandenberg, the Delta 4-Heavy surpassed the speed of sound nearly a minute-and-a-half into the mission.

The core engine of the triple-body rocket ran at a partial thrust setting for the first few minutes of the flight to save propellant. The side boosters consumed their fuel and shut down their engines at T+plus 3 minutes, 56 seconds. The expendable boosters jettisoned two seconds later to fall into the Pacific Ocean.

The Delta 4-Heavy’s payload fairing jettisoned at T+plus 6 minutes, 7 seconds. That signaled the end of ULA’s launch broadcast, which concluded on orders from the NRO to conceal details about the rest of the launch sequence.

“Today’s liftoff demonstrates the often unseen work from men and women in the IC (Intelligence Community) who are dedicated to advancing our nation’s security — including to heights ‘above and beyond’ Earth,” said Avril Haines, the director of national intelligence, who witnessed the launch Monday. “I am so honored to serve alongside extraordinary professionals and enjoyed watching their innovation, collaboration, and impact take to the skies.”

“NROL-82 will strengthen NRO’s ability to provide a wide-range of timely intelligence information to national decision-makers, warfighters, and intelligence analysts to protect the nation’s vital interests and support humanitarian efforts worldwide,” the NRO said in a statement.

“The payload launched today is one of the most complex payloads our nation launches and it provides vital space capability,”  said Col. Robert Bongiovi, director of the launch division at the Space Force’s Space and Missile Systems Center  “That’s why we have to get it right the first time. The launch team performed flawlessly and I am so proud of the work they do to ensure 100 percent mission success.”

Like nearly all its missions, the NRO did not disclose any details about the satellite launched by the Delta 4-Heavy rocket Monday.

Independent analysts believed the Delta 4-Heavy rocket was likely to deliver the NRO’s next KH-11 optical reconnaissance satellite to orbit. The KH-11 satellites are about the size of a bus, fitted with large telescopes pointing down at Earth to collect unmatched high-resolution images of strategic locations around the world for analysis by U.S. intelligence agencies.

Often called “Keyhole” satellites, the KH-11 spacecraft require the heavy-lifting capability of the Delta 4-Heavy, along with the rocket’s voluminous payload shroud. All of the Delta 4-Heavy missions from Vandenberg have carried KH-11 satellites to space. The exact imaging capabilities of the KH-11 satellites are top secret, and the NRO does not publicly identify the types of spacecraft on each of its launches.

Information about the Delta 4-Heavy rocket’s post-launch trajectory released by ULA and published in open navigational warnings indicate the launcher will head slightly west of due south from Vandenberg, according to Marco Langbroek, a Dutch archaeologist and an expert in the orbits of military satellites.

The ground track suggests the Delta 4-Heavy will place its cargo into a sun-synchronous polar orbit with an inclination of about 98 degrees to the equator, Langbroek wrote on his website.

The timing of the launch Monday closely aligns with the orbital plane of a KH-11 satellite launched in January 2011 aboard a previous Delta 4-Heavy mission. The new satellite might be a replacement for that 10-year-old spacecraft.

The NRO has at least three active KH-11 satellites launched in 2005, 2011, and 2013, all flying in the same type of sun-synchronous orbit. The most recent Delta 4-Heavy launch from Vandenberg in 2019 deployed its NRO spy satellite cargo into a different orbit, raising questions whether it carried a KH-11 satellite or another kind of clandestine spacecraft.

Ted Molczan, an experienced satellite tracker in Canada, agreed with Langbroek’s assessment that the NROL-82 mission will haul a KH-11-type satellite into space.

In 2019, former President Donald Trump tweeted a declassified image widely believed to be from a KH-11 satellite, showing damage on an Iranian launch pad after a rocket explosion. Using sun angles, civilian sleuths estimated the time the picture was taken, then cross-checked the time with the known positions of NRO spy satellites.

ULA, a 50-50 joint venture between Boeing and Lockheed Martin, has three Delta 4-Heavy rockets left to launch in the next few years. All are assigned to haul top secret satellites into space for the National Reconnaissance Office, which owns the U.S. government’s fleet of orbiting spy platforms.

The rest of the Delta rocket family, including the single-core Delta 4-Medium, has been retired as ULA transitions to the next-generation Vulcan Centaur rocket. The Delta 4-Heavy, created by joining there Delta 4 common booster cores together, is tailored for carrying the U.S. government’s largest intelligence-gathering spacecraft into orbit.

One of the remaining Delta 4-Heavy missions will launch from Vandenberg. Two more are scheduled to lift off from a launch pad at Cape Canaveral Space Force Station in Florida.

“The unmatched power of the Delta 4-Heavy again demonstrated its role as the nation’s proven heavy lift vehicle precisely delivering this critical NRO asset to its intended orbit,” said Gary Wentz, ULA vice president of government and commercial programs, in a post-launch statement Monday. “We are honored to support national security space and thank our mission partners for their continued trust and teamwork.”

The NROL-82 mission was ULA’s first launch of 2021. If the rest of ULA’s launch schedule remains on track, the company could conduct as many as 10 missions before the end of December, but the majority of the flights aren’t expected to take off until the second half of the year.

The next ULA mission is set for launch May 17 from Cape Canaveral with an Atlas 5 rocket. That flight will deliver a U.S. Space Force missile warning satellite to orbit. 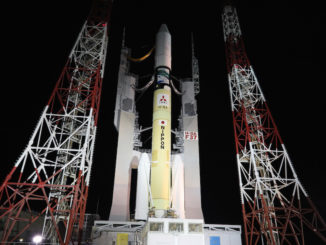 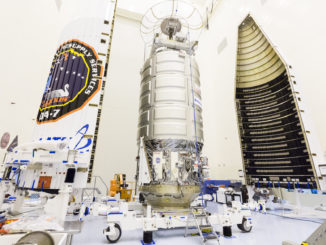 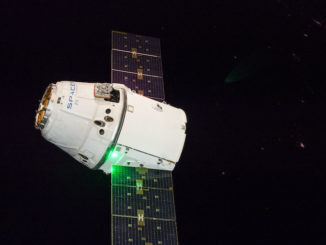