Blue Origin, the space company founded by billionaire Jeff Bezos, took another step toward launching people to the edge of space Wednesday with a suborbital test flight of its New Shepard booster and crew capsule over West Texas.

The company rehearsed how passengers will board and disembark from the spacecraft before and after the flight.

“It’s time,” Bezos wrote on Instagram after the flight Wednesday, suggesting Blue Origin plans to move forward with suborbital launches carrying human passengers. But company officials offered no timetable on when the New Shepard might carry people above the atmosphere.

The 60-foot-tall (18-meter) New Shepard rocket and crew capsule lifted off from Blue Origin’s desert test facility north of Van Horn, Texas, at 11:51 a.m. CDT (12:51 p.m. EDT; 1651 GMT) Wednesday after a delay of more than one hour due to unspecific issues.

The single-stage booster took off powered by a hydrogen-fueled BE-3 engine generating 110,000 pounds of thrust, and quickly cleared the launch pad tower and rocketed through the atmosphere. After exceeding the speed of sound, the BE-3 engine cut off and the crew capsule separated from the top of the rocket to coast to an apogee, or high point, just above the internationally-recognized boundary of space 62 miles (100 kilometers) above the planet.

Without the speed required to enter orbit around Earth, the capsule and rocket began descending back to Earth after reaching the apex of its suborbital trajectory.

The New Shepard booster deployed an air brake, reignited its throttleable BE-3 main engine, and extended landing legs for a vertical touchdown back at Blue Origin’s West Texas test site around seven-and-a-half minutes after liftoff. The capsule, meanwhile, unfurled three parachutes for a landing nearby about 10 minutes after launch.

Blue Origin hailed the test flight as another step toward flying humans to space on-board the New Shepard.

Wednesday’s flight marked the 15th flight of a New Shepard booster and crew capsule, and the second launch and landing of Blue Origin’s newest reusable rocket and spacecraft.

Blue Origin has already launched scientific experiments to space for NASA, but the New Shepard is designed to fly space tourists, scientists, and commercial and government astronauts above the atmosphere, providing expansive views and a brief taste of microgravity.

The New Shepard’s hydrogen-fueled BE-3 engine has shut down, and the crew capsule has separated from the rocket to coast toward apogee.

Both vehicles will return to Earth within minutes for landing.https://t.co/lKN8NHZo6r pic.twitter.com/Jl6kLpb4fW

Blue Origin personnel rehearsed how customers will board the six-seat crew capsule before Wednesday’s launch. Four employees stood in as astronauts and rode to the launch pad inside a Ford SUV with two support crew members.

After arriving at the pad, the astronaut stand-ins climbed stairs up the launch pad tower and walked across an access gantry leading to the spacecraft sitting atop the already-fueled New Shepard booster. Two employees — Gary Lai, Blue Origin’s New Shepard designer, and Audrey Powers, the company’s vice president of legal and compliance — entered the capsule through the hatch and strapped into seats.

The other four seats aboard the spacecraft — named “RSS First Step” — were occupied by boxes containing children’s postcards and Mannequin Skywalker, Blue Origin’s flight suit-clad test dummy that has flown on past launches.

After a few minutes, Lai and Powers exited the spacecraft and the crew evacuated the launch pad before liftoff.

Blue Origin crews at the West Texas test site also practiced how they will help passengers out of the capsule after landing. Recovery teams quickly converged on the spacecraft after touchdown in the desert, and approached the capsule with mobile stairs and other equipment.

The dress rehearsal Wednesday was the first time Blue Origin has practiced in real conditions how it will help passengers board the spacecraft on top of a booster fully loaded with liquid hydrogen and liquid oxygen propellants.

The company has not said how much it will charge customers for a ride to the edge of space on the New Shepard rocket. But NASA is interested in flying researchers and astronauts on the booster to conduct scientific experiments and to train for longer-duration flights in orbit.

Wealthy individuals could also pay for a flight to space on the New Shepard.

Blue Origin is competing with Virgin Galactic, founded by billionaire Richard Branson, in the suborbital space tourism market. Virgin Galactic’s spacecraft is carried aloft under a giant aircraft, then released to ignite a rocket motor to climb above the discernible atmosphere.

The spaceplane then returns to a runway landing at Spaceport America, a sprawling facility in New Mexico.

Blue Origin’s crew-rated capsule has landed with the aid of three parachutes and retrorockets. https://t.co/lKN8NHZo6r pic.twitter.com/5AtWLopbcz

“For New Shepard, we’ve been following an aggressive step by step approach from the beginning,” said Lai, the vehicle’s chief designer, in a promotional video produced by Blue Origin. “Because it is a robotic vehicle, we have the advantage of being able to take it through an entire flight test program to make sure it’s safe for astronauts. We think it’s very important, not only to show that we have a very robust design, but that we can repeat the feat over and over again until we are satisfied that we have enough data to fly people on it.”

On previous test flights, Blue Origin demonstrated the capsule’s abort rockets can safely propel the spacecraft and its passengers away from a rocket failure, whether it occurs before liftoff on the pad, or in flight.

“The capsule is the most highly redundant and safe spaceflight system we think that has ever been designed or flown,” Lai said. “Every detail on that capsule, no matter how small, has been thought through carefully. We also did not compromise on fault tolerance. And that’s the idea that you have redundancy, that if a system fails, you have the backup system, and in most cases, you have a backup to the backup system.”

The countdown is holding to allow time for personnel to depart the launch site.

Along with the six passenger seats, the capsule is outfitted crew display panels, and speakers with a microphone and push-to-talk button at each seat, according to Blue Origin.

The push-to-talk button will allow passengers to speak with mission control during a flight. There’s also a crew alert system to give passengers safety messages, and a liner inside the cabin wall provides cushioning for passengers as they float inside, and helps suppress engine noise during launch.

The New Shepard booster is a stepping stone toward Blue Origin’s loftier ambitions of launching cargo and people into Earth orbit, and eventually to more distant destinations in the solar system.

The company’s huge orbital-class New Glenn rocket is scheduled for its debut launch in late 2022 from Cape Canaveral Space Force Station, Florida. Blue Origin announced in February a delay in the New Glenn rocket’s first launch from 2021 until next year.

Blue Origin is also competing with SpaceX and Dynetics to develop a human-rated lunar lander for NASA’s Artemis program, which aims to return astronauts to the moon for the first time since 1972. 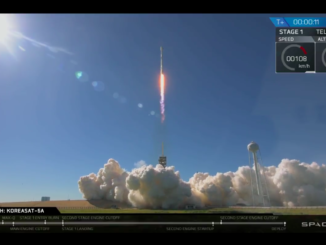 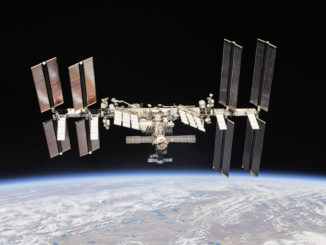