The 500-foot (150-meter) “hop” test was the first of a Starship rocket with full-size propellant tanks, and it sets the stage for a series of progressively higher atmospheric demonstration flights with future vehicles. Eventually, SpaceX aims to shoot the Starship into orbit on top of an even taller booster rocket named the “Super Heavy” to deliver to space huge cargo loads, satellites, telescopes, and science probes.

SpaceX’s longer-term roadmap includes an in-orbit refueling capability to make trips to the moon possible. NASA selected SpaceX’s Starship vehicle as one of three contenders — alongside Blue Origin and Dynetics — for a human-rated lunar lander the space agency will fund for crewed moon missions later this decade.

And the Starship is central to the vision of Elon Musk, SpaceX’s billionaire founder, who established the company with a mission of sending people to Mars. Future Starships could cruise to Mars with up to 100 people, Musk says.

That mission took a step closer to reality with Tuesday’s test flight, which was intended to test out the Starship’s guidance system, the structural strength of its stainless steel tanks, and a number of other basic functions before attempting launches to higher altitudes.

SpaceX followed that up with an attempt to fly the Starship Monday evening in South Texas, but the company aborted the flight just before takeoff. Another countdown Tuesday afternoon was likewise aborted before SpaceX pressed ahead with a successful flight Tuesday evening.

One of SpaceX’s Raptor engines, fed by methane and liquid oxygen, powered the Starship off its launch platform at 7:57 p.m. EDT (6:57 p.m. CDT; 2357 GMT) Tuesday. The throttleable Raptor engine produces up to 440,000 pounds of thrust at full power, according to SpaceX, and it’s the most powerful methane-fueled rocket engine ever flown.

Live videos of the test streamed on YouTube showed the rocket climb away from the launch stand at SpaceX’s test site at Boca Chica, Texas, located just east of Brownsville on the Gulf of Mexico near the U.S.-Mexico border. After swiveling its Raptor engine to maintain control, the shining silver testbed reached its maximum altitude before commencing its descent, deploying landing legs, and settling on flat ground after laterally covering about the length of a football field in its approximately 45-second flight.

A full-scale prototype of the huge Starship vehicle SpaceX says will fly people to the moon and Mars flew for the first time Tuesday in South Texas.

SpaceX has additional Starship vehicles in production at the Boca Chica site, and one of those could attempt a flight up to 65,000 feet, or 20 kilometers. A timetable for that test flight has not been announced by SpaceX or Elon Musk.

The higher-altitude experiments will require SpaceX to install an aerodynamic nose cone on future Starship vehicles, along with fins and other aerosurfaces. Higher flights will also need three Raptor engines, before SpaceX finally goes to a six-engine Starship configuration for orbital missions, which will also require a heat shield for re-entry.

With the nose cone added, the Starship vehicle will reach a height of around 164 feet, or 50 meters. The vehicle that flew Tuesday measures around 30 feet (9 meters) in diameter, about one-and-a-half times the diameter of a Boeing 747 jumbo jet.

Combined with the Super Heavy first stage, the entire stack will stand around 394 feet (120 meters) tall. The Super Heavy will be powered by more than 30 Raptor engines, according to SpaceX, making it the most powerful rocket ever built — generating some 16 million pounds of thrust.

An operational Starship could haul more than 100 metric tons, or 220,000 pounds, of cargo to low Earth orbit, SpaceX says.

Each explosion during testing proved little more than a minor setback, and SpaceX quickly moved on to the next Starship prototype as part of the company’s fast-paced iterative development process.

Speaking to reporters and space fans last September, Musk suggested the first Starship prototype could perform a high-altitude atmospheric test flight before the end of 2019. That didn’t happen, but the high-altitude flight now appears within reach.

SpaceX says it will eventually replace its current fleet of space vehicles — the Falcon 9 and Falcon Heavy rockets, and the Dragon spaceship — with the Starship. But those vehicles won’t be retired until SpaceX proves out the Starship’s capabilities and reliability.

NASA officials were closely watching the Starship test flight Tuesday, which followed a successful test-firing of the vehicle on the launch stand at Boca Chica last week. Thomas Zurbuchen, head of NASA’s science mission directorate, tweeted his congratulations to SpaceX.

And when the smoke cleared, she stood there majestically, after the 150 meter flight!

While NASA is considering the commercial Starship rocket as a vehicle to ferry astronauts between lunar orbit and the moon’s surface, the agency’s plans for returning humans to the moon in the 2020s rely on the government-owned Space Launch System heavy-lift rocket and Orion crew capsule to transport astronauts from the Earth to the vicinity of the moon.

Once in orbit around the moon, the Orion crew capsule would link up with a human-rated lunar lander — possibly a Starship — to fly the astronauts to the moon’s surface, then boost them back into space to rendezvous with Orion for the return trip to Earth.

NASA Administrator Jim Bridenstine has said the SLS and Orion vehicles offer the only opportunity to launch astronauts off the Earth toward the moon by 2024, the timetable for a crewed lunar landing set last year by the Trump administration. But that could change after 2024 if SpaceX’s Starship, or other vehicles, come online.

NASA has purchased rides for astronauts on SpaceX’s Crew Dragon spacecraft to the International Space Station in low Earth orbit, and SpaceX is under contract to deliver cargo to the planned Gateway mini-space station in lunar orbit — a future staging point for expeditions to the moon’s surface — beginning as soon as 2024.

“So we don’t want to discount it,” Bridenstine said. “We want to move forward. If they can have success, we want to enjoy that success with them.” 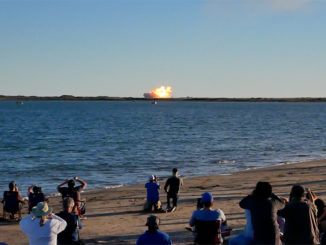 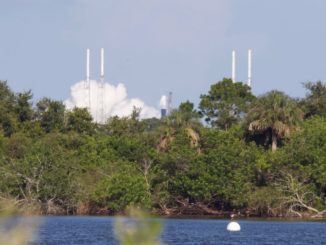