U.S. and Russian vehicles ferrying crews and cargo will continue traveling to and from the International Space Station this month, sustaining the orbiting lab in its 20th year of continuous human occupation amid an escalating pandemic on Earth.

NASA has deemed the space station’s continued operations a top priority as other agency programs are shut down or slowed during the coronavirus pandemic.

Under the command of controllers on the ground, the station’s Canadian-built robotic arm and the two-armed robotic aide Dextre installed the Bartolomeo platform outside the space station’s European Columbus science module.

The process to install the platform occurred over two days, NASA said, after the robotic arm pulled the Bartolomeo science deck from the unpressurized trunk of a SpaceX Dragon cargo capsule. The Dragon cargo freighter delivered Bartolomeo and an array of other hardware and science experiments to the space station March 9 following a launch from Cape Canaveral.

But a spacewalk to route wiring and bring the Bartolomeo facility into use has been postponed. The excursion was originally planned in mid-April, when the space station is temporarily back at a full staffing level of six crew members.

Gary Jordan, a NASA spokesperson, said Wednesday that station managers are no longer pursuing a spacewalk during the crew handover later this month, the period between the arrival of a fresh three-man crew and the departure of the station’s outgoing Expedition 62 crew.

“The decision was made after an evaluation of crew time during the eight-day handover period,” Jordan said.

Once the final wiring harnesses are configured on a future spacewalk, Bartolomeo will be ready to host experiments, expanding the station’s research capability.

The Bartolomeo platform features 12 different mounting sites to accommodate science payloads, experiments, and technology demonstration packages. Developed by Airbus Defense and Space in partnership with the European Space Agency, the new facility is aimed at offering accommodations for commercial experiments outside the orbiting complex.

The Dragon supply ship is scheduled to be released from the space station’s robotic arm at 9:52 a.m. EDT (1352 GMT) Monday, heading for re-entry and a parachute-assisted splashdown in the Pacific Ocean southwest of Los Angeles.

Before Monday’s release, the Dragon will be unberthed from the station’s Harmony module using the robot arm and maneuvered to a position around 30 feet, or 10 meters, below the research complex.

Closing out a nearly 31-day mission, the unpiloted cargo capsule will move a safe distance from the station before firing its Draco thrusters in a braking burn to slow down and re-enter the atmosphere. After jettisoning its disposable trunk, the pressurized capsule will plunge into the atmosphere, protected by a high-temperature heat shield, then deploy three main parachutes for a relatively gentle splashdown in the Pacific Ocean around 3:40 p.m. EDT (1940 GMT).

A SpaceX recovery team will be on station to pull the reusable spacecraft from the sea and haul it to the Port of Los Angeles, where teams will begin handing over time-sensitive experiment specimens and more than 4,000 pounds of cargo to NASA.

The Dragon capsule’s return to Earth on Monday will mark the final flight of SpaceX’s first-generation cargo vehicle after 20 trips to the space station. The specific spacecraft currently at the station is on its third mission in space.

SpaceX’s future resupply missions will use the upgraded Dragon 2 spaceship, which comes in crew and cargo variants.

At the Baikonur Cosmodrome in Kazakhstan, the members of the next space station crew are readying for launch April 9 to begin a six-month expedition in orbit.

Because of concerns about the coronavirus pandemic, the families of the Soyuz crew members and media representatives will not be allowed to attend the launch at Baikonur.

The Soyuz MS-16 crew arrived at Baikonur aboard a Russian space agency jet March 24 after leaving their training site in Star City, Russia, near Moscow.

The space station will be restored to its normal crew size of six for nearly eight days before Skripochka’s crew floats into a different Soyuz spaceship April 16 for return to Earth.

NASA says station operations have not been impacted by the COVID-19 pandemic, which has restricted travel and triggered stay-at-home orders in many states across the country, limiting in-person work to essential businesses.

The space station flight control team is currently staffed at normal levels at the Johnson Space Center in Houston, according to NASA.

Skripochka, Meir and Morgan are scheduled to undock from the space station in their Soyuz MS-15 spaceship at 9:53 p.m. EDT on April 16 (0153 GMT on April 17). A few hours later, the Soyuz will fire braking rockets to fall back into the atmosphere, targeting a landing on the steppe of Kazakhstan at 1:17 a.m. EDT (0517 GMT; 11:17 a.m. local time in Kazakhstan).

That will leave Cassidy in command of the space station’s Expedition 63 crew, which will have the station to themselves until the planned arrival of NASA astronauts Doug Hurley and Bob Behnken on the first piloted test flight of SpaceX’s Crew Dragon capsule.

Hurley and Behnken are scheduled for launch in mid-to-late May from the Kennedy Space Center atop a SpaceX Falcon 9 rocket. The duration of their stay on the space station was originally expected to last just a week or two, but could be extended to several months to provide the station with extra manpower during a time when the orbiting lab’s U.S. segment would otherwise be staffed with just a single NASA astronaut.

Cassidy is flying in the final Soyuz seat NASA has purchased from Roscosmos, the Russian space agency. NASA is expected to soon announce the purchase of at least one additional Soyuz seat on an October launch from Baikonur, easing pressure on NASA’s commercial crew providers — SpaceX and Boeing — as they prepare their U.S.-made human-rated crew capsules for launch.

The busy month of comings and goings at the International Space Station will wrap up in late April with the arrival of a Russian Progress refueling and resupply freighter.

The Progress spaceship is set to launch atop a Soyuz booster April 25 and will dock with the space station around three-and-a-half hours later with a load of propellant, water and cargo. 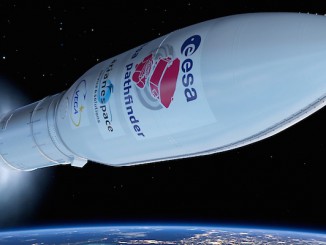 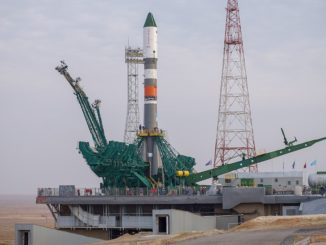 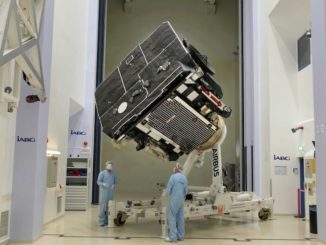