The Bartolomeo platform will be robotically installed to the outside of the space station’s Columbus module later this month, and astronauts will hook up wiring on a spacewalk to ready the structure to host science payloads.

Developed by Airbus Defense and Space in Germany in partnership with the European Space Agency, the Bartolomeo platform is designed to offer commercial companies a streamlined way of getting their experiments into orbit. Rather than launching their experiments on a standalone satellite, or spending money on complicated power and data handling systems, a customer can develop an experiment and plug it into Bartolomeo for months or years of operations.

Bartolomeo will be attached to the leading edge of ESA’s Columbus module. The platform has 12 mounting points, each providing payloads with electricity and data connections to power the experiments and ensure scientists promptly receive data from their research investigations.

“Simply put, Bartolomeo is a science and payload hosting facility to be mounted on on the outside of the International Space Station to provide additional payload locations for the external science and research community,” said Kris Kuehnel, director of Airbus DS Space Systems in Houston. “Bartolomeo was commercially developed by Airbus in a cooperative agreement with the European Space Agency.

Named for the younger brother of explorer Christopher Columbus, Bartolomeo is similar to the unpressurized outdoor platform affixed to the Japanese Kibo lab module on the opposite side of the space station. But Kibo’s exposed facility was funded by the Japan Aerospace Exploration Agency and primarily hosts government-owned experiments from the United States and Japan.

Bartolomeo is European-owned, and Airbus is emphasizing its usefulness for commercial companies, academic institutions and other lower-budget customers.

“It started a couple of years ago when the European Space Agency asked for ideas how to promote science and increased commercial activities on-board the ISS, and our answer is the Bartolomeo platform,” said Andreas Schütte, Bartolomeo’s project manager at Airbus. “With Bartolomeo, we can offer 12 payload slots available for any organization, be it a research organization, university, or a commercial entity. We sell to anyone to enable science, in-orbit demonstrations, you name it.”

Airbus spent about 40 million euros ($45 million) to develop the Bartolomeo platform, according to DLR, the German space agency. DLR says accommodations on-board Bartolomeo will be priced from 300,000 to 3.5 million euros ($340,000 to $4 million) per year.

“Radiation biologists, solar physicists and astrophysicists, Earth observers and atmospheric and climate researchers will all benefit from the new platform,” said Julianna Schmitz, who is responsible for ISS commercialization at DLR. “Bartolomeo is particularly suitable for technology testing and validation. There are unique possibilities here that cannot be achieved in any laboratory on Earth because optical sensors, materials, robotic components and antennas can be tested directly in the space environment.”

Bartolomeo is loaded inside the unpressurized trunk of a SpaceX Dragon cargo capsule for liftoff from Cape Canaveral on top of a Falcon 9 rocket Friday at 11:50 p.m. EST (0450 GMT Saturday).

The Dragon cargo mission — SpaceX’s 20th operationally resupply launch to the space station — is set to deliver 4,358 pounds (1,977 kilograms) of supplies, experiments and other equipment to the orbiting research outpost. Bartolomeo makes up about one-quarter of the cargo mass on the Dragon capsule.

The mission will mark the final flight by SpaceX’s first-generation Dragon spacecraft, which first flew in space in 2010 on a test flight before reaching the space station on a subsequent mission in 2012.

With a successful launch Friday night and a rendezvous with the space station early Monday, SpaceX will have delivered more than 94,000 pounds (around 43 metric tons) of cargo to the research complex on 20 missions, including a test flight in 2012. One of the operational resupply flights suffered a launch failure in 2015.

The 20 Dragon missions have returned about 74,000 pounds (33 metric tons) of cargo from the space station back to Earth.

The Dragon commercial cargo missions were conducted under a $3.04 billion resupply services contract with NASA, which also helped pay for development of the Dragon spacecraft and Falcon 9 launcher through an earlier $396 million funding agreement.

SpaceX plans to begin resupply missions using its next-generation Dragon 2 spacecraft in October. The Dragon 2 was developed to ferry astronauts to and from the space station, but the new capsule comes in dedicated crew and cargo configurations.

Along with Bartolomeo, the Dragon cargo mission set for launch Friday night will deliver about a ton of scientific experiments, including biological research investigations studying microgravity’s impact on stem cells, intestinal diseases and chemical reactions.

Another experiment heading to the space station comes from Delta Faucet, which will study water droplet formation in microgravity in hopes of developing better-performing shower heads while reducing water usage.

When the Dragon spacecraft reaches a position roughly 30 feet (10 meters) below the space station, astronauts Jessica Meir and Drew Morgan will use the station’s Canadian-built robotic arm to grapple the SpaceX cargo capsule.

The robot arm will maneuver the ship to a berthing port on the station’s Harmony module, and astronauts will begin unpacking the contents of the capsule’s pressurized compartment.

Meanwhile, the robotics systems outside the station will reach into the Dragon’s trunk and grapple the Bartolomeo platform.

“We are eagerly awaiting the launch, but this is only one milestone on the way for Bartolomeo,” Schütte said. “The most interesting part is eventually the robotic installation of Bartolomeo.”

The robotic arm will attach the Bartolomeo platform to trunnion bolts on the Columbus module, which connected the lab to restraints inside the space shuttle payload for its journey to the space station in 2008. The platform is folded up to fit inside the SpaceX Dragon spacecraft, and it will open up to its fully-deployed configuration as it’s connected to the Columbus module.

“We needed to fit … into the SpaceX trunk,” Schütte said.  “We also had to fold the outrigger boom to attach between the trunnions, so that required some really complex mechanisms, and requires also a lot of robotics activities when Bartolomeo is going to be installed.”

Astronauts will mate power and data connectors on a spacewalk to finish readying the Bartolomeo platform for operations.

Data from experiments attached to Bartolomeo will be routed to the ground through the space station’s telemetry system, then go into cloud storage, where scientists can access the information via a smartphone. Payload owners can also send commands to their experiments through a smartphone, Schütte said.

“No astronauts will need to be deployed to retrofit Bartolomeo with scientific payloads,” Schmitz said. “Thanks to the payloads’ standardized dimensions and interfaces, installation is much easier and can be carried out purely robotically via remote control from Earth.”

A German-made laser communications terminal will be added to Bartolomeo in 2021, allowing faster data links between experiments and their operators on the ground.

“The first experiment to find its science spot (on Bartolomeo) will be the Multi-Needle Langmuir Probe, a payload made in Norway to control the electric potential of a spacecraft or satellite platform with an electron emitter,” ESA said.

Another experiment from CNES, the French space agency, could also be mounted to Bartolomeo to investigate the aging of materials during spaceflight.

Airbus is also partnering with the United Nations Office for Outer Space Affairs to solicit ideas for Bartolomeo payloads from around the world. Developing countries are particularly encouraged to participate, according to the UN. 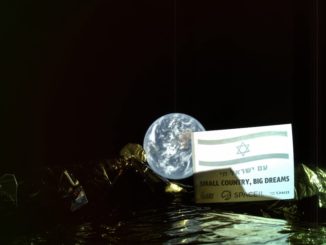 Beresheet lander on course for the moon 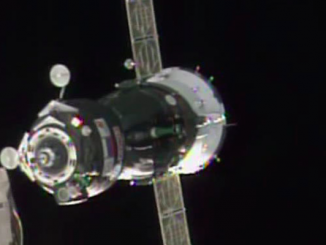 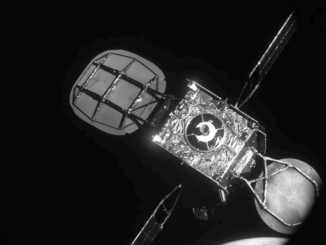