Mitsubishi Heavy Industries, the prime contractor for Japan’s H-2B rocket, said Friday that engineers concluded a fire on the launch pad during a countdown earlier this month was most likely sparked by static electricity and stimulated by oxygen.

The H-2B rocket launch from the Tanegashima Space Center has been rescheduled for Tuesday at 12:05 p.m. EDT (1605 GMT), MHI said Saturday. Launch time is set for 1:05 a.m. Wednesday in Japan.

The 186-foot-tall (56.6-meter) rocket will carry Japan’s eighth HTV cargo ship into orbit on a mission to resupply the International Space Station.

MHI announced Friday the results of an investigation into a fire on the launch pad that occurred during a previous H-2B countdown earlier this month. The launch provider initially rescheduled the launch for Monday (U.S. time), but said Saturday that the liftoff would be delayed another day “due to the results of the latest orbit based analysis of the International Space Station and Soyuz spacecraft.”

A Russian Soyuz crew ferry ship is also set for launch next week. Liftoff from Kazakhstan with a three-person crew is set for Wednesday, with docking scheduled less than six hours later.

The fire on the Tanegashima launch pad erupted on the H-2B’s mobile launch platform around three-and-a-half hours before the rocket’s scheduled liftoff Sept. 10, when the rocket was fully fueled with cryogenic liquid hydrogen and liquid oxygen propellants. Officials from MHI called off the launch and returned the rocket and its mobile platform to the Vehicle Assembly Building at the Tanegashima Space Center, located off the southernmost of Japan’s main islands.

Low winds at Tanegashima during the Sept. 10 countdown allowed oxygen vapors to build up at the launch pad in higher concentrations than previous countdowns, officials said. Super-cold oxygen is used as an oxidizer in both stages of the H-2B rocket, and also flows through the first stage’s twin LE-7A main engines during pre-launch “chilldown” conditioning procedures.

“As a result of the investigation, it was confirmed that there was a high possibility that the fire spread due to the static electricity generated by the oxygen dripping from the engine exhaust port during the propellant filling operation, which continued to blow on the heat-resistant material in the exit hole at the movable launch pad,” MHI said in a statement.

“We have taken corrective measures and have confirmed normal functioning of the rocket and facility,” MHI said.

MHI’s statement did not identify any potential sources of the static electricity, or detail the corrective actions.

The H-2B rocket and its HTV cargo ship payload will return Launch Pad No. 2 at Tanegashima ahead of Tuesday’s countdown.

The eighth HTV spacecraft is packed with some 8,326 pounds (3,777 kilograms) of equipment, experiments and crew provisions for the space station, including six new lithium-ion batteries to update the orbiting research lab’s power system.

Assuming the HTV mission takes off Tuesday, the automated cargo freighter is scheduled to arrive at the space station Saturday, Sept. 28.

Astronauts will conduct up to five spacewalks in October to swap old nickel-hydrogen batteries with the new lithium-ion units on the space station’s far port-side P6 truss segment. The batteries are charged by the space station’s solar arrays to power the complex during the nighttime part of each orbit.

The two previous HTV missions delivered 12 new batteries to the station, and another HTV flight next year will carry a final set of six lithium-ion batteries.

The launch and rendezvous of Japan’s HTV cargo ship next week will bookend the liftoff and docking Wednesday of a three-person crew at the space station.

The Russian Soyuz MS-15 spacecraft is set for launch from the Baikonur Cosmodrome in Kazakhstan at 9:57 a.m. EDT (1357 GMT) Wednesday, followed by docking at the station less than six hours later.

Russian cosmonaut Alexey Ovchinin, NASA astronaut Nick Hague and Almansoori will return to Earth on Oct. 3 on the Soyuz MS-12 spacecraft. Ovchinin and Hague will wrap up a 203-day mission, while Almansoori will come back to Earth after eight days in orbit. 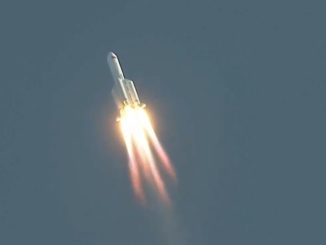 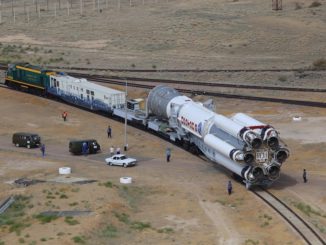 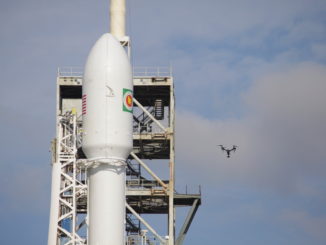