A U.S.-built commercial communications craft owned by Intelsat and a new node for Europe’s laser data relay satellite network rocketed into orbit Tuesday from Kourou, French Guiana, on top of an Ariane 5 rocket.

The 179-foot-tall (54.8-meter) rocket climbed into a sunny late afternoon sky — rare conditions for a launch at the jungle spaceport in French Guiana — with 2.9 million pounds of thrust from its core engine and solid-fueled boosters.

Heading toward the east over the Atlantic Ocean, the Ariane 5 bolted past the speed of sound and jettisoned the two solid rocket boosters less than two-and-a-half minutes into the mission, once the motors consumed all their pre-packed propellant.

The Ariane 5 next released its Swiss-made payload fairing, and the rocket’s Vulcain 2 main engine fired for nearly nine minutes before the core stage shut down and separated.

The upgrade allows for a longer burn of the HM7B engine, and increases the Ariane 5’s lift capability to geostationary transfer orbit — the destination for most Ariane 5 missions — by around 198 pounds (90 kilograms), according to ArianeGroup.

“This new payload capacity for Ariane 5 is one more step in our process of continuously improving the performance and thus the competitiveness of Ariane 5,” said André-Hubert Roussel, CEO of ArianeGroup. “ArianeGroup and the Ariane program partners are working tirelessly on new innovations to optimize our products for the market, and all the efforts made on Ariane 5 will be of benefit for Ariane 6.”

Europe’s Ariane 6 rocket is scheduled for its first launch in 2020, followed by a transition period as the new rocket ramps up to full production. The final Ariane 5 launch is scheduled in 2023.

ArianeGroup said engineers will continue improving the Ariane 5’s performance. The next step will be merging the Ariane 5’s vehicle equipment bay, which contains the rocket’s guidance system and avionics, with the payload adapter structure to further increase the launcher’s payload capacity.

The upper stage worked as designed Tuesday and injected the Intelsat 39 and EDRS C spacecraft into an elliptical geostationary transfer orbit stretching from a low point of roughly 155 miles (250 kilometers) to a high point of more than 22,000 miles (nearly 36,000 kilometers), with an inclination tilted 4.5 degrees to the equator.

The 14,550-pound (6.6-metric ton) Intelsat 39 communications satellite was the first payload to deploy from the Ariane 5’s upper stage. Built by Maxar in Palo Alto, California, Intelsat 39 rode in the upper position inside the Ariane 5’s dual-payload berth.

Arianespace, the French company which operates and sells Ariane 5 flights, declared the mission a success.

Arianespace delayed the Ariane 5 mission from July 24 to clear the launcher of any faults related to the failure of a European Vega rocket July 10. The Vega rocket is a light-class launch vehicle — much smaller than the Ariane 5 — but Avio, the Vega’s prime contractor in Italy, also supplies components for the Ariane 5’s two solid rocket boosters.

After separating from the launcher, the Intelsat 39 and EDRS C satellites will use their own engines to maneuver from the Ariane 5’s elliptical drop-off orbit into a circular geostationary orbit, where their movement around Earth will match the rate of the planet’s rotation.

Intelsat 39 will park itself over the equator at 62 degrees east longitude to begin a 15-year mission providing C-band and Ku-band services across Asia, Africa, the Middle East and Europe.

“We can use this satellite for video distribution services and a lot of network services for enterprises, governments, Internet service providers,” said Ken Lee, Intelsat’s vice president of space systems.

Intelsat 39 will replace the aging Intelsat 902 satellite at the 62 degrees east orbital location. Intelsat 902 launched on top of an Ariane 4 rocket from French Guiana in 2001, and is nearing the end of its life, Lee said.

Officials said Intelsat 39 will provide video and broadband services from its perch high above the equator. The new Intelsat spacecraft will also provide connectivity for airplanes and ships traveling in the Indian Ocean region.

“One of the key customers that we have on-board is the Myanmar Ministry of Transport and Communications, as well as some of our (U.S.) government users as well, because it does have multiple steerable beams that can be directed anywhere,” Lee said in a pre-launch interview with Spaceflight Now. “That’s pretty powerful, so it’s a good fit for government use.”

Intelsat announced last year the that Myanmar’s Ministry of Transport and Communications signed a multi-year, multi-transponder agreement to use Intelsat 39 to provide broadband Internet services to government agencies, businesses and communities throughout the country.

Users aboard airplanes and ships in the Indian Ocean region could also use connectivity provided by Intelsat 39, which joins Intelsat’s fleet of more than 50 geostationary communications satellites.

Intelsat 39 will use a conventional liquid-fueled main engine for most of the boost it needs to reach geostationary orbit. An electric propulsion package will complete the orbit-raising phase of the mission before Intelsat 39 enters commercial service in October, Lee said.

“We’re expecting to have a pretty long fuel life, beyond what was on Intelsat 902,” Lee said. “So we’re looking forward to this spacecraft. This is a pretty large spacecraft with high power.”

Built by OHB in Bremen, Germany, the EDRS C spacecraft launched Tuesday will be the second relay station in geostationary orbit for the European Data Relay System. EDRS A is a hosted laser relay package on the commercial Eutelsat 9B communications satellite, which launched in 2016.

The EDRS network relays data and imagery from satellites in lower orbits, including the European Sentinel Earth observation fleet.

The EDRS system is similar to NASA’s Tracking and Data Relay Satellite, or TDRS, network, which began operations in the 1980s to close communications coverage gaps for spacecraft passing between ground stations. But unlike the U.S. system, the European data relay satellites carry laser communications links to enable super-fast transfers of information and imagery.

The EDRS network can transmit up to 40 terabytes of data per day, at a rate of 1.8 gigabits per second.

The European Commission’s Sentinel 1A, 1B, 2A and 2B Earth-imaging satellites are the anchor users of the European data relay system, which was developed in a public-private partnership between the European Space Agency and Airbus.

A new European laser terminal will launch to the International Space Station on a SpaceX resupply ship next year to be attached outside the station’s Columbus module. The arrival of the laser system will enable the EDRS network to connect with the space station, opening the door for faster data links for experiments hosted on the orbiting research complex.

Airbus owns and operates the EDRS nodes in orbit, and sells access to the network — which it calls the “SpaceDataHighway” — on the commercial market. The EDRS control center is located in Ottobrunn, Germany.

“ESA is investing a chunk of money, and Airbus is putting some money on the table as well,” said Michael Witting, ESA’s EDRS project manager. “The logic behind it is ESA has covered most of the technical risks in the development phase, and Airbus has invested money, and they, in a sense, cover the market risk.”

Airbus’s four high-resolution Pléiades Neo optical reconnaissance satellites — the first two of which could launch in 2020 — will also link up with the EDRS network to transmit Earth imagery to the ground at high data rates.

The Eutelsat 9B satellite hosting the EDRS A payload is parked at 9 degrees east longitude in geostationary orbit, and EDRS C is heading for a position at 31 degrees east.

The EDRS C satellite should reach geostationary orbit Aug. 14 after five main engine burns, Witting said. After testing at a different geostationary slot, EDRS C will move to its final operating position in late September or early October, when ground teams will integrate the new satellite into the data relay network.

ESA and Airbus have spent 590 millions euros, or about $660 million, on the first two EDRS nodes and their dedicated ground segment, Witting said.

Airbus announced earlier this year a cooperation agreement the SKY Perfect JSAT, a Japanese communications satellite operator, to co-finance design and development studies for a third EDRS node over the Asia-Pacific for launch before 2025.

After conducting three launches in less than seven weeks this summer, Arianespace is entering a quiet period of launch activity in French Guiana.

A Vega rocket was supposed to take off in September on a rideshare mission carrying 42 small satellites into polar orbit, but the schedule for that launch is in doubt after the failure of the previous Vega mission in July. Officials from Arianespace and Avio say they aim to resume Vega launches later this year.

The next Ariane 5 rocket launch is scheduled for November. Payloads for that flight have not been announced.

A Russian-made Soyuz rocket is also expected to lift off from French Guiana in November with an Italian radar surveillance satellite and the European Space Agency’s CHEOPS astronomy mission, designed to measure the sizes of planets around other stars. 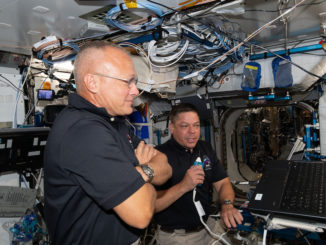 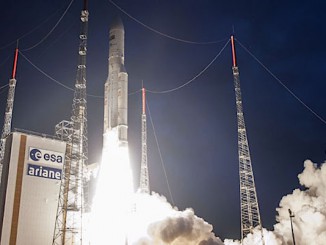 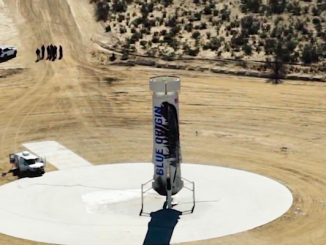