NASA’s independent review team that investigated the destruction of a SpaceX Falcon 9 rocket and Dragon supply ship shortly after liftoff in June 2015 concluded a design error led to the loss of more than two tons of provisions and equipment heading for the International Space Station.

Engineers from NASA’s Launch Services Program, a group based at the Kennedy Space Center in Florida, reviewed telemetry from the doomed flight and compiled an independent report on the launch failure. Under regulations set by the Federal Aviation Administration, the government agency which oversees commercial rocket launches by U.S. companies, SpaceX itself was in charge of the primary investigation team.

The NASA review board largely agreed with SpaceX on the direct cause of the launch failure — the rupture of the Falcon 9’s upper stage liquid oxygen tank triggered by a pressurized helium vessel that broke free in flight, according to a public summary of their report released Monday.

But the agency’s engineers faulted SpaceX for using a substandard steel component in a strut that was supposed to hold the helium reservoir inside the liquid oxygen tank, where propellant was chilled to near minus 300 degrees Fahrenheit (minus 184 degrees Celsius).

The Falcon 9 rocket launched from Cape Canaveral on June 28, 2015, with SpaceX’s seventh Dragon cargo mission to the space station. The launcher’s first stage flew as planned until 2 minutes, 19 seconds, after liftoff, when a puff of vapor suddenly appeared near the top of the Falcon 9.

Within 800 to 900 milliseconds from the first indication of a problem, the Falcon 9 began disintegrating at an altitude of nearly 150,000 feet — about 44 kilometers — over the Atlantic Ocean.

“In other words, the vehicle went from flying fine to conflagration in less than a second, or ‘within a blink of an eye,'” NASA officials wrote in a summary of their inquiry published Monday.

Within a few weeks of the launch failure, SpaceX officials publicly identified what the company’s engineers determined was the most probable cause of the accident.

SpaceX’s engineers concluded a material defect in an axial support strut holding a helium-filled Composite Overwrapped Pressure Vessel, or COPV, caused the bracket to fracture under the structural loads of launch.

The helium is used to pressurized the upper stage’s propulsion system.

“The strut that we believe failed was designed in material certified to handle 10,000 pounds of force, but actually failed at 2,000 pounds force, which is a five-fold difference,” SpaceX chief executive Elon Musk told reporters in a briefing around three weeks after the launch accident.

According to NASA’s report summary, the agency’s independent review team and the SpaceX-led investigation agreed it was credible that a threaded cast stainless steel eye bolt, or rod end, on the suspect strut broke under the stresses of launch, allowing the COPV to break free of its mounts. The buoyancy of the COPV, loaded with highly-pressurized helium, caused it to accelerate upward, where it struck the wall of the upper stage’s liquid oxygen tank with great force, NASA officials wrote in a summary of the independent inquiry’s conclusions.

Musk said in 2015 that the strut came from a third-party vendor, which SpaceX has not publicly identified.

But NASA’s review of the launch failure touched on a broader range of potential “initiating causes” of the accident than outlined in SpaceX’s investigation report.

Besides the material defect explanation of the strut failure favored by SpaceX, NASA engineers wrote that manufacturing damage of the rod end, the improper installation of the rod end strut, collateral damage to the rod end, or the breakage of some other part of the COPV’s axial strut were equally credible initiating causes.

NASA also knocked SpaceX for not testing the rod end, which was not built to aerospace specifications, under the conditions the part would encounter during a launch.

“Lastly, the key technical finding by the IRT with regard to this failure was that it was due to a design error: SpaceX chose to use an industrial grade (as opposed to aerospace grade) 17-4 PH SS (precipitation-hardening stainless steel) cast part (the “rod end”) in a critical load path under cryogenic conditions and strenuous flight environments,” NASA’s report said.

SpaceX stopped using the type of strut that failed in 2015 when flights resumed later that year with an upgraded “full thrust” version of the Falcon 9, and NASA said all of its technical findings were addressed by SpaceX in time for the next Falcon 9 launch with one of the space agency’s missions — the Jason 3 oceanography satellite — in January 2016.

Another Falcon 9 rocket mishap in September 2016, when a booster exploded during a launch pad test and destroyed an Israeli-owned commercial telecom satellite, was also blamed on a problem with the upper stage’s helium pressurant tanks.

SpaceX engineers believe that failure started when liquid oxygen propellant froze in a buckle or void in a liner on one of the COPVs. The solid oxygen ignited from friction or breaking fibers on the outside of the helium tank, causing the Falcon 9’s upper stage to burst in a ball of flame.

SpaceX modified its fueling and helium loading procedures after the September 2016 accident to prevent solid oxygen from forming, and a new COPV design incorporates changes the company says eliminates the buckles altogether. 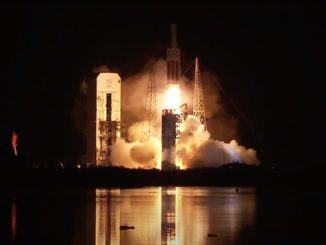 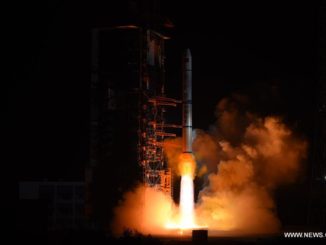 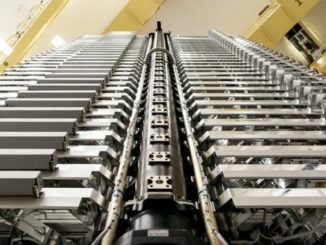