CAPE CANAVERAL — Officials have accepted a Friday launch date for a commercial cargo ship to the International Space Station after Range availability scuttled notions of moving up the Atlas 5 flight by a day.

A Thursday launch had been considered, but the Eastern Range was unavailable that day due to unrelated SpaceX mission testing on the Space Coast.

Liftoff on Friday will be possible during any of five specific opportunities in a 30-minute launch window, with the rocket’s in-flight steering capabilities employed to guide Cygnus into the station’s orbital plane:

(* exact times down to the second will be determined based on final radar tracking of the station’s orbit on launch day.)

Cygnus will take a three-and-a-half-day trek to the orbiting laboratory for rendezvous on March 28. Grapple of the vessel by the station’s robotic arm is planned for 6:40 a.m. EDT (1040 GMT).

“Favorable weather over the spaceport through mid-week with high pressure dominating. The next cold (cool) front advances into North Florida overnight Wednesday (Thursday morning) and slowly pushes through the spaceport through the day. Easterly flow develops as the front pushes through with showers associated with the front. High pressure builds in on Friday with breezy east winds,” Air Force meteorologists said this morning.

“On launch day, high pressure migrates east as the next system advances into Central and East Texas. Over Central Florida, with the exception of breezy winds, favorable weather is expected with an isolated shower threat. On-shore east winds remain breezy with gusts in the mid-20s during the count and low 20s during the window.

The launch time specifics include scattered clouds, good visibility, winds from the east at 18 to 22 knots, a relative humidity of 70 percent and a temperature of 72 degrees F.

“In the event of a 24-hour delay, the next cold front pushes into the Central Gulf of Mexico with pre-frontal showers in the Florida panhandle during the afternoon. There is an isolated shower threat during the count as the system pushes east. Winds remain breezy Saturday morning and begin trending down during the afternoon with gusts in the upper teens to 20 knots during the window. The primary concern for launch is cumulus clouds,” forecasters say. 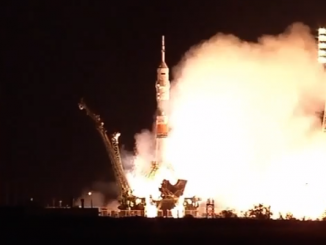 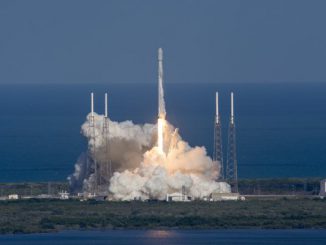