CAPE CANAVERAL — Like reaching back in time to examine the conditions that existed in the ancient solar system, NASA has launched a robotic probe to visit Asteroid Bennu and return an unspoiled sample of the primitive body that may hold the seeds of life.

“We’re going to an asteroid that represents the first building blocks of the planets in our solar system,” said Dante Lauretta, OSIRIS-REx principal investigator with the University of Arizona.

“The mission is driven by the return of pristine organic molecules from the early solar system. I’m really hopeful that we will get some unique material that isn’t in our meteorite collections because its probably friable and not easily surviving atmospheric passage, and that’s the reason we are going to protect it in our Sample Return Capsule.”

Known as the Origins, Spectral Interpretation, Resource Identification, Security, Regolith Explorer, or OSIRIS-REx for short, the $800 million mission embarked on its 7-year, round trip journey to Bennu and back at 7:05 p.m. EDT (2305 GMT).

“Liftoff of OSIRIS-Rex, its seven-year mission to boldly go to the Asteroid Bennu and back,” NASA launch commentator Mike Curie called in tribute to the 50th anniversary of Star Trek.

The craft departed atop a United Launch Alliance Atlas 5 rocket, blasting off from Cape Canaveral at the opening minute of the planetary-alignment window on the first try after a smooth countdown.

“This was an excellent launch,” says Tim Dunn, the NASA launch director. “Not a single anomaly was worked during the countdown, almost unheard of.”

The strange-looking launcher, with a single solid rocket booster mounted to its side to augment the first stage, powered away on 1.2 million pounds of thrust, coming off the pad “beautifully,” Dunn said, and headed eastward across the Atlantic Ocean.

Staging four minutes into flight saw the Centaur upper stage ignite for an eight-minute burn to boost the spacecraft into an initial Earth parking orbit. After coasting over Africa, the rocket fired for seven more minutes to escape Earth on an interplanetary trajectory before separating to fly solo an hour into flight.

It marked the 136th successful launch in a row for the Atlas program spanning 23 years, the 65th for the Atlas 5 over the span of 14 years and extended United Launch Alliance’s mission record to 111 in nearly 10 years.

OSIRIS-REx, built by Lockheed Martin in Denver, quickly deployed its two power-producing solar arrays and phoned home via the Canberra tracking station that it was in excellent health.

“We started the journey with a phenomenal launch on the Atlas 5. It delivered us right where we needed to be.”

The craft measures 10 feet tall and 20 feet wide and weighed 4,650 pounds at launch. It is equipped with 28 thrusters of various sizes for maneuvers and 2,700 pounds of hydrazine fuel.

OSIRIS-REx will swing by the Earth on Sept. 22, 2017, receiving a gravity-assisted slingshot to bend the flight path to intercept the destination — Asteroid Bennu — in August 2018 for a three-year stay.

“We can hover like a hummingbird, we can orbit around the thing, we can go in for the sample acquisition maneuver and we use very tiny amount of our rocket fuel,” said Lauretta.

“We are going to do hyperbolic flybys, so we that we can measure the mass as we look at the deflection, we are going to be able to stationkeep over certain areas of the asteroid as we do our survey and we’ll go into orbit around the asteroid. Since the gravity field is so low — the mass of the asteroid is small — it doesn’t require a lot of thrusting with our rocket engines to make those changes.”

From the a science mapping orbit, OSIRIS-REx will fly 5,000 feet, then a mere 3,300 feet above the asteroid’s surface and use its instruments to interrogate Bennu with an unprecedented level of detail.

“The size, orbit and the primitive, carbon-rich composition of Bennu make it a fascinating and accessible asteroid, and that is why it was ultimately chosen as the target destination for the OSIRIS-REx mission,” said Christina Richey, OSIRIS-REx deputy program scientist at NASA Headquarters.

“With a scientifically-exciting asteroid like Bennu…(OSIRIS-REx) will teaching us the fundaments about the formation of planetary bodies, our own solar system and even the ingredients to the origin of life.”

Bennu, discovered just 17 years ago, has an estimated mass of 86 million tons, is roughly spherical, bulges at its equator to 1,614 feet in diameter, has a rotation period 4.3 hours and is covered by very dark gravel, soil and dust. It orbits the Sun every 437 days and grazes past Earth at lunar distance every 6 years.

Part of the mission also aims to determine Bennu’s precise trajectory, which current estimates say there is a 1 in 2,700 chance it could collide with Earth late in the 22nd century — between 2175 and 2199.

“We are going to contribute to the science by measuring a phenomena called the Yarkovsky Effect, which is a fascinating interplay between sunlight and these small asteroids,” Lauretta said.

“The asteroids get their energy from the Sun, a lot of that energy, especially on a dark asteroid like Bennu, is absorbed, causing the asteroid’s surface to heat up. It has to release that energy back out into space, and when that happens it acts likes like a thruster and changes the trajectory of the asteroid.

“So if you want to be able to predict where an object like Bennu is going to be in the future, you have you to account for this phenomenon, and we’re going to provide the best-ever scientific investigation of this fascinating concept.”

OSIRIS-REx carries a camera suite that will document the asteroid, search for moons, image in color and features an 8-inch telescope, a laser altimeter that will acquire 6 billion measurements to map in 3D the shape and terrain of Bennu at centimeter-scale, a thermal emission spectrometer for mineral and temperature data, a visible and infrared spectrometer to identify organic material and a student-made X-ray imaging spectrometer that seeks to determine what elements are present on the surface.

“In the visible and infrared light, minerals have unique signatures, or colors, much like fingerprints. Scientists use these fingerprints to identify molecules like organics,” said Richey.

“For primitive, carbon-rich asteroids like Bennu, materials are preserved from over 4.5 billion years ago. We are talking about the start of the formation of our solar system. And these primitive materialis could contain organic molecules that may be the precursors life here on Earth or elsewhere within our solar system.”

After much practice, in July 2020, the small probe will use its 11-foot-long, pogo-stick arm to grab a specimen of the celestial object with a 0.22 mph touch-and-go maneuver.

“Once we leave the orbit around it, there’s two additional maneuvers we do that both match the asteroid’s spin rate and then put us on a trajectory were we go down towards the asteroid,” said Kuhns.

With the 12-inch-diameter disk-shaped sampling head in contact with the asteroid, penetrating the surface up to a foot, nitrogen gas will be fired to agitate the soil, creating a cyclonic vacuum to capture a bit of Bennu.

“We want this to be a safe, smooth, slow high-five of that surface,” said Richey.

But Lauretta cautioned there is inherent risk.

“The nature of an asteroid’s surface, a rubble-pile asteroid in microgravity, is a new realm of physics, and we’re not exactly sure what the surface is going to be like,” he said.

“Touching the asteroid is a great science experiment, and we’re going to learn an enormous about about asteroid surface properties…but we are explorers, and this is the unknown.”

The spacecraft will try to obtain at least 2.1 ounces and possibly up to 4.4 pounds of regolith. By performing a spin maneuver, controllers will determine if enough sample material was collected. Nitrogen is available for two more tries, if needed.

Once the scientific treasure is stowed in the protective return capsule, OSIRIS-REx will back away from the asteroid to a safe distance and wait for the Bennu departure window to open. That occurs in March 2021, allowing the probe to fire thrusters and head for home, a journey that will take over two years.

Approaching Earth and just four hours from landing, the spacecraft spring-ejects the container holding the sample, protected by a heat shield, to hit the atmosphere at 27,700 mph and experience 32 Gs before making a parachute-assisted touchdown on Sept. 24, 2023 at 9 a.m. local time in the Utah Test and Training Range, west of Salt Lake City.

The mission’s total distance to be traveled: 4.4 billion miles.

The Johnson Space Center in Houston is responsible for curation of the Bennu samples, which should be the largest amount of extra-terrestrial material returned to Earth since the Apollo moonrocks.

“We bring the sample back and can subject it to a battery of examinations and tests that we can’t do anywhere else but on Earth,” added Jeff Grossman, OSIRIS-REx program scientist at NASA Headquarters.

“Bennu is carbon-rich near-Earth asteroid that holds the record of the formation of the solar system and can answer some of the fundamental questions about our origins,” said Gordon Johnston, OSIRIS-REx program executive at NASA Headquarters in Washington.

About 20 percent of the returned asteroid specimen will be studied by the OSIREX-REx team, while four percent is given to Canada for providing the mission’s laser altimeter. A half-percent goes to Japan under cooperative agreement with that country’s Hayabusa asteroid missions.

And three-quarters of the sample will be set aside for future study by instruments not yet invented.

Meanwhile, the OSIRIS-REx mothership, minus the 100-pound sample landing pod, will remain in space and available for a potential trek to another body to study with its scientific instruments. Twenty minutes after releasing the Sample Return Capsule, the spacecraft will fire thrusters to divert its path from following the canister into the atmosphere.

“As we are coming in for Earth return, we have a very precise corridor so that we line up the Sample Return Capsule with the right angle of attack to make sure it lands safely in the Utah Test Range. That really drives the trajectory of the spacecraft,” Lauretta said.

“That said, right after we separate, we will do a deflection maneuver and the spacecraft will be put into a parking orbit around the Sun. Currently, the team has no plans for an extended mission. However, we expect that it will be a healthy spacecraft, fully functional, and it’ll really be up to the agency to decide what kinds of extended missions they might be interested in for that vehicle.”

OSIRIS-REx is the third mission launched under NASA’s New Frontiers program, following New Horizons that departed in 2006, fly by Pluto in 2015 and is headed into the Kuiper Belt, and Juno that began its journey in 2011 and entered orbit around Jupiter on July 4.

“It really is a great adventure, going out into the unknown,” said Lauretta. “We are bringing back scientific treasure and, for me, looking forward to the day in 2023 when we open up that Sample Return Capsule is what has driven me for the past 12 years and what keeps us going for the next 7.” 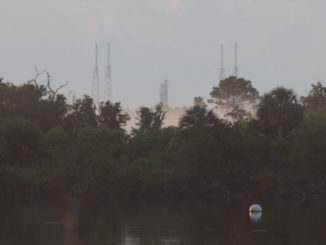 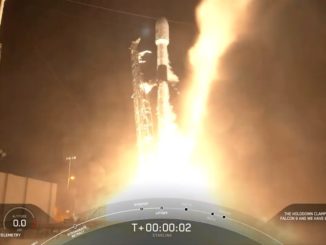 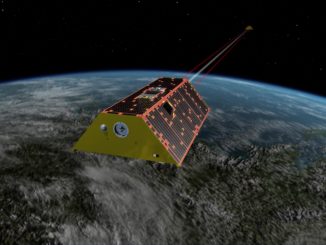