CAPE CANAVERAL — After tropical weather passes through Florida to start the week, meteorologists say there is a 40 percent chance of acceptable conditions for the United Launch Alliance Delta 4-Heavy rocket to fly Thursday from Cape Canaveral with a reconnaissance satellite payload for the U.S. government.

Tropical Storm Colin, which formed Sunday over the southern Gulf of Mexico, will make its way northeastward today, bringing its center ashore in the Big Bend area of Florida. Along the Space Coast, heavy rains are expected through Tuesday and a tropical storm warning is in effect for the beaches.

The Delta 4-Heavy rocket and its classified National Reconnaissance Office payload are safe and secure within the protective gantry at Complex 37.

“Weather will improve Wednesday, but Thursday a trough to the south will migrate north over the Space Coast causing a risk of showers and thunderstorms beginning as early as noon and continuing into the afternoon,” Air Force launch meteorologists reported today.

“Anvils from inland storms will also migrate toward the Space Coast. The primary concerns for launch are anvil clouds, cumulus clouds and lightning.”

Winds will be easterly at 12 gusting to 18 knots and temperatures will be in the mid-80s F.

If the launch is scrubbed, another flight opportunity will be available Saturday. The outlook improves to 80 percent “go” odds then.

“In the event of a 48-hour delay, weather improves significantly as the boundary moves south and dryer air aloft moves in. The primary concern for a 48-hour delay is thick cloud,” launch forecasters said. 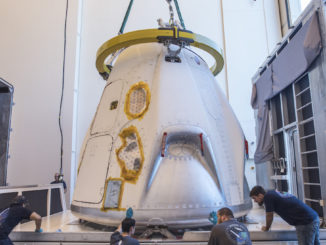 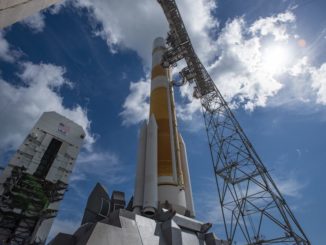 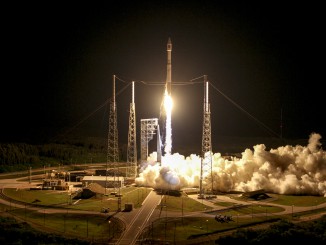