United Launch Alliance ground crews on California’s Central Coast are gearing up to send a classified U.S. government spy satellite into orbit as soon as Monday — weather permitting — aboard one of the company’s four remaining Delta 4-Heavy rockets.

Liftoff of the powerhouse hydrogen-fueled launcher is set for 1:46 p.m. PDT (4:46 p.m. EDT; 2046 GMT) from Vandenberg Air Force Base, California. There is a 40% chance of favorable weather for Monday’s launch opportunity, according to the official launch forecast issued by the U.S. Space Force.

The weather concerns Monday include surface winds, cumulus clouds, thick clouds, and precipitation. The exact duration of the launch window Monday has not been disclosed. The NRO said earlier this month the mission’s launch period extended from 12:39-3:57 p.m. PDT (3:39-6:57 p.m. EDT; 1939-2257 GMT).

If the launch is scrubbed Monday, there is also a 40% chance of acceptable conditions for liftoff Tuesday.

ULA, a 50-50 joint venture between Boeing and Lockheed Martin, has four Delta 4-Heavy rockets left to launch in the next few years. All are assigned to haul top secret satellites into space for the National Reconnaissance Office, which owns the U.S. government’s fleet of orbiting spy platforms.

The rest of the Delta rocket family, including the single-core Delta 4-Medium, has been retired as ULA transitions to the next-generation Vulcan Centaur rocket. The Delta 4-Heavy, created by joining there Delta 4 common booster cores together, is tailored for carrying the U.S. government’s largest intelligence-gathering spacecraft into orbit.

The next Delta 4-Heavy launch, designated NROL-82, will blast off from Space Launch Complex-6 at Vandenberg, a picturesque location overlooking the Pacific Ocean. It will be the 42nd flight of a Delta 4 rocket since 2002, and the 13th launch of the Delta 4-Heavy configuration.

The NROL-82 mission will be ULA’s first launch of 2021. If the rest of ULA’s launch schedule remains on track, the company could conduct as many as 10 missions before the end of December, but the majority of the flights aren’t expected to take off until the second half of the year.

While government officials have not disclosed any information about the payload riding on the NROL-82 mission, independent analysts believe the Delta 4-Heavy rocket will likely deliver the NRO’s next KH-11 optical reconnaissance satellite to orbit. The KH-11 satellites are about the size of a bus, fitted with large telescopes pointing down at Earth to collect unmatched high-resolution images of strategic locations around the world for analysis by U.S. intelligence agencies.

Often called “Keyhole” satellites, he KH-11 spacecraft require the heavy-lifting capability of the Delta 4-Heavy, along with the rocket’s voluminous payload shroud. All of the Delta 4-Heavy missions from Vandenberg have carried KH-11 satellites to space. The exact imaging capabilities of the KH-11 satellites are top secret, and the NRO does not publicly identify the types of spacecraft on each of its launches.

Information about the Delta 4-Heavy rocket’s post-launch trajectory released by ULA and published in open navigational warnings indicate the launcher will head slightly west of due south from Vandenberg, according to Marco Langbroek, a Dutch archaeologist and an expert in the orbits of military satellites.

The ground track suggests the Delta 4-Heavy will place its cargo into a sun-synchronous polar orbit with an inclination of about 98 degrees to the equator, Langbroek wrote on his website.

The timing of the launch Monday closely aligns with the orbital plane of a KH-11 satellite launched in January 2011 aboard a previous Delta 4-Heavy mission. The new satellite might be a replacement for that 10-year-old spacecraft.

The NRO has at least three active KH-11 satellites launched in 2005, 2011, and 2013, all flying in the same type of sun-synchronous orbit. The most recent Delta 4-Heavy launch from Vandenberg in 2019 deployed its NRO spy satellite cargo into a different orbit, raising questions whether it carried a KH-11 satellite or another kind of clandestine spacecraft.

Ted Molczan, an experienced satellite tracker in Canada, agreed with Langbroek’s assessment that the NROL-82 mission will haul a KH-11-type satellite into space.

In 2019, former President Donald Trump tweeted a declassified image widely believed to be from a KH-11 satellite, showing damage on an Iranian launch pad after a rocket explosion. Using sun angles, civilian sleuths estimated the time the picture was taken, then cross-checked the time with the known positions of NRO spy satellites.

Ground crews installed the NROL-82 mission’s secret payload on top of the Delta 4-Heavy earlier this month, the final element to complete stacking of the 233-foot-tall (71-meter) rocket.

The NROL-82 mission will be the ninth Delta 4 mission to depart from the SLC-6 launch pad, a facility once designed to host space shuttle launches on the West Coast. When NASA abandoned plans to fly space shuttles from California after the Challenger accident, the launch pad languished until Boeing became next long-term tenant to enable Delta 4 launches.

Like all launches for the National Reconnaissance Office, the final phase of the Delta 4-Heavy mission Monday will occur out of public view. The NRO typically orders news blackouts and officials launch broadcasts conclude a few minutes after liftoff.

The Delta 4-Heavy rocket’s three Aerojet Rocketdyne RS-68A main engines will drive the launcher off the planet with 2.1 million pounds of thrust, equivalent to 51 million horsepower.

Heading south over the Pacific, the rocket will surpass the speed of sound at T+plus 1 minute, 23 seconds.

The core engine of the triple-body rocket will run at a partial thrust setting for the first few minutes of the flight to save propellant. The side boosters will consume their fuel and shut down their engines at T+plus 3 minutes, 56 seconds. The boosters will jettison two seconds later to fall into the Pacific Ocean.

The Delta 4-Heavy’s payload fairing will jettison at T+plus 6 minutes, 7 seconds, and ULA’s launch broadcast will conclude moments later. ULA and the NRO are expected to confirm the outcome of the rest of the mission on social media and in press releases later Monday afternoon.

Assuming the Delta 4-Heavy is carrying a KH-11 spysat, the rocket’s upper stage is expected to target an elongated orbit ranging as high as 620 miles (1,000 kilometers) in altitude.

After Monday’s launch, ULA will have one more Delta 4-Heavy launch left in its backlog from Vandenberg. The other two Delta 4-Heavy missions left to launch will blast off from Cape Canaveral Space Force Station, Florida. 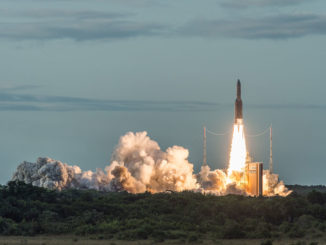 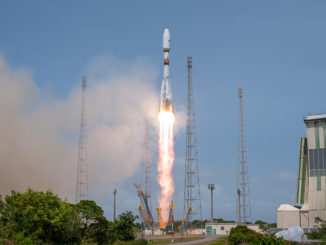 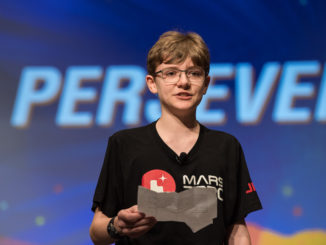