A Northrop Grumman Cygnus cargo ship arrived at the International Space Station on Monday, delivering nearly four tons of supplies and experiments to the research lab and its crew, including a $23 million titanium toilet and a high-definition virtual reality camera planned for use on a future spacewalk.

Capping an automated laser-guided rendezvous sequence, the Cygnus cargo freighter moved within 40 feet (12 meters) of the space station early Monday, close enough for the lab’s Canadian-built robotic arm to reach out and grapple it.

Northrop Grumman named the Cygnus supply ship the “S.S. Kalpana Chawla” in honor of the first woman of Indian descent to fly into space. Chawla flew on two space shuttle missions, and she died with her six crewmates on the space shuttle Columbia in 2003.

“In the name of space exploration, all have given some, some have given all,” Cassidy said after capturing the Cygnus spacecraft Monday. “It’s an honor to welcome the good ship Kalpana Chawla. Welcome aboard the International Space Station, KC.”

This Cygnus is named for astronaut Kalpana Chawla, who died with six crewmates on the space shuttle Columbia in 2003.https://t.co/2hLjcCgtBx pic.twitter.com/M5uNHClDDr

Ground controllers at the Johnson Space Center in Houston took control of the robot arm later Monday morning to attach the Cygnus spacecraft to a berthing port on the space station’s Unity module, where it will stay for around two months.

Cassidy and his crewmates will open hatches leading to the S.S. Kalpana Chawla’s pressurized cargo compartment to begin unpacking the supplies and experiments inside.

The arrival of the S.S. Kalpana Chawla supply ship Monday marked the 14th delivery of cargo to the space station by a Cygnus spacecraft since 2013.

The Cygnus cargo mission blasted off Friday night from the Mid-Atlantic Regional Spaceport aboard an Antares rocket, following delays earlier in the week caused by bad weather and a ground software issue.

The S.S. Kalpana Chawla is packed with 7,829 pounds (3,551 kilograms) of supplies and experiments heading to the International Space Station. Here’s a breakdown of the cargo manifest provided by NASA:

The Cygnus supply ship will remain berthed Unity module until mid-December, when it will be released by the station’s robotic arm. The automated cargo carrier, loaded with trash after its departure from the station, will perform an in-flight combustion experiment before re-entering the atmosphere and burning up over the South Pacific Ocean to end its mission.

Among clothing and other crew provisions, the Cygnus mission will deliver an upgraded toilet to the space station, allowing astronauts to test its functionality before a similar commode flies on the Orion crew capsule to the moon.

The new toilet, or Universal Waste Management System in NASA-speak, is roughly the size of a camper commode. It’s about 65 percent smaller and 40 percent lighter than the toilet currently on the space station, according to Melissa McKinley, logistics reduction manager for the agency’s advanced exploration systems division.

NASA partnered with Collins Aerospace to develop the new toilet, which officials said is better suited for female crew members than the existing commode on the space station. Engineers made parts of the toilet out of titanium to withstand acid used to pre-treat urine before the fluid is recycled back into drinking water for the astronauts, said Jim Fuller, the toilet’s project manager at Collins Aerospace.

“On Earth, we have gravity that helps pull the feces and urine away from our body and into the toilet,” Fuller said. “In space, where we have microgravity, we don’t have that luxury. The dual fan separator actually creates the motive force by creating a strong airflow that helps pull the urine and feces away from the body.
“When the astronauts have to ‘go,’ we want to allow them to boldly go,” Fuller said.
Designers wanted the new toilet to be easier to use for women flying on the space station,
“The funnel design was was completely re-contoured to better accommodate the female anatomy,” McKinley said. “And particularly, this is a concern when the crew members are trying to do ‘dual ops,’ when they’re they’re doing both defecation and urination at the same time, just the alignment of all of that at once … Trying to make that more appropriate for female use was a big driver.”

There’s also a virtual reality camera flying to the space station that will capture imagery of a future spacewalk. 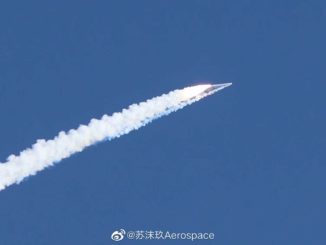 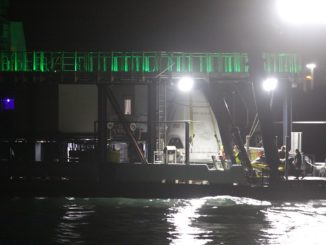 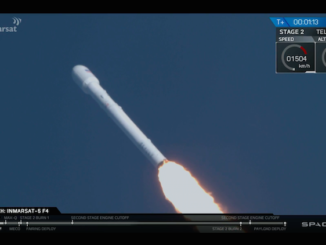