A Russian Soyuz rocket launched Monday from the Plesetsk Cosmodrome with 22 satellites for operators in Russia, Europe, Canada, the United States, and the United Arab Emirates.

Kerosene-fueled engines on the Soyuz boosters, core stage and third stage powered the rocket on a northerly trajectory from Plesetsk over the Arctic Ocean. Less than 10 minutes into the mission, the Soyuz third stage released a Fregat upper stage to begin a series of orbital adjustment burns.

The Fregat upper stage first flew into an orbit around 932 miles (1,500 kilometers) above Earth, with an inclination of 82.5 degrees to the equator. The upper stage released three 617-pound (280-kilogram) Russian Gonets-M communications satellites into that orbit.

Russian government ministries and civilian authorities use the Gonets-M satellites to relay secure messages between mobile terminals and fixed operators.

The payloads launched Monday are designated Gonets-M satellites No. 27, No. 28 and No. 29. The Gonets system is operated by a public-private partnership between Roscosmos — the Russian space agency — and Russian industry.

According to ISS Reshetnev, the manufacturer of the Gonets satellites, the network is used for tracking cargo and vehicles, monitoring industrial activity, provides communications in remote areas, supports emergency responders, and helps in other global corporate and government data transmission networks.

With the Gonets-M satellites separated, the Fregat upper stage fired two more times to reduce the rocket’s altitude and change its orbital inclination. The maneuvers put the Fregat stage into a circular 357-mile-high (575-kilometer) orbit inclined 97.67 degrees to the equator.

The change in altitude and inclination was unusually large for a rideshare mission in low Earth orbit. After arriving in the lower orbit, the Fregat upper stage commenced a deployment sequence for the remaining 19 satellites.

“This flexibility in target orbits’ formation is unique and has no analogues in the global launch services market,” tweeted Glavkosmos, a subsidiary of Roscosmos which sold the excess capacity on the Soyuz launch to international satellite operators.

Kepler previously launched three prototype nanosatellites. The GEN1 satellites, based on a 6U-XL CubeSat bus, are production models with higher power and improved antennas to support Ku-band and narrowband communications capabilities, according to Kepler.

“This is a milestone event for Kepler marking the start of our aggressive launch campaign in the coming months,” said Mina Mitry, CEO of Kepler, in a statement. “It is through the unrelenting work of our team that we are heading to orbit with the first satellites entirely produced in our facility. Our current rate of satellite production will allow our network to grow significantly in the coming months, and we look forward to putting the service in the hands of our customers.”

The MeznSat CubeSat from the United Arab Emirates also hitched a ride into orbit Monday. The toaster oven-sized nanosatellite was funded by the UAE Space Agency and developed at Khalifa University of Science and Technology in partnership with the American University of Ras Al-Khaimah.

MeznSat is equipped with a shortwave infrared spectrometer to monitor greenhouse gases, such as carbon dioxide and methane, over the UAE. The nanosatellite is designed for a three-year mission.

A growing number of satellites are transmitting signals in low Earth orbit, such as spacecraft in SpaceX’s Starlink network. SALSAT’s primary instrument is a spectrum analyzer that will help assess usage of radio spectrum in VHF, UHF, and S-band frequencies.

“The project will look to explore the possibilities for the multiple use of existing frequencies as well as identify their location within the spectrum,” TU Berlin said. “A further goal is to detect and locate interference and disruptions within the bands.”

“The challenge lies in the fact that the communication spectrum is very limited and has to be shared by all users. There is also the issue of sustainability, of improving and increasing the usability of this spectrum,” said Jens Grosshans, project leader of SALSAT.

Four 3U CubeSats developed at the Würzburg Center for Telematics in Germany will perform formation-flying experiments in low Earth orbit. The project’s developers say the four NetSat nanosatellites — each with a launch weight of about 8.8 pounds (4 kilogams) — will demonstrate “self-organization of several satellites in three-dimensional space” for the first time.

The technology to be demonstrated by the NetSat project could be useful in future constellations of satellites for Earth-imaging and climate research, according to Würzburg Center for Telematics.

There were two slightly larger microsatellites on Monday’s mission. Exolaunch did not disclose the customer the microsatsatellites, but they are believed to be owned by ICEYE, a Finnish company building out a fleet of small radar remote sensing satellites.

Another 3U CubeSat for an unnamed European commercial customer also launched Monday, according to Exolaunch.

“This was an ambitious mission and it has been a privilege launching satellites for so many talented teams,” Jeanne Medvedeva, Exolaunch’s vice president of launch services. “With this launch, we have deployed over 100 satellites into orbit, hitting a major milestone in the launch industry.” 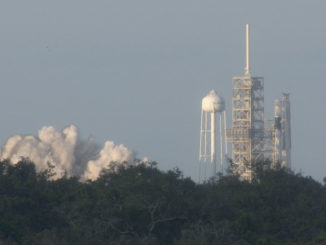 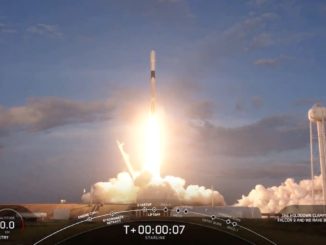 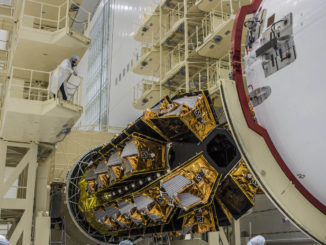