Intelsat and SES, operators of the two largest fleets of geostationary communications satellites, have ordered 10 spacecraft from Maxar, Northrop Grumman and Boeing for launches beginning in 2022 to replace C-band capacity being transitioned to 5G cellular network services.

The bulk satellite orders are valued at more than $1 billion, according to industry sources, but exact financial arrangements were not disclosed by Intelsat and SES. All of the satellites will be positioned in geostationary orbit more than 22,000 miles (nearly 36,000 kilometers) over the equator, within line-of-sight of customers in the United States.

Launch contracts for the new C-band satellites were not announced by Intelsat or SES.

Intelsat and SES awarded the satellite manufacturing contracts as part of the Federal Communications Commission’s order finalized earlier this year to clear 300 megahertz of C-band spectrum for the roll-out of 5G mobile connectivity networks.

The FCC plans to auction U.S. C-band spectrum — currently used for satellite-based video broadcast services to millions of customers — to 5G operators in December. In compensation for losing the spectrum, Intelsat is set to receive $4.87 billion and SES will get $3.97 billion from 5G bidders if they can accelerate the transition of C-band services to a smaller swath of spectrum by December 2023, two years before the FCC’s mandated deadline.

Intelsat and SES — along with operators with a smaller share of the U.S. C-band market — will also be reimbursed for their C-band relocation costs, including satellite manufacturing and launch expenses.

As part of the agreement, the satellite operators were incentivized to buy new C-band broadcasting satellites from U.S. manufacturers to operate in the 4.0 to 4.2 gigahertz swath of the C-band spectrum. The lower portion of the band previously allocated to satellite operators — 3.7 to 4.0 megahertz — is being transitioned to 5G services.

Intelsat announced agreements Monday with Maxar Technologies and Northrop Grumman to build six new C-band communications satellites. Four of the new Intelsat satellites will be manufactured by Maxar in Palo Alto, California, and two will be produced by Northrop Grumman in Dulles, Virginia.

The Maxar-built satellites — named Galaxy 31, Galaxy 32, Galaxy 35 and Galaxy 36 — will be based on the manufacturer’s 1300-class spacecraft platform, and Northrop Grumman will build two satellites — designated Galaxy 33 and Galaxy 34 — for Intelsat on its GEOStar design.

Maxar said it will deliver the four C-band satellites to Intelsat in 2022, and Northrop Grumman said the two spacecraft it’s building will be ready for launch in mid-2022.

Intelsat is also finalizing a contract with a U.S. manufacturer to build a seventh C-band satellite needed to replace capacity being transitioned to 5G usage.

“Quickly clearing 300 megahertz of the U.S. C-band spectrum to make way for 5G wireless applications is a complex task, layered with a significant number of highly interdependent technical activities, including building and launching multiple new satellites designed to operate at the higher portion of the band,” said Mike DeMarco, Intelsat’s chief services officer. “Intelsat looks forward to collaborating with our longstanding partners Maxar Technologies and Northrop Grumman on these critical builds, essential to clearing portions of the C-band spectrum and cementing America’s leadership in 5G.”

Headquartered in Northern Virginia, Intelsat filed for Chapter 11 bankruptcy protection in May in hopes of a financial restructuring to allow it to shed billions of dollars in debt. Intelsat also said the C-band relocation efforts, reduced revenues and the economic slowdown caused by the coronavirus pandemic were factors in the bankruptcy.

Intelsat said in May it needed to spend more than $1 billion to begin work to clear the C-band spectrum being transition to 5G services, and the company needs to spend much of that money up-front, before receiving $4.87 in accelerated relocation payments. Intelsat obtained court approval to go ahead with financing of the new C-band satellites earlier this month.

Intelsat was founded in 1964 as an intergovernmental organization, then privatized in 2001. The operator says it is the largest provider of communications services for the U.S. military.

“As the foundational architects of satellite technology and leading experts of integrated communications technologies, Intelsat is committed to advancing — at an accelerated pace — America’s position in the race to 5G,” said Stephen Spengler, Intelsat’s CEO, in a statement last month. “With decades-deep institutional knowledge of the U.S. C-band, we understand what’s required to successfully and quickly transition current users, while maintaining high-quality, uninterrupted broadcast to more than 100 million American homes and businesses.”

Intelsat says its C-band clearing efforts also include working with customers to retune and repoint ground-based antennas, and to install 5G signal-blocking filters.

The SES 20 and SES 21 satellites will be built on Boeing’s 702SP spacecraft design in El Segundo, California, using all-electric propulsion for all post-launch maneuvers.

SES said each satellite will have 10 primary transponders, plus back-up equipment, to deliver television services to more than 120 million homes and enable other critical data services. The satellites are scheduled for launch in the third quarter of 2022, according to SES.

SES is expected to buy two more C-band satellites in the coming weeks, according to Space News.

“Given the FCC’s strong leadership in providing for accelerated clearing of precious C-band spectrum in the U.S., our focus is on delivering on our commitment and making the spectrum available in the shortest possible time while ensuring that we protect the broadcast customers and communities that we have built over 35 years,” said Steve Collar, CEO at SES.

“To meet our deadlines to clear C-band spectrum, we have selected established American satellite manufacturers in Northrop Grumman and Boeing with their focus on heritage, reliability and minimal risk to build these four satellites, enabling us to fully support the FCC’s 5G Fast initiative,” Collar said in a statement.

SES said in May that its board of directors approved an investment envelope of $1.6 billion to procure and launch new C-band satellites, and pay for other equipment and services, such as signal filters on ground antennas. SES said it intends to place the “vast majority” of the $1.6 billion investment with U.S. suppliers.

Suzanne Ong, an SES spokesperson, said Tuesday that the company is looking at using U.S. companies for all of SES’s scheduled satellite launch services. 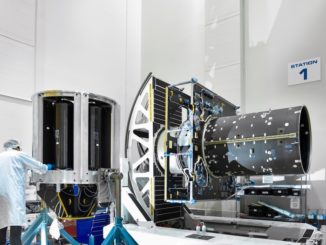 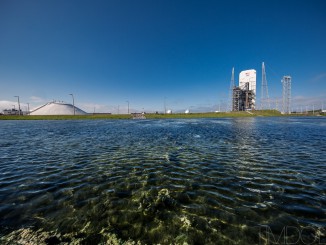 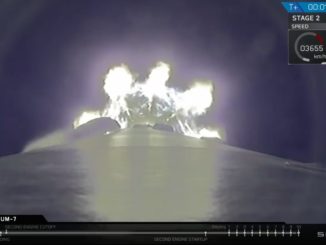