The kerosene-fueled booster engine powered the rocket through a low cloud layer, and the Atlas 5 disappeared from the view of spectators within seconds. A powerful rumble left in the Atlas 5’s wake moved across the Florida spaceport, lingering after the rocket’s ascent was obscured by clouds.

Flying without any strap-on solid rocket boosters, the Atlas 5 arced toward the northeast and shed its bulbous payload fairing around the X-37B spaceplane nearly four minutes into the mission, once the rocket climbed into the rarefied vacuum of space. The Russian-made first stage engine shut down next, and a hydrogen-fueled Aerojet Rocketdyne RL10 engine ignited to continue accelerating the X-37B spaceship into orbit.

At the request of the U.S. Air Force, United Launch Alliance’s live broadcast ended coverage of the mission’s progress around five minutes after liftoff. The Centaur upper stage was expected to deliver the X-37B — also known as the Orbital Test Vehicle — into orbit in less than 20 minutes, then release the spacecraft.

The Centaur was programmed to re-enter the atmosphere and burn up over the Indian Ocean southwest of Australia around an hour into the mission, according to airspace warning notices released to the public. The re-entry was intended to ensure the launch did not leave any unnecessary space junk in orbit.

Trajectory information gleaned from the airspace warnings suggested the Atlas 5 rocket targeted placement of the X-37B spacecraft in an orbit more than 200 miles (about 350 kilometers) in altitude, with an inclination of around 44 degrees to the equator, according to Marco Langbroek, an archaeologist in the Netherlands who also tracks satellites.

Military officials did not disclose the exact orbital parameters.

ULA declared the launch a success in a press release later Sunday morning, punctuating the 84th flight of an Atlas 5 rocket since its debut in 2002, and the third Atlas 5 flight of 2020.

The U.S. military and ULA dedicated the launch to coronavirus first responders, front-line workers, and victims of the disease. The launch was part of the military’s “America Strong” campaign, joining a series of flyovers of cities nationwide by the Air Force Thunderbirds and Navy Blue Angels to salute health care professionals and coronavirus patients and victims.

Shrouded in secrecy, the automated X-37B spaceplane is a reusable vehicle designed to deploy small satellites, host experiments, and pursue other classified objectives. Flying without any astronauts on-board, the vehicle generates electricity with a solar array and can autonomously guide itself to a runway landing at the end of each mission.

The Air Force has disclosed it has two X-37B vehicles in its inventory, and both were built by Boeing. Officials have not confirmed which X-37B vehicle was launched Sunday.

“X-37B is a really interesting machine,” said Jim Chilton, senior vice president of Boeing’s space and launch division. “It’s a reusable spacecraft. It is autonomous, it flies without crew. It can be rapidly reconfigured to host a wide variety of experiments, and it can take off from standard launch pads on standard rockets under fairing, and it can land autonomously through public airspace.

“You add that all up, there’s a lot of innovation in this machine,” Chilton said during ULA’s launch broadcast Sunday.

The mission launched Sunday is the sixth flight of the X-37B program since 2010. It carries more experiments than any previous X-37B mission, according to the Air Force.

The sixth X-37B mission — designated OTV-6 — is the first to fly with a new service module attached to the aft end of the spaceplane, providing additional capacity for experiments and payloads. The X-37B itself, measuring more than 29 feet (8.9 meters) long, also has a cargo bay inside its fuselage.

Secretary of the Air Force Barbara Barrett said earlier this month that the Air Force’s Rapid Capabilities Office is partnering with the U.S. Space Force and the Air Force Research Laboratory on the spaceplane’s sixth mission, which “maximizes the X-37B’s unique capabilities.”

“This important mission will host more experiments than any prior X-37B flight, including two NASA experiments,” Barrett said Wednesday. “One is a sample plate evaluating the reaction of select significant materials to the conditions in space. The second studies the effect of ambient space radiation on seeds.”

“This machine is a great blend of defense and research,” Chilton said.

“NASA has a seed experiment on this flight,” he said. “The idea is they’ve collected a lot of data on the space station around radiation effects on seeds. Long-term human trips (into space) would require some agriculture.

“X-37B can go some places the station doesn’t go, collect different kinds of radiation, and our payload bay can (provide) a different kind of shielding,” Chiltonn said. “So they’ll get more data to complete their set.”

“The service module extends the vehicle capability,” Chilton said. “We can host more payloads that way. so this is the most we’ve ever carried on an X-37B mission. One of the things we’re carrying on that service module, which can release independent satellites, is a satellite designed and built by cadets at the U.S. Air Force Academy.”

The satellite, named FalconSAT-8, has its own suite of five scientific experiments and tech demo payloads.

Col. Luke Sauter, professor and head of the astronautics department at the Air Force Academy, said the FalconSAT-8 is about the size of a standard dishwasher and weighs a little more than 300 pounds (136 kilograms).

The spacecraft’s will test a novel electromagnetic propulsion system, low-weight antenna technology and a commercial reaction wheel to provide attitude control in orbit, Sauter said in response to questions from Spaceflight Now.

According to the Air Force Academy, FalconSAT 8’s experiments include:

Sauter said the schedule for the deployment of the FalconSAT 8 spacecraft from the X-37B spacecraft remains fluid, and “may be days, weeks or months.”

“We’re a secondary (payload) flying with the host mission, and we’ll likely be released when it impacts their mission the least,” Sauter said. “We already have cadets trained and ready to perform operations when the time comes.”

In a statement before the launch, the Air Force said it “continues to push the flight envelope for the X-37B, and will build upon its growing collaboration with experiment partners with its sixth mission.”

Barrett said the Air Force is declassifying some of the service’s space activities. The X-37B, which Barrett said was “previously cloaked in secrecy,” has accumulated 2,865 days in orbit on five previous missions.

“Each flight has been successively longer, setting a record for duration,” Chilton said. “If you add up all the missions, just under eight years in orbit and a billion miles.”

In addition to hosted payloads, the X-37B itself is an experimental vehicle. Boeing said in a statement after Sunday’s launch that the mission “will test reusable space vehicle technologies.”

The X-37B remains an Air Force asset, officials said. The newly-established Space Force is responsible for the launch, on-orbit operations and landing.

“The ability to test new systems in space and return them to Earth is unique to the X-37B program and enables the U.S. to more efficiently and effectively develop space capabilities necessary to maintain superiority in the space domain,” the Air Force said in a statement.

Boeing has built two X-37B vehicles for orbital flights. The program began under NASA management before transferring to DARPA in 2004, then to the Air Force in 2006.

The first X-37B space mission launched in April 2010. Four of the previous X-37B flights have launched on ULA Atlas 5 rockets, and one lifted off on a SpaceX Falcon 9 launcher.

Boeing and military teams ready the reusable spaceplanes inside a former space shuttle processing facility at Kennedy. The first three X-37B missions landed at Vandenberg Air Force Base, but the most recent two flights concluded with returns to the Shuttle Landing Facility runway at NASA’s Kennedy Space Center, a few miles from the X-37B’s hangar.

Boeing is responsible for refurbishing the X-37B between missions, and integrates experiments on the vehicle inside a modified space shuttle processing facility at Kennedy.

“You can say that the X-37B stands on the shoulders of the space shuttle,” Chilton said. “The differences? The X-37B is autonomous, the X-37B is more rapidly reconfigurable, and frankly the challenge of coming down through public airspace without crew has been overcome, and proven to work well.

“Also the difference is the duration the X-37B can fly,” Chilton said. “Our last mission was 780 days, and that’s a lot longer than the shuttle could stay aloft.” 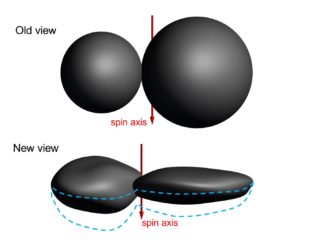 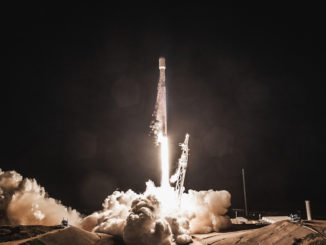 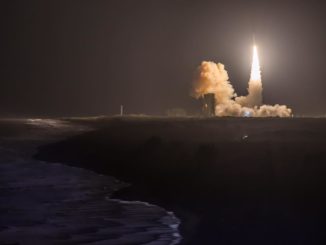