SpaceX completed Friday the last drop test of the Dragon crew capsule’s parachutes before the first launch of astronauts on the human-rated ship May 27, while technicians at Cape Canaveral have mated the spacecraft’s crew module with its unpressurized trunk section.

The drop test from a C-130 cargo plane Friday was the 27th and final test of the “Mark 3” parachute design SpaceX will use for the Crew Dragon spacecraft. Drogue parachutes and then four main chutes unfurled from a test vehicle designed to mimic the Crew Dragon’s weight during return to Earth.

SpaceX said in a tweet that the parachute test moves the Crew Dragon “one step closer” to flying NASA astronauts Bob Behnken and Doug Hurley to the International Space Station, “and safely returning them back to Earth.

The parachute and spacecraft processing milestones kick off a busy month of preparations ahead of the the Crew Dragon’s launch on a SpaceX Falcon 9 rocket set for May 27 from pad 39A at NASA’s Kennedy Space Center in Florida.

The test flight will head for the International Space Station, where Behnken and Hurley will live and work for one-to-four months before returning to Earth for a splashdown in the Atlantic Ocean just off Florida’s East Coast.

The launch later this month will mark the first time astronauts have flown into Earth orbit from a U.S. spaceport since the retirement of the space shuttle in July 2011.

“My heart is sitting right here (motioning to throat), and I think it’s going to stay there until we get Bob and Doug safely back from the International Space Station,” said Gwynne Shotwell, SpaceX’s president and chief operating officer, in a press conference Friday. “But between now and then, there’s still work to do.”

NASA has awarded SpaceX more than $3.1 billion since 2011 to develop, test and fly the Crew Dragon spacecraft. SpaceX has put in its own funding, but Shotwell could not provide a figure Friday for the level of internal funds SpaceX has spent on developing the crew capsule.

The public-private partnership is a hallmark of NASA’s strategy since the end of the space shuttle program to commercialize transportation to and from low Earth orbit, beginning with cargo services for the space station pioneered by SpaceX’s Dragon capsule and the Cygnus supply ship owned by Northrop Grumman, formerly known as Orbital ATK.

“This is a new generation, a new era in human spaceflight,” said NASA Administrator Jim Bridenstine. “And when I say it’s new what I mean is, NASA has long had this idea that we need to purchase, own and operate hardware to get to space. In the past that has been true, but now, in this new era … NASA has an ability to be a customer, one customer of many customers in a very robust commercial marketplace in low Earth orbit.”

NASA selected Boeing alongside SpaceX in 2014 to design and build new commercial spaceships to ferry astronauts to and from the space station. Boeing’s Starliner ship is unlikely to fly with astronauts until early 2021 after an unpiloted test flight in December encountered software trouble, preventing the capsule from docking with the space station.

Bridenstine said NASA and SpaceX are continuing preparations for the Crew Dragon test flight — designated Demo-2 — amid the coronavirus pandemic while introducing new physical distancing guidelines for the astronauts and support teams.

“We’re going to do it in the midst of the coronavirus pandemic,” Bridenstine said. “I’m going to tell you that this is a high-priority mission for the United States of America. We, as a nation, have not had our own access to the International Space Station for nine years.”

In the time since the last shuttle flight, all astronauts traveling to the space station have flown aboard Russian Soyuz capsules. In the most recent agreement with Roscosmos, the Russian space agency, NASA paid the Russian government more than $80 million per round-trip seat on the Soyuz spacecraft.

Kathy Lueders, manager of NASA’s commercial crew program, said Friday that NASA and SpaceX engineers are “making sure that all the Is are dotted and Ts are crossed” in preparation for the Crew Dragon launch.

The work in the coming weeks will make sure SpaceX and NASA “are ready for this important mission to safely fly Bob and Doug up to the International Space Station, serve as a lifeboat, and return them to their families,” Lueders said.

Behnken, 49, will serve as joint operations commander for the Demo-2 mission, responsible for rendezvous, docking, undocking and other activities at the International Space Station. Hurley, 53, will be the spacecraft commander, responsible for launch, landing and recovery, according to NASA.

Both astronauts joined NASA’s astronaut corps in 2000, and each has flown twice on space shuttle missions. Behnken and Hurley are also both married to other astronauts.

“I think we have a different perspective of the importance of coming to Florida, launching again on an American rocket from the Florida coast,” Behnken said. “And generations of people who maybe didn’t get a chance to see a space shuttle launch, getting a chance again to see human spaceflight in our own backyard, if you will, is pretty exciting to be a part of.

“I think that’s the thing that’s most exciting for me, as well as on my first flight, I didn’t have a small child,” he said. “I didn’t have a son, so I’m really excited to share the mission with him and have him have a chance to be old enough at six to see it and share it with me when I get home and while I’m on orbit.”

Hurley piloted the shuttle Atlantis on the final space shuttle mission in July 2011.

“It’s well past time to be launching an American rocket from the Florida coast to the International Space Station, and I am certainly honored to be part of it,” Hurley said.

“We would be asked questions along the lines of, well, the space program is over because the shuttle is not flying,” Hurley said. “And that certainly was not the case. We’ve had people on board the International Space Station since the fall of 2000. And we continue to fly to the space station on Soyuz vehicles. So part of it was just a lack of understanding by the public as far as what we were continuing to do as an agency, but it was also the time it took to develop new vehicles in order to take their place, take the shuttle’s place, to get folks to and from the International Space Station from the United States.”

Once Behnken and Hurley return to Earth, NASA will formally certify the Crew Dragon for regular crew rotation flights to the space station, each carrying four astronauts. Another Crew Dragon is scheduled for launch later this year with three NASA astronauts and a Japanese space flier.

The Dragon crew has essentially been in quarantine since March, when the threat of coronavirus interrupted daily life for millions of Americans. Behnken and Hurley will begin a formal quarantine protocol next week, then spend a few days inside a controlled facility at NASA’s Johnson Space Center in Houston before flying to Kennedy in a NASA aircraft May 20.

The astronauts will participate in a final integrated simulation Monday with NASA and SpaceX ground controllers and mission managers.

“Then we start a quarantine process which escalates as we get closer to launch,” Hurley said. “And we also get some off time to kind of get everything in our lives sort of squared away since we’ve been busy getting ready for this flight, and we are likely to be in space for a few months.”

“We have a few more sims with SpaceX, we’ll have some proficiency sims later on, before we go down to Kennedy,” Hurley said. “And then we’ll get down to Kennedy around six or seven days before launch and then spend the rest of the time (in Florida) prepping from that location in the astronaut crew quarters down there.”

Lueders said Friday that NASA has reviewed SpaceX’s investigation into an engine failure that occurred on a Falcon 9 launch in March. One of the rocket’s nine Merlin engines shut down prematurely during a launch with 60 Starlink Internet satellites, but the rocket overcame the malfunction and still delivered the payloads to their intended orbit.

“We’re finishing testing on some other launch vehicle components,” Lueders said. “We have reviewed the anomaly resolution of the Starlink launch and actually have cleared the engines on our vehicle for that failure, so that actually is behind us right now.

In mid-May the Dragon spacecraft is expected to be transferred from a processing facility at Cape Canaveral Air Force Station to the nearby Kennedy Space Center, where the crew capsule will be attached to its Falcon 9 launcher inside a hangar near the southern perimeter of pad 39A.

Behnken and Hurley are scheduled to fly to Florida’s Space Coast on May 20.

A test-firing of the Falcon 9 rocket is scheduled around May 22, followed the next day by a “dry dress” rehearsal when the astronauts will put on their black and white SpaceX flight suits and strap inside the Crew Dragon spacecraft at the launch pad.

A launch readiness review is scheduled for May 25.

On May 27, Behnken and Hurley will again put on their flight suits inside the Neil Armstrong Operations and Checkout Building at Kennedy, the same facility where Apollo and shuttle astronauts prepared for launch. They will ride inside a Tesla Model X from the O&C Building to pad 39A, passing by the iconic Vehicle Assembly Building and the Press Site on the way to the seaside launch complex.

They will begin boarding the Crew Dragon spaceship around three hours before liftoff. SpaceX’s ground crew will close the Dragon’s side hatch and evacuate the pad before fueling of the Falcon 9 rocket with super-chilled kerosene and liquid oxygen propellants.

SpaceX’s sleek crew access arm, installed on pad 39A in 2018, will retract around 42 minutes before liftoff. The Dragon’s powerful abort engines will be armed 37 minutes prior to launch, giving the astronauts the ability to escape an explosion or other emergency during fueling of the Falcon 9 rocket.

Kerosene and liquid oxygen will begin flowing into the two-stage launcher 35 minutes before liftoff, which is timed for 4:32 p.m. EDT (2032 GMT) on May 27.

Assuming liftoff occurs May 27, the Crew Dragon is slated to autonomous dock with the International Space Station on May 28 at approximately 11:29 a.m. EDT (1529 GMT).

Hurley and Behnken will take over manual control of the spaceship at multiple points during the Dragon’s trip to the space station, testing out their ability to fly the capsule using novel touchscreen controls in the cockpit. 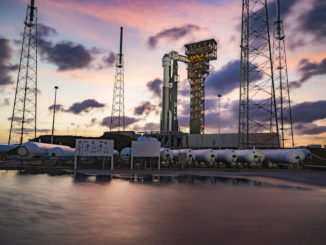 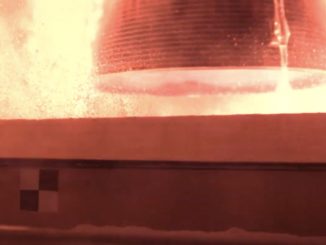 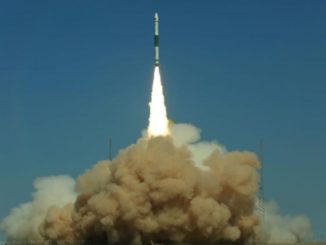