Christina Koch, veteran of six spacewalks outside the International Space Station — including the first all-female excursion — joined a Russian commander and an Italian flight engineer for a fiery plunge to landing in frigid Kazakhstan early Thursday, setting a new record for the longest single flight by a female.

Strapped into the center seat of their cramped Soyuz MS-13/59S ferry ship, commander Alexander Skvortsov, flanked on the left by Italian co-pilot Luca Parmitano and on the right by Koch, undocked from the space station’s upper Poisk module at 12:50 a.m. EST.

Looking on from inside the station were Expedition 62 commander Oleg Skripochka and Koch’s two spacewalking partners, Jessica Meir and Drew Morgan.

After moving a safe distance away, Skvortsov monitored an automated rocket firing starting at 3:18 a.m., a four-minute 38-second braking “burn” that slowed the ship by about 286 mph. That was just enough to drop the far side of the spacecraft’s orbit deep into the atmosphere, setting up a landing on the steppe of Kazakhstan.

About a half hour later, after discarding the ship’s no-longer-needed lower propulsion module and upper orbital compartment, the central crew compartment, the only one with a protective heat shield, slammed back into the discernible atmosphere at an altitude of 62 miles. The ship quickly decelerated, briefly enduring re-entry temperatures up to 3,000 degrees as it descended.

Twenty-three minutes later, suspended under a large orange-and-white parachute, the crew compartment settled to a jarring rocket-assisted touchdown at 4:12 a.m. (3:12 p.m. local time) near the town of Dzhezkazgan.

Russian recovery crews, along with NASA and European Space Agency flight surgeons and support personnel, were stationed nearby and were quickly on the scene to help the returning station fliers out of the Soyuz as they began re-adjusting to the unfamiliar effects of gravity. All three appeared in excellent health, smiling broadly and waving to ground crews as they were pulled from the capsule.

Returning to the bite of sub-freezing temperatures and a foot of snow, all three were carried to nearby recliners and bundled in blankets for initial medical checks, traditional fresh fruit and satellite phone calls home to family and friends.

No stranger to cold weather, Koch spent multiple winters in Antarctica and Greenland as a research engineer with Johns Hopkins University and the national Oceanic and Atmospheric Administration before joining NASA’s astronaut corps in 2013. But the veteran surfer said before leaving the station that she was most looking forward to a walk on the beach back home in south Texas.

“I live near the beach and I absolutely love the water, so hopefully going for a swim or a surf or just walking my dog on the beach, feeling the sand, feeling the wind,” she said. “Those are things that you can’t really replicate up here, so I can’t wait to be out in nature.”

From the landing site, all three crew members were be flown by helicopter to Karaganda. From there, Skvortsov will take a Russian jet back to Star City near Moscow while Koch and Parmitano fly on to Cologne, Germany, aboard a NASA plane. Parmitano will get off there and Koch will continue on to Houston for debriefing and rehabilitation.

“Everyone says that getting back into gravity is such a surprise because you suddenly have to actually work to raise your own arms and of course your legs,” Koch said. “So I think that will be definitely something to get used to. I haven’t had to hold up even my own body weight in a long time, so we’ll see how that goes.”

For Skvortsov and Parmitano, launched from the Baikonur Cosmodrome on July 20, landing closed out a voyage spanning 200 days 16 hours and 44 minutes, covering 3,216 orbits and 85.2 million miles. Including two earlier station visits, Skvortsov’s total time in space now stands at 546 days while Parmitano’s total over two flights is 367 days.

Koch was launched to the station in March and was already on board when Skvortsov and Parmitano arrived. With landing Thursday, her time off planet stands at 328 days 13 hours and 58 minutes, the longest single flight by a female astronaut or cosmonaut.

Her voyage covered 5,248 orbits and 139 million miles and was just 12 days short of the U.S. single-flight endurance record set by former astronaut Scott Kelly. She now ranks No. 7 on the list of most experienced NASA astronauts and 50th in the world.

During her stay aboard the station, Koch participated in six spacewalks totaling 42 hours and 15 minutes. She and Meir carried out the first all-female spacewalk last Oct. 18, replacing a faulty solar array battery charge controller, and two more on Jan. 15 and 20 to complete work started last year to replace a set of solar array batteries.

During their historic first spacewalk together, “we caught each other’s eye and we knew that we were really honored with this opportunity to inspire so many,” Koch said in a NASA interview. “And just hearing our voices talk to mission control, knowing two female voices had never been on the (audio) loops, solving those problems together outside, it was a really special feeling.”

When the departure of Koch and her crewmates, Skripochka, Meir and Morgan will have the space station to themselves until April 9 when three fresh crew members — NASA’s Chris Cassidy and cosmonauts Nikolai Tikhonov and Andrei Babkin — arrive aboard the Soyuz MS-16/62S spacecraft.

After an eight-day handover, Skripochka, Meir and Morgan will return to Earth to close out a 204-day mission. From that point forward, the station will be staffed by just three crew members, two Russians and one American, until new commercial crew ships built by SpaceX and Boeing begin crew rotation flights later this year. 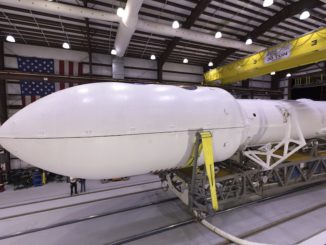 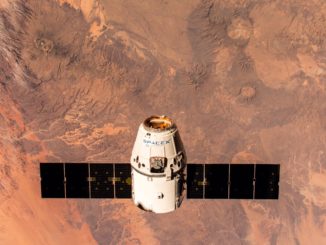 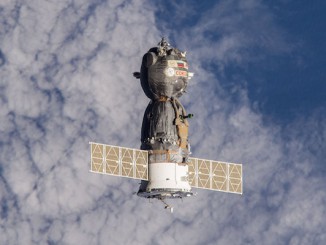