The 81st flight of a United Launch Alliance Atlas 5 rocket, set for liftoff Friday from Cape Canaveral, will come with its share of firsts when it sends Boeing’s Starliner crew capsule toward the International Space Station on an unpiloted test flight.

The launcher will fly without a payload shroud, which typically envelopes satellites during liftoff, and it will debut an uprated dual-engine Centaur upper stage that will power the Starliner on a unique suborbital trajectory optimized for astronaut comfort.

The new version of the Atlas 5 stands 172 feet (52.4 meters) tall. ULA even has a new designation for the Atlas 5 version designed for Starliner missions: N22, meaning no payload fairing, two solid rocket boosters, and a two-engine Centaur upper stage.

On top of the rocket sits Boeing’s Starliner capsule, which measures 15 feet (nearly 4.6 meters), slightly wider than the Apollo command module. The Starliner’s Orbital Flight Test set for launch Friday will be a demonstration of the capsule’s performance before NASA and Boeing put astronauts on the next mission to the space station.

A test dummy named “Rosie” is seated inside the Starliner crew cabin to collect data on the environments future astronauts will see in flight.

NASA has signed agreements with Boeing since 2010, valued at near $5 billion, to fund development of the Starliner spacecraft. The space agency has similar contracts with SpaceX to develop the Crew Dragon spacecraft, which completed its first unpiloted trip to the space station in March, and is due to begin flights with astronauts in early 2020.

After filling the Atlas 5 with liquid hydrogen and liquid oxygen propellants — kerosene for the first stage is already loaded on-board — ULA’s launch team will be polled in the final minutes before liftoff. If all systems are go, the countdown clock will resume at T-minus 4 minutes and tick down down to liftoff.

The Atlas 5’s Russian-made RD-180 main engine will ignite and throttle up to full power to produce 860,000 pounds of thrust, then the rocket’s two solid-fueled will fire to propel the launcher off pad 41.

Turning northeast to align itself with the space station’s orbital pathway, the Atlas 5 will surpass the speed of sound in 66 seconds. The twin solid rocket boosters, produced by Aerojet Rocketdyne, will burn for more than 90 seconds to give extra burst of energy during the Atlas 5’s initial climb away from Cape Canaveral. The booster casings will jettison at T+plus 2 minutes, 22 seconds, to fall into the Atlantic Ocean.

The RD-180 engine, responding to commands from the Atlas 5’s guidance computer, will throttle down to limit acceleration on the Starliner spacecraft to around 3.5Gs as the rocket becomes lighter from the consumption of liquid propellants.

The launch of the Starliner spacecraft is the first Atlas 5 mission to use a dual-engine Centaur upper stage. All 80 previous Atlas 5s flew with single-engine Centaur variants.

The dual-engine Centaur stage previously flew more than 100 times on earlier Atlas rocket variants, most recently in 2004. Of the 251 missions flown with Centaur stages since 1962, 166 utilized the Centaur’s dual-engine configuration.

The RL10 engines on the Centaur will consume super-cold liquid hydrogen and liquid oxygen, cumulatively generating nearly 45,000 pounds of thrust.

“That extra engine does provide the additional thrust to lift that heavy payload to LEO (low Earth orbit),” said Caleb Weiss, ULA’s mission manager for the Starliner program. “It also lets us also let this fly as shallower trajectory, which is more favorable if we had to ever have an abort with the crew on there. So that additional trust lets us design the trajectory in a way that is that optimizes the safety of the crew.”

The shallow trajectory will reduce g-forces on Starliner astronauts on future missions, and helps ensure the crew capsule can safely abort at any point in the launch sequence. The flattened ascent profile also would keep the Starliner spacecraft from splashing down in “blackout zones” in the North Atlantic Ocean, enabling aborts closer to shore near Canada or Ireland.

But the Starliner’s launch abort engines will not be active on the unpiloted Orbital Flight Test. Engineers want to be sure they have appropriately set abort “triggers” in the Emergency Detection System, a computer on the Atlas 5 that will monitor key parameters during launch and command an abort to push the Starliner away from the rocket in the event of a dangerous condition.

For more details on the Emergency Detection System and the Starliner abort system, read our earlier story.

Ground test abort engine units are flying on the Starliner for Friday’s launch.

Early in the Centaur’s burn Friday, at T+plus 5 minutes, 5 seconds, an aerodynamic skirt at the base of the Starliner spacecraft will release and fall away.

ULA and Boeing developed a design fix in 2016 to address aerodynamic problems discovered during wind tunnel testing. The 70-inch-long (1.8-meter) aeroskirt extension is installed on top of the Centaur upper stage, where it will be positioned against the bottom of the Starliner spacecraft during launch.

“We did have quite a bit of analysis that was done early on in the program, wind tunnel testing, and what that showed us was that really get optimal stability on the vehicle, we wanted to extend the aerodynamic surface of the spacecraft further aft and that’s where we came up with the 70-inch aeroskirt, “Weiss said in an interview with Spaceflight Now.

John Elbon, ULA’s chief operating officer and a former Starliner manager at Boeing, said the wind tunnel testing indicated that aerodynamic shock waves from the Starliner spacecraft as it plows through the atmosphere would attach near the base of the Centaur upper stage. That would have created “quite a bit of aero-acoustic noise there,” he said.

“The environments that existed were beyond what the hardware was qualified for, so by adding the aeroskirt, it smoothed that flow,” Elbon said. “We don’t get that acoustic noise, and we’re in good shape.”

“So once we incorporated that change, we went back and did additional wind tunnel testing, and all that came back with an improvement — you can improve the aerodynamics and improve the stability, overall stability of the vehicle,” Weiss said.

The Centaur upper stage’s propellant tanks have to be kept pressurized to maintain their shape, with ultra-thin stainless steel skin just 0.02 inches — half a millimeter — thick. The thin tank walls allow the Centaur to achieve great efficiencies in flight, thanks to its low weight.

The Atlas 5’s new aeroskirt is no longer needed once the rocket climbs above the thick, lower layers of the atmosphere, and is jettisoned in two halves.

The Centaur upper stage’s RL10 engines will fire more than seven minutes to propel the Starliner spacecraft to a velocity just shy of that needed to enter a stable orbit around Earth. The suborbital trajectory is a consequence of the shallow, crew-friendly launch profile.

The Centaur guidance system will target a trajectory ranging between 112 miles (181 kilometers) and 44 miles (72 kilometers) in altitude, at an inclination of 51.6 degrees to the equator. The 44-mile-high perigee, or low point, of the suborbital trajectory is inside Earth’s atmosphere, meaning the Starliner would re-enter the atmosphere and come back to Earth without an additional propulsive maneuver.

After separating from the rocket, the Starliner’s own orbital maneuver and attitude control engines, mounted on the ship’s service module, will boost the spacecraft into orbit to begin the trek to the International Space Station. The burn is expected to last around 40 seconds, and will begin around 31 minutes after liftoff.

Meanwhile, the Centaur upper stage will continue on an arcing suborbital path before a destructive re-entry over the Indian Ocean southwest of Australia.

The suborbital trajectory is unusual for a satellite launch, but it is similar to the technique used by the space shuttle. The shuttle’s three main engines, fed by cryogenic propellants from an external fuel tank, accelerated the orbiter into space, reaching a velocity just short of that required to enter orbit.

After jettisoning the expendable external tank, the shuttles fired their in-space maneuvering engines around a half-hour after launch to enter orbit. Otherwise, the shuttles would have cut short their missions and re-entered the atmosphere.

The Starliner will follow a similar launch profile on the OFT mission, and on the subsequent crewed flights.

Flight controllers at NASA’s Johnson Space Center in Houston will take over oversight of the Starliner mission for the capsule’s trek to the space station.

The Starliner will perform a series of demonstration burns on the way to the space station to verify the ship’s thrusters, computers, and navigation and control systems are ready to approach the orbiting research complex with its six-person crew.

Cargo vehicles flying to the space station are typically captured by the research lab’s robotic arm once they move within range. But the Starliner, and SpaceX’s Crew Dragon, are designed to dock, similar to the way space shuttles linked up to the space station.

The Starliner will remain attached to the station until late Dec. 27, when it will undock and begin maneuvers to head for an parachute-assisted, airbag-cushioned predawn landing at White Sands Space Harbor in New Mexico.

The reusable capsule is scheduled to land at White Stands at 5:48 a.m. EST (3:48 a.m. MST; 1048 GMT) on Dec. 28. Boeing teams will return the spaceship to the Kennedy Space Center for refurbishment ahead of its next flight — the second crewed mission to the International Space Station.

Regular crew rotation missions to the station will begin after the Crew Flight Test. Boeing has a contract for at least six crew ferry flights through 2024. 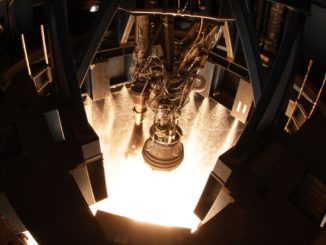 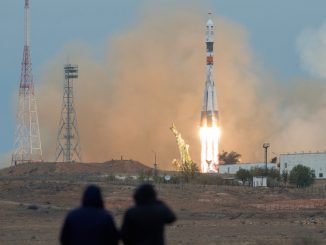 Soyuz crew blasts off from Kazakhstan 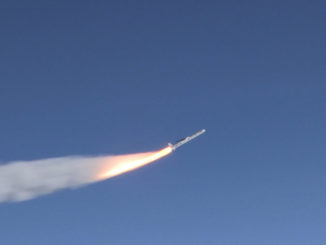