An unpiloted Russian Soyuz spacecraft, with a humanoid robot in the commander’s seat instead of a cosmonaut, is scheduled for liftoff late Wednesday (U.S. time) from Kazakhstan on a test flight to verify the spaceship’s compatibility with the new-generation Soyuz-2.1a rocket set to begin launching crews to the International Space Station next year.

The Soyuz MS-14 spacecraft will be the first Soyuz ship to fly without a cosmonaut crew in 33 years. Officials from Roscosmos, the Russian space agency, decided to conduct the unpiloted launch as a full-up test flight of the Soyuz-2.1a rocket with the Soyuz spacecraft.

The Soyuz-2.1a rocket variant has launched dozens of times since 2004, including ten flights with Progress cargo freighters on missions to resupply the space station.

The 2015 Progress accident prompted Russian officials to fly the first Soyuz crew capsule on a Soyuz-2.1a rocket without people aboard.

The Soyuz-FG variant currently used to launch Soyuz crews to the space station is set for retirement later this year.

One more Soyuz-FG rocket remains in Russia’s inventory, and it is scheduled to launch Sept. 25 carrying the Soyuz MS-15 spacecraft into orbit with commander Oleg Skripochka, NASA co-pilot Jessica Meir and flight engineer Hazzaa Ali Almansoori, set to become the first person from the United Arab Emirates to fly in space.

The Sept. 25 launch of the Soyuz MS-15 spacecraft is the final planned mission to lift off from Site 1 at Baikonur, the same facility used on the launch of Yuri Gagarin on humanity’s first orbital flight in April 1961.

Beginning next March, Soyuz crews will launch on Soyuz-2.1a boosters from Site 31 at Baikonur, which is outfitted for the upgraded Soyuz-2 family.

After launching from Kazakhstan, the Soyuz MS-14 spacecraft will raise its altitude and match its orbit with the space station, setting up for a docking with the Poisk module at 0530 GMT (1:30 a.m. EDT) Saturday.

Instead of a crew, the Soyuz MS-14 spaceship will haul 1,450 pounds (657 kilograms) of cargo to the space station, including the Russian Skybot F-850 robot, a two-legged, two-armed humanoid stand-in for a cosmonaut commander.

The Skybot F-850 will not manipulate any flight controls during the Soyuz mission, but sensors on the robot’s body will measure key environmental parameters during the flight, including launch, docking and landing.

Russian cosmonaut Alexander Skvortsov will work with Skybot F-850 after it arrives at the station. Skvortsov will be able to communicate with the robot, according to Roscosmos.

Skybot F-850 will copy the movements of Skvortsov during a series of tests in orbit. If the tests are successful, Russia could launch upgraded robots that could work outside the space station, helping crews with tasks on spacewalks, or allowing cosmonauts to avoid spacewalks altogether, Bloshenko said.

The Russian Foundation for Advanced Research Projects, with a role similar to DARPA in the U.S. government, led the development of the FEDOR robot.

Skybot F-850 is not the first robot to travel to the space station.

NASA’s experimental Robonaut 2 robot launched to the station in 2011, but the robot returned to Earth last year in need of repairs. Robonaut 2 could return to the space station later this year.

Roscosmos created a Twitter account for the Russian robot set to fly to the station, complete with tweets composed from Skybot F-850’s point-of-view.

In one tweet, it wrote that conditions inside the Soyuz MS-14 spacecraft were tight. The robot can “barely fit among the cargo in the cabin” of the spaceship, the tweet said. 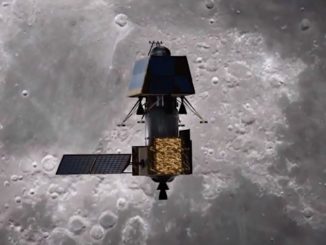 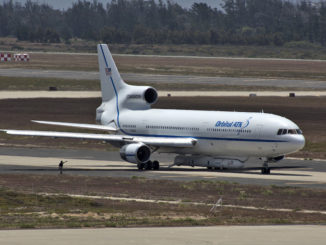 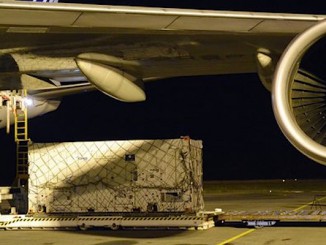