A new Russian weather satellite, a CubeSat to test a Silicon Valley startup’s water-based propulsion system, and eight more members of Spire’s commercial fleet of nanosatellites were among 33 spacecraft that rode a Soyuz rocket into orbit Friday from Russia’s Far East.

Heading north from Vostochny, the Soyuz-2.1b rocket gave the 33 satellites a ride to space in the first 10 minutes of the mission, then deployed a Fregat upper stage to conduct a series in burns to inject the payloads into three distinct near-polar orbits at different altitudes.

Around five hours later, an update by Roscosmos — the Russian space agency — confirmed all 33 of the satellites separated from the Fregat upper stage, and officials declared the mission a success.

The Meteor M2-2 satellite, the mission’s prime payload, is owned by the Russian government. The Fregat upper stage released the 6,393-pound (2,900-kilogram) around an hour after launch in an orbit more than 500 miles (800 kilometers) above Earth, with an inclination of about 98.6 degrees to the equator.

Then the rocket went on to release 32 secondary payloads for owners in Russia, Germany, France, the United States, the United Kingdom, Israel, Sweden, Finland, Thailand, Ecuador, Estonia and the Czech Republic.

Glavkosmos and its subsidiary GK Launch Services — state-owned companies responsible for marketing Russian space products and services internationally — arranged the launch of 29 of the secondary payloads on Friday’s mission. Another three CubeSats came from Russian universities, with their launch costs picked up by Roscosmos.

The German launches services provider Exolaunch brokered a ride for 28 of the small satellites with Glavkosmos.

After separation of the Meteor M2-2 weather satellite, the Fregat upper stage fired several more times to lower its orbit. Another batch of payloads separated in a targeted 360-mile-high (580-kilometer) orbit with an inclination of 97.7 degrees, followed a final deployment sequence in a targeted 329-mile-high (530-kilometer) orbit inclined 97.5 degrees to the equator, according to Roscosmos.

The Meteor M2-2 satellite, designed for a five-year mission, hosts four meteorological instruments: two multi-channel scanners and cameras to obtain infrared and visible images of clouds and ice cover, a microwave radiometer to measure temperature and humidity in the atmosphere, and an infrared spectrometer to monitor the ozone layer.

Built by VNIIEM, a Moscow-based aerospace contractor, the Meteor M2-2 satellite also carries a search-and-rescue radio transponder and a payload to relay data from remote weather stations and offshore buoys to Russian forecasters.

The launch of the Meteor M2-2 spacecraft comes a year-and-a-half after the last satellite in the Russian Meteor series, designated Meteor M2-1, was lost due to a programming error in the Soyuz rocket’s Fregat upper stage that prevented the mission from reaching orbit following a liftoff from Vostochny.

Several of the CubeSat secondary payloads on Friday’s launch are also replacements for the satellites lost in the same 2017 launch failure.

One of the rideshare satellites launched Friday is owned by a Silicon Valley-based company named Momentus, which is developing a line of Vigoride orbital transfer vehicles that are designed to ferry CubeSats and other small payloads from low Earth orbit to higher altitudes.

“On this mission we will be the first to fly a microwave electrothermal plasma rocket in space to prove the technical feasibility of our high performance water rockets,” wrote Joel Sercel, chief technology officer at Momentus, in an updated on the company’s website.

The El Camino Real spacecraft is about the size of a suitcase.

“We will be flying our technology demonstration of water based microwave electrothermal propulsion on a CubeSat even though the in space rockets, or orbit transfer vehicles, we are building are bigger than that and can carry many CubeSats on a single mission,” Sercel wrote. “El Camino Real is flying on a CubeSat because it is the most cost effective way to do this key technology demonstration.”

Two of the biggest satellites launched as rideshare payloads Friday are radar observation spacecraft developed by ICEYE, a Finnish company that is pioneering the use of microsatellites — each weighing less than 200 pounds — to collect radar imagery of Earth.

Imaging radars used to be relegated to bigger satellites that could generate more electricity from solar panels to feed the power-hungry instruments. But ICEYE’s miniaturized X-band radar sensor fits on a smaller spacecraft, opening up the possibility of building and launching a relatively inexpensive fleet of radar satellites, which can take images of Earth’s surface day-and-night, and in all weather conditions.

“ICEYE’s SAR (synthetic aperture radar) satellites don’t take years to develop and launch. We are on a faster time scale to serve data to our partners. I’m very proud of our team,” said Rafal Modrzewski, CEO and co-founder of ICEYE. “Both government and commercial customers have access to a growing SAR satellite capacity from ICEYE. We’re well on our way to providing imaging from these two new units, and we look forward to our upcoming launches still scheduled for later this year.”

ICEYE launched its first two satellites last year, and the company said it is on track to launch a total of five missions this year.

Eight Lemur-2 CubeSats from Spire Global, a San Franciso-based company, are also launched Friday. The Lemur-2 CubeSats will add to Spire’s fleet of more than 70 active nanosatellites tracking ships and collecting atmospheric data that could one day improve the accuracy of weather prediction models.

Two of Spire’s new shoebox-sized CubeSats, built at the company’s manufacturing facility in Glasgow, Scotland, will demonstrate new supercomputing capabilities that “will be able to process and cherry-pick data from other satellites in orbit before transmitting it to Earth, optimizing and freeing up bandwidth for other tasks and users,” said the UK Space Agency, which is supporting the experiment with Spire and the European Space Agency.

An Israeli startup named NSLComm launched its first test satellite, a six-unit suitcase-sized CubeSat built by ÅAC Clyde Space in Scotland, on Friday’s Soyuz flight. The NSLSat 1 mission will test an expandable, reconfigurable antenna that will launch in a stowed configuration and then unfurl once the CubeSat is in orbit.

NSLComm plans to build a fleet of smallsats to provide global broadband Internet coverage. The Israeli company says its fabric-like antenna design will support up to 100 times the throughput possible with existing CubeSat technology.

Three CubeSats developed by German Orbital Systems are also hitched a ride to space on the Soyuz rocket. One of the CubeSats, named JAISAT 1, will serve the Thai amateur radio community, and the other two — named EXOCONNECT and D-Star One, or LightSat — will allow German Orbital Systems to test its own satellite technology in orbit, according to information provided by Exolaunch.

Beesat 9 is a one-unit cube-shaped CubeSat designed to test an attitude control system. The other four Beesats are even smaller, weighing about 330 grams (0.72 pounds) each, and will conduct experiments with a UHF communications system for inter-satellite radio links, a stepping stone toward more capable swarms of tiny satellites that can work together in orbit.

Other universities in Germany, Estonia, Ecuador, France and Sweden had CubeSats on Friday’s mission.

The German student-built MOVE 2b and SONATE CubeSats come from Technical University of Munich and the University of Wuerzburg, respectively. The TTU101 CubeSat from the Tallinn University of Technology in Estonia carries an Earth observation camera and an X-band telemetry system, according to Exolaunch.

Students at Universidad Tecnológica Equinoccial in Ecuador assembled the Ecuador-UTE CubeSat with sensors designed to monitor space weather and the ionosphere, a layer in Earth’s upper atmosphere where auroras are generated.

The SEAM 2.0 mission, led by Sweden’s KTH Royal Institute of Technology, will also conduct measurements of magnetic and electric fields in the ionosphere, a layer in Earth’s upper atmosphere where auroras are generated. The SEAM spacecraft is also a pathfinder for the design of future small-scale European science missions.

The MTCube nanosatellite from the University of Montpellier in France will test the response of commercially-available components to the radiation environment of space.

A CubeSat named Lucky 7 from SkyFox Labs in the Czech Republic also launched Friday, along with a small technology demonstration satellite from SSTL, a British small satellite manufacturer.

Friday’s mission was the fifth launch from Vostochny since the Soyuz launch pad became operational in 2016. Russia built the new spaceport to eventually replace the Baikonur Cosmodrome in Kazakhstan, and officials plan to eventually transfer crew launches to Vostochny and are building a new launch pad there for the Russian Angara heavy-lift rocket.

But the site is currently only equipped for satellite launches using Soyuz rockets.

The launch Friday was the seventh flight of a Soyuz booster this year, including missions launched from Vostochny, the Baikonur Cosmodrome in Kazakhstan, the Plesetsk Cosmodrome in northern Russia, and the European-run Guiana Space Center in South America. 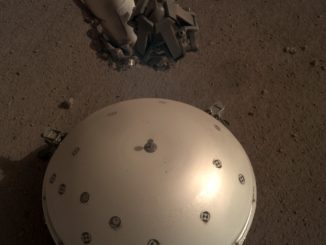 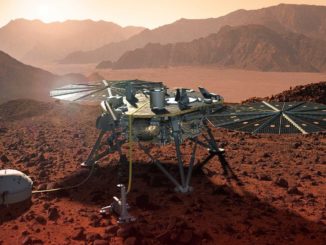 All systems go for launch of InSight, a mission to reveal the inside of Mars 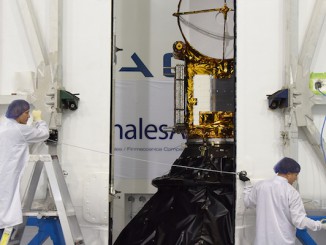