SpaceX founder and chief executive Elon Musk said Thursday that the company’s recovery fleet in the Atlantic Ocean recovered the two halves of the Falcon Heavy’s payload shroud after the heavy-lifter’s second launch from the Kennedy Space Center. Musk said the company plans to reuse the fairing for the first time later this year.

In a series of tweets Thursday night, Musk wrote SpaceX retrieved both halves of the Falcon Heavy’s payload shroud from the sea, and the hardware appears undamaged after riding to the edge of space and back.

Musk said the fairing halves will launch again later this year on a mission carrying a batch of satellites into orbit for SpaceX’s Starlink global broadband network. Two Starlink test satellites launched last year, and SpaceX’s next set of Earth-orbiting broadband relay spacecraft are scheduled for launch on a Falcon 9 rocket from Florida in the coming months, according to regulatory filings.

Both fairing halves recovered. Will be flown on Starlink 💫 mission later this year. pic.twitter.com/ouz1aqW3Mm

On several missions since early 2018, SpaceX has tried to catch the payload fairings using a giant net on a ship named Mr. Steven, which tried to maneuver under the fairing as it descended under a steerable parachute. After several near-misses, SpaceX installed a bigger net on the vessel, but the company has not yet snatched a fairing using the ship.

SpaceX has recovered numerous fairings from the ocean. The concept of catching the fairing with Mr. Steven was intended to keep the hardware from being damaged by salt water. SpaceX’s experience with refurbishing Dragon cargo capsules that splash down at sea has shown the effort to be time-consuming.

In recent months, Musk has said cleaning fairings recovered from the ocean may not be a show-stopper to reusing the shroud.

After Mr. Steven narrowly missed catching a fairing after a Falcon 9 launch from California in December, Musk tweeted: “Falcon fairing halves missed the net, but touched down softly in the water. Mr. Steven is picking them up. Plan is to dry them out & launch again. Nothing wrong with a little swim.”

Mr. Steven sailed from California through the Panama Canal to Florida earlier this year, but was not deployed to catch the fairing Thursday.

Musk said Thursday night that the fairing halves from the Falcon Heavy launch Thursday will be the first to be re-flown.

The payload fairing typically jettisons from the rocket three or four minutes after liftoff, once the launcher has climbed into space. The aerodynamic shroud, or nose cone, shields satellite payloads from the airflow as the rocket ascends through the dense lower layers of the atmosphere.

Once in the vacuum of space, the fairing is no longer needed. It separates in two pieces, like a clamshell, and falls back to Earth.

SpaceX has outfitted its fairings with avionics, thrusters and steerable parachutes to aid recovery. The company wants to reuse the fairing, eyeing it as the next step in reducing launch costs after proving the landing and reuse of Falcon booster stages. 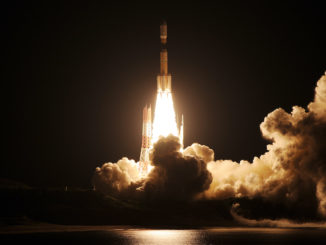 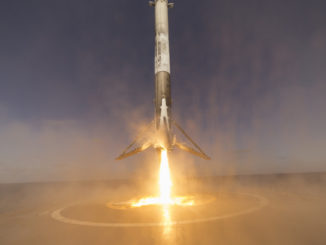 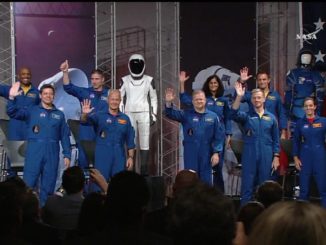