With SpaceX’s first Crew Dragon spacecraft back on Earth after a successful six-day test flight to the International Space Station, the company’s next mission will mark the return of the Falcon Heavy, the world’s most powerful launcher, comprised of three Falcon 9 boosters and 27 Merlin main engines to generate more than 5.1 million pounds of thrust at liftoff.

Workers at pad 39A are outfitting a transporter/erector for the Falcon Heavy mission after the structure supported a series of Falcon 9 launches over the last 13 months.

Since the Falcon Heavy’s first flight in February 2018, SpaceX has debuted a new version of the Falcon 9 rocket known as the Block 5, featuring more lift capacity, a beefed-up heat shield and other changes to make the launcher more reliable and easier to reuse, according to SpaceX officials.

Officials have not announced a launch date for the Falcon Heavy’s next mission, but multiple officials suggested to Spaceflight Now the flight is scheduled to take off in the first week of April from launch pad 39A at NASA’s Kennedy Space Center in Florida. CNBC reported Friday the launch is targeted for no earlier than April 7 at 6:36 p.m. EDT (2236 GMT).

The payload slated to ride the Falcon Heavy into orbit is Arabsat 6A, a powerhouse communications satellite designed to deliver television, Internet and mobile phone services across the Middle East, Africa and Europe. The spacecraft was built by Lockheed Martin and delivered to Cape Canaveral in January for fueling and final pre-launch processing.

Owned by Arabsat, a satellite operator based in Saudi Arabia, the new telecom relay station will be parked in geostationary orbit more than 22,000 miles (nearly 36,000 kilometers) over the equator at 30.5 degrees east longitude.

Like the Falcon Heavy’s first flight last year, the rocket’s two side boosters will jettison from the center core stage around two-and-a-half minutes after liftoff, flip around and reignite their engines to head back to Florida, targeting nearly simultaneous touchdowns at SpaceX’s landing zone a few miles south of pad 39A.

The Falcon Heavy’s center core stage will attempt a landing on SpaceX’s drone ship in the Atlantic Ocean east of Florida. The core stage on the Falcon Heavy’s inaugural launch last year crashed in the sea near the recovery vessel, but the rocket delivered its payload — a Tesla Roadster with a spacesuit-clad mannequin in the driver’s seat — on a trajectory to escape the gravitational bonds of Earth and roam the solar system.

For commercial and military customers, the Falcon Heavy’s extra lift capability will allow SpaceX to place payloads such as broadcasting satellites closer to their final positions in geostationary orbit. On three launches last year, SpaceX used Falcon 9 rockets to place communications satellites for Telesat and Telkom Indonesia into elliptical transfer orbits with apogees, or high points, below the geostationary belt.

By targeting a “sub-synchronous” transfer orbit, the Falcon 9 could set aside enough fuel to land its first stage, leaving the satellites themselves to conduct additional maneuvers to reach their operating positions. In the case of Telesat’s Telstar 18 VANTAGE and Telstar 19 VANTAGE satellites, ground crews loaded extra fuel into the spacecraft to accomplish the orbit-raising maneuvers. With the additional fuel load, the Telstar 19 VANTAGE spacecraft, which rode a Falcon 9 into orbit last July, became the heaviest commercial communications satellite ever launched.

Hans Koenigsmann, SpaceX’s vice president of build and flight reliability, outlined the Falcon 9 and Falcon Heavy performance metrics during a presentation in October at the International Astronautical Congress in Germany. All the figures below assume a payload deployment into a reference geostationary transfer orbit ranging from 115 miles (185 kilometers) to 22,236 miles (35,786 kilometers) in altitude, with an inclination of 27 degrees to the equator. If a satellite is released into such an orbit, it must use its on-board propulsion to provide an extra 4,000 mph (1,800 meters per second) of velocity to reach a circular geostationary orbit roughly 22,000 miles over the equator.

Here are the performance numbers provided by Koenigsmann for the Falcon 9 and Falcon Heavy rockets to such an orbit, with variables introduced for different booster landing scenarios.

SpaceX retired the Falcon Heavy side boosters that launched and landed on last year’s inaugural mission, but the Arabsat 6A flight will launch with new Block 5 boosters, giving engineers the opportunity to more easily recover and refurbish the rockets for the following Falcon Heavy flight, currently scheduled no earlier than June.

That mission is sponsored by the Air Force’s Space Test Program, and is set to carry roughly two dozen spacecraft into orbit, releasing the satellites at different altitudes and inclinations using multiple firings by the Falcon Heavy’s second stage engine. The satellites are primarily designed for scientific observations and technology demonstrations.

The long-delayed rideshare mission is known as STP-2, and SpaceX has had the launch in its backlog since 2012. Delays in developing and certifying the Falcon Heavy have delayed the STP-2 launch from its original target date in 2015.

Some of the satellites assigned to the STP-2 launch host NASA experiments. Nicky Fox, the head of NASA’s heliophysics division, said in December that SpaceX intended to reuse the side boosters from the Arabsat 6A mission for STP-2.

An Air Force spokesperson this week confirmed the agreement to use previously-flown side boosters for the STP-2 mission. The center core will be new for the Arabsat 6A and STP-2 launches.

“This provides an early opportunity for the Air Force to understand the process for using previously-flown hardware with the goal to open future EELV missions to reusable launch vehicles,” the spokesperson said in response to an inquiry from Spaceflight Now.

Since the Pentagon began awarding launch contracts to SpaceX, the Air Force has not agreed to launch any of the military’s most vital payloads, such as secure communications, early warning, reconnaissance and navigation satellites, using a previously-flown booster. The STP-2 mission is a lower-priority launch for the Air Force.

A GPS navigation satellite launch in December marked SpaceX’s first mission carrying a payload in the Air Force’s uppermost tier of space missions, for which military officials require insight and oversight over what commercial satellite operators would receive on a typical launch. 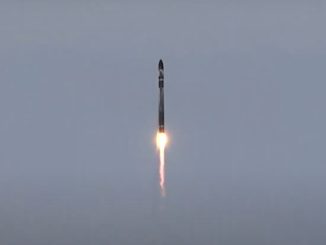 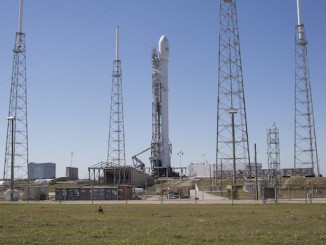 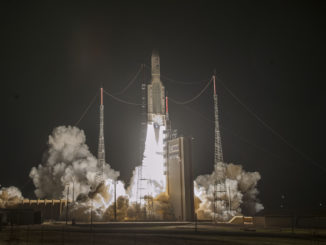