Two communications satellites owned by Saudi Arabian and Indian operators rocketed into orbit Tuesday on top of a European Ariane 5 rocket, the first of up to 13 launches planned from French Guiana this year.

Vaulting into a hazy, overcast evening sky with 2.9 million pounds of thrust, the Ariane 5 headed east from the European-run spaceport in South America, surpassed the speed of sound in less than a minute, and released its two side-mounted solid-fueled boosters around two-and-a-half minutes after liftoff.

Moments later, the Ariane 5’s payload shroud — made by Ruag in Switzerland — jettisoned to fall into the Atlantic Ocean, and the core stage engine shut down and separated nearly nine minutes into the flight. An upper stage HM7B engine fired more than 16 minutes to accelerate the Hellas-Sat 4/Saudi Geostationary Satellite 1 and GSAT 31 communications satellites into an elliptical geostationary transfer orbit ranging between 155 miles (250 kilometers) and 22,236 miles (35,786 kilometers) in altitude.

The Ariane 5 deployed the satellites one at a time, first releasing Hellas-Sat 4/SGS 1, then ejecting an adapter cover for separation of the GSAT 31 communications satellite more than 42 minutes after liftoff.

Each satellite will use on-board thrusters to circularize their orbits more than 22,000 miles over the equator, where their velocities will match the rate of Earth’s rotation, giving the spacecraft fixed coverage zones, with Hellas-Sat 4/SGS 1 covering the Middle East, Europe and Africa, and GSAT 31 over India and the Indian Ocean.

Arianespace, the French company responsible for launch activities at the Guiana Space Center, declared the launch a success, wrapping up the 103rd Ariane 5 flight since 1996, and the first this year.

The bigger of the two satellites launching Tuesday is a multi-use craft for King Abdulaziz City for Science and Technology, or KACST, a government research institute in Riyadh, Saudi Arabia, and Hellas-Sat, a subsidiary of Arabsat headquartered in Cyprus.

Known by KACST and Hellas-Sat as Saudi Geostationary Satellite 1 and Hellas-Sat 4, respectively, the satellite was built by Lockheed Martin in Denver, then shipped to the defense contractor’s facility in Sunnyvale, California, for environmental testing before flying to French Guiana aboard a cargo plane in preparation for launch.

The Hellas-Sat 4/SGS 1 spacecraft is Lockheed Martin’s first commercial geostationary satellite to launch since 2012, representing the company’s return to the commercial market after a long emphasis on building satellites for the U.S. government.

Another Saudi-owend communications craft based on Lockheed Martin’s modernized A2100 spacecraft bus — Arabsat 6A — is scheduled for launch as soon as March aboard a SpaceX Falcon Heavy rocket from NASA’s Kennedy Space Center in Florida.

The Hellas-Sat 4/SGS 1 spacecraft weighs 14,319 pounds (6,495 kilograms) fully fueled for launch, and it will ride in the upper position inside the Ariane 5 rocket’s Swiss-made payload fairing. On-board thrusters will raise the satellite’s orbit from the elliptical transfer orbit reachable by the Ariane 5, to a circular position at geostationary altitude over the equator at 39 degrees east longitude.

Designed for a lifetime of more than 15 years, Hellas-Sat 4/SGS 1 will provide Ka-band broadband Internet connectivity and other telecom services across Saudi Arabia and neighboring countries, including secure military communications for nations in the Gulf Cooperative Council, a group composed of Saudi Arabia, Bahrain, Kuwait, Oman, and the United Arab Emirates.

The satellite’s Ku-band payload will be used by Hellas-Sat to beam direct-to-home television programming to parts of Europe, Africa and the Middle East.

“The Saudi Geostationary Satellite, SGS1, is a national satellite providing secure satellite communications in Ka-band for the government of Saudi Arabia,” said Badr Alsuwaidan, SGS 1 program director at KACST. “It provides 35 gigabits per second. It has coverage of the Middle East, Europe and North Africa, as well as a Ku-band payload for the Hellas-Sat subsidiary of Arabsat. SGS1 is a satellite that comes from the alliance, or the agreement, of KACST and Arabsat, who jointly contracted with Lockheed Martin to build geostationary satellites.”

Lockheed Martin also trained 15 Saudi engineers during the manufacturing of Hellas-Sat 4/SGS 1 as part of a transfer of know-how under company’s contract with KACST.

“The launch of Hellas-Sat 4 will increase our geostationary fleet to a number of three satellites,” said Kandeas Karantonis, Hellas-Sat 4 program manager at Hellas-Sat. “The Hellas-Sat payload will provide Ku coverage over Europe, the Middle East and South Africa. It will provide extensive redundancy and backup capacities to further secure DTH (direct-to-home) networks and customer base and provide competitive advantages to customers in Europe and other areas.

“We envision Hellas-Sat 4 to provide additional capacities for HD, 4K and free-to-air channels which will guarantee additional room for our existing and new customers to grow,” Karantonis said.

India’s GSAT 31 communications satellite will ride into orbit inside a Sylda dual-payload structure in the lower position in the Ariane 5’s payload fairing.

The 5,590-pound (2,536-kilogram) satellite will maneuver into a geostationary orbital slot at 48 degrees east longitude for its planned 15-year mission providing Ku-band services to India and neighboring islands and oceans.

GSAT 31 will support communications networks, broadcast television programming, and provide cellular backhaul connectivity across its coverage zone, according to the Indian Space Research Organization, which built and owns the spacecraft.

This year, Arianespace officials foresee up to five Ariane 5 flights, each with two satellites heading for geostationary orbit more than 22,000 miles (nearly 35,000 kilometers) over the equator. There are up to five Vega launches on this year’s schedule at the Guiana Space Center — four using the current variant, plus the debut launch of the Vega-C rocket at the end of the year with enlarged solid-fueled booster stages.

Three Soyuz launches are scheduled this year from French Guiana — one with the first six satellites for OneWeb’s broadband network, another with four more O3b high-speed Internet satellites, and a mission late this year with an Italian radar observation craft and a European Space Agency telescope to study planets around other stars.

That brings the total number of flights planned at the Guiana Space Center this year to 13. One more Soyuz launch could take off this year from the Baikonur Cosmodrome in Kazakhstan with another batch of OneWeb satellites, also through a contract with Arianespace.

Arianespace’s launch schedule this year — if achieved — would set a record for the most missions in a calendar year in the company’s history. It would also mark the highest number of Vega rocket launches in a year since that vehicle flew for the first time in 2012. 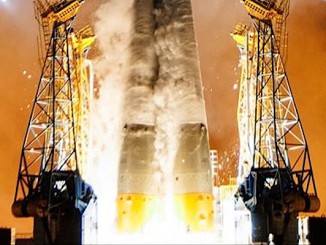 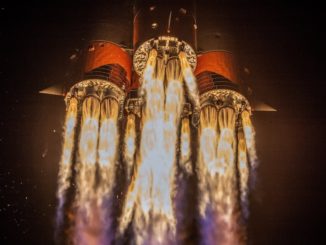 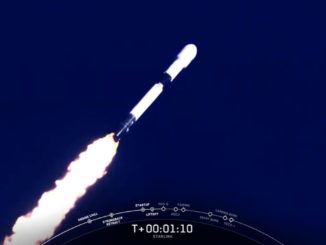