Rocket Lab’s commercial Electron booster fired into orbit from New Zealand on Sunday, carrying a flock of 13 CubeSats on the company’s first mission chartered by NASA, and closing out a landmark year for the new smallsat launch provider as Rocket Lab aims to grow its flight rate to at least one per month in 2019.

The rocket’s nine first stage engines powered the Electron launcher toward the south, throttling up to full power with more than 40,000 pounds of thrust as the rocket climbed into the stratosphere, then detached to call into the Pacific Ocean around two-and-a-half minutes after liftoff.

A second stage with a single Rutherford engine ignited to reach a preliminary parking orbit around nine minutes into the flight, and a liquid-fueled kick stage separated, coasted over Antarctica, and then ignited its Curie engine for a planned 90-second burn to inject the mission’s 13 CubeSat payloads into a near-circular orbit around 310 miles (500 kilometers) above Earth, with a ground track inclined 85 degrees to the equator.

Rocket Lab announced all 13 CubeSats deployed from the kick stage, and company founder and chief executive Peter Beck called it a “perfect mission” on Twitter.

The U.S.-New Zealand company has a privately-owned launch base and assembly center in New Zealand, and its corporate headquarters and an engine factory are located in Southern California. Sunday’s launch was the third successful flight by Rocket Lab this year — and the second in five weeks — following a test flight in May 2017 that fell short of orbit, but tested many of the Electron rocket’s key systems.

The nanosatellites launched Sunday come from NASA’s Goddard Space Flight Center, Glenn Research Center and Langley Research Center, along with the U.S. Naval Academy and educational institutions in California, Florida, Idaho, Illinois, New Mexico and West Virginia. There are also CubeSats from the Aerospace Corp. based in Southern California, and the Defense Advanced Research Projects Agency — the research and development arm of the U.S. Defense Department.

Ten of the CubeSats launched Sunday are part of NASA’s Educational Launch of Nanosatellites, or ELaNa, program.

“We’re providing small satellite customers with more control than they’ve ever had, enabling them to launch on their own schedule, to precise orbits, as frequently as they need to,” Beck said.

The Electron rocket is sized to haul small satellites into orbit, and it’s the first of a wave of new light-class commercial launchers in development to enter service.

Like its competitors in the smallsat launch market, Rocket Lab says it can provide CubeSats and microsatellites a dedicated ride into orbit at a bargain price per flight. Smallsats have previously launched as secondary payloads, usually at the whim of the schedule and destination of the rocket’s main passenger, forcing smallsat owners to compromise on orbital parameters like inclination and altitude, which can affect the commercial utility to scientific output of a space mission.

Rocket Lab’s first launch pad is in New Zealand, but the company is building a second pad at the Mid-Atlantic Regional Spaceport at NASA’s Wallops Flight Facility in Virginia. Rocket Lab is headquartered in Huntington Beach, California, where it builds engines and avionics for the Electron vehicle. The Auckland site is home to the company’s mission control center, tank production and Electron’s final assembly hall.

“It’s great because now we have the ability to have our own vehicle class that focuses on the small arena,” said Garrett Skrobot, a senior mission manager from NASA’s Launch Services Program at the Kennedy Space Center, which oversees the launch of the agency’s science missions. “To me, it’s opening the door to a lot of new adventures for the small payload class and community. It’s not just us. The other government agencies are also looking at this. The commercial market is looking at it.”

As space technology matures, miniaturized components allow fleets of smallsats to do missions that once required bigger spacecraft that are more expensive to build and launch. Companies such as Planet and Spire are using CubeSats for Earth-imaging, weather forecasting, and aircraft and ship tracking, and huge constellations of relatively small refrigerator-sized communications satellites are planned by SpaceX, OneWeb, Telesat and other firms.

“Look at how many Flocks (Earth-observing CubeSats) are up there from Planet, and we’ve seen other people put them up,” Skrobot said in an interview with Spaceflight Now. “And the FCC (Federal Communications Commission) is approving licenses for a lot of the big constellations coming up.”

Rocket Lab is the first of the group to be ready for a NASA mission. Virgin Orbit’s air-dropped LauncherOne rocket is scheduled for its first orbital test flight in early 2019, and NASA plans to put a fleet of CubeSats on a subsequent LauncherOne mission next year.

NASA terminated the contract with Firefly Space Systems when the company could not meet its contractual commitments. The Texas-based company later folded, but came back under new ownership and with a new name — Firefly Aerospace — and has renewed its launcher development effort.

“With any rocket development, there are going to be some delays,” Skrobot told Spaceflight Now. “They run into issues and concerns throughout the process of developing their vehicle. We understood that. This is more us watching them develop the vehicle for the future than it is a ride for the CubeSats. Yes, we want to the CubeSats to be successful. However, from a programmatic perspective for the agency, it’s to help make sure we have this new capability for our science mission directorate or the technology directorate, the opportunity to get their missions into space at a reasonable cost.”

NASA took a hands-off approach with the Venture Class Launch Services contractors, a change from the agency’s close-up oversight of launch companies it pays to send more costly satellites into space — providers such as United Launch Alliance and SpaceX.

Rather than dispatching a team of engineers, managers and technicians to the Rocket Lab launch base in New Zealand, Skrobot said NASA sent one employee from KSC.

“The whole concept behind this is it’s an FAA-licensed (commercial) launch, so we want to keep the crews very small, so we don’t have a lot of insight and oversight,” Skrobot said. “So we sent one individual, an integration engineer/mission manager-type who went down there, and we do have one contractor with him that is supporting the spacecraft.”

Rocket Lab’s launch contract with NASA for Sunday’s flight was valued at $6.9 million, more than an order of magnitude less than what the space agency pays for launches on bigger rockets.

The Electron rocket can haul up to 330 pounds (150 kilograms) of payload in a polar orbit around 310 miles (500 kilometers) above Earth. The rocket’s capacity to a lower-altitude orbit is up to 500 pounds (225 kilograms).

“They may be a little higher (cost) per kilogram, but we have a dedicated vehicle,” Skrobot said of the new smallsat launch providers. Right now, we’re looking at flying payloads on ESPA (secondary payload) rings. That’s very good. But each one of those ESPA ring payloads need to go in the orbit where the primary payload is going, or somewhere a little below that. Inclination changes are very difficult to do.

“We may be paying a little bit more per kilogram (with Venture Class Launch Services), but now these smaller payloads have the ability to go to the exact orbit they really need to, in order to gain as much science as possible for the particular orbit they want. They could fly on an ESPA (secondary payload ring), but now maybe they’ll get more science out of having their own dedicated vehicles in the future,” Skrobot said.

The ELaNa 19 mission launched Sunday was the first dedicated mission for the NASA CubeSat launch program — which Skrobot helped kick off a decade ago — following a series of past CubeSat missions that hitched rides aboard Dragon and Cygnus supply ships bound for the International Space Station, and as secondary payloads on Antares, Atlas 5, Delta 2, Falcon 9 and Minotaur rockets.

NASA typically accepts proposals every year from CubeSat developers at U.S. universities and research organizations, then funds the launch of the best projects. Launch costs for CubeSats can sometimes match, or even exceed, the expense of building the spacecraft itself.

The 310-mile-high deployment on Sunday’s Electron mission will allow the CubeSats, ranging in mass from around 3.4 pounds (1.5 kilograms) to more than 15 pounds (7 kilograms), to remain in orbit longer than it they were released from the space station, due to the reduced atmospheric drag at higher altitudes.

“Some of the CubeSats prefer to go off ISS, those are quicker and easier, but they have to live at a lower inclination and a lower altitude. So those are probably going to last six months or a year, where as these guys here are going to last a little bit longer,” Skrobot said.

The CubeSats launched aboard the Electron rocket through NASA’s ELaNa program are:

“The CubeSats of ELaNa 19 represent a large variety of scientific objectives and technology demonstrations,” said Justin Treptow, NASA’s ELaNa 19 mission manager. “With this the first launch of a Venture Class Launch Service on the Rocket Lab Electron, NASA now has an option to match our small satellite missions with a dedicated small launch vehicle to place these satellites in an optimal orbit to achieve big results.”

In addition to the 10 CubeSats launched through NASA’s ELaNa program, three more nanosatellites flew into orbit on top of the Electron rocket Sunday. NASA also provided a launch opportunity for:

NASA currently does not have any more missions booked with Rocket Lab, but the Electron rocket will be among the launcher options available to the agency’s future Explorer-class missions of opportunity, a family of science missions with costs typically capped at $55 million.

“We have Virgin and Rocket Lab in what we call our catalog, and the catalog identifies all the options for small payloads, be it a CubeSat flying in a deployer, flying on our EELV (Atlas 5, Delta 4, or Falcon 9) vehicles on an ESPA, and we also have Rocket Lab and Virgin Orbit on there as well as opportunities.

“There is still some risk with Virgin (Orbit) right now because they haven’t flown yet, so we’re keeping our eye on that and we’ll tell our customers that once they start flying we’ll have more data and we’ll be able to give them better insight into that. But now with Rocket Lab online … we’ll be able to offer it to our NASA customers.”

Rocket Lab plans to increase its launch date next year to average at least one mission per month, with a goal of launching every two weeks by the end of 2019.

In an October interview, Beck said Rocket Lab has up to 16 launches scheduled in 2019, including the first flight from a new launch pad at Wallops Island, Virginia.

“Our goal by the end of next year is to be launching once very two weeks, and as we move into 2020, launching once a week,” Beck said in October. “We’re tracking a pretty big pipeline of customers, and we’ve been very fortunate that people have put their trust in us. For us, it’s making sure we do everything we can to deliver these customers’ payloads to orbit.”

In a statement issued after Sunday’s launch, Rocket Lab says the next Electron rocket should be on the launch pad in New Zealand in January. The company has not disclosed a launch date for the mission, or revealed what satellites will ride aboard the next launch. 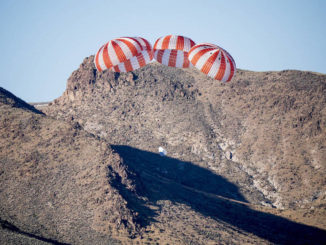 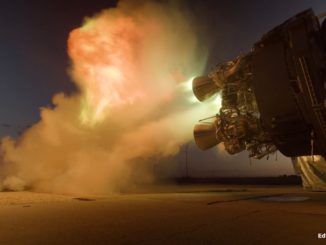 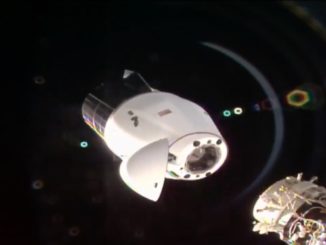