Viasat announced Thursday that a SpaceX Falcon Heavy rocket will launch a next-generation broadband satellite from pad 39A at the Kennedy Space Center some time between 2020 and 2022, joining Arianespace and United Launch Alliance in a three-way split for Viasat’s new launch contracts.

The fresh launch deal is the second commercial Falcon Heavy launch contract signed by SpaceX in recent weeks. The Swedish company Ovzon announced Oct. 16 its selection of a Falcon Heavy rocket to haul its first geostationary communications satellite to orbit from Florida’s Space Coast as soon as the fourth quarter of 2020.

The Viasat launch agreement with SpaceX for a Falcon Heavy launch was widely anticipated by industry officials. In 2016, Viasat moved the launch of a previous satellite, ViaSat 2, from a Falcon Heavy rocket to a European Ariane 5 launcher, while keeping open the option of putting one of the company’s new-generation broadband satellites on a future Falcon Heavy flight.

Viasat has launched two satellites designed for broadband Internet services over North America — ViaSat 1 and 2 — but the company’s next major project will expand the network’s reach globally, with coverage zones over the Americas, Europe, North Africa, and the Middle East, and the Asia-Pacific region. Viasat has ordered two ViaSat 3-series satellites from Boeing, with plans to select a manufacturer for a third ViaSat 3-class spacecraft later this year.

In a statement announcing the Falcon Heavy contract, Viasat said the SpaceX heavy-lifter will deploy the ViaSat 3 satellite “extremely close” to its final perch in geostationary orbit more than 22,000 miles (nearly 36,000 kilometers) over the equator.

Such a high-altitude satellite deployment will require a coast by the Falcon Heavy’s second stage lasting multiple hours before reigniting the upper stage’s Merlin engine. SpaceX demonstrated the long-duration flight capability during a six-hour coast between upper stage engine burns on the Falcon Heavy’s inaugural test flight Feb. 6, which propelled a Tesla Roadster on a speedy trajectory away from Earth and into the solar system.

“Viasat sought a ViaSat 3 launch partner that understood our unique mission requirements: to safely and quickly bring a ViaSat 3 spacecraft into orbit, to further our goal of delivering terabits of data from space to meet growing global broadband demand,” said Dave Ryan, president of space systems at Viasat. “We selected SpaceX as they continue to demonstrate their commitment to advancing space technologies. Their proven technology is both powerful and efficient enough to thrust a ViaSat 3 spacecraft close to geostationary orbit.”

The “near-direct injection” close to geostationary orbit will reduce the time the spacecraft will need to circularize its orbit, expediting the start of the satellite’s in-orbit testing and operational mission. The ViaSat 3 satellites ordered from Boeing will use an all-electric propulsion package, a fuel-efficient thruster system that saves weight but can take months to put a spacecraft into geostationary orbit from a standard elliptical geostationary transfer orbit used on most launches.

“There are exciting opportunities for Falcon Heavy in the market, particularly for customers like Viasat that need direct-injection extremely close to geostationary orbit,” said Gwynne Shotwell, SpaceX’s president and chief operating officer. “We look forward to delivering ViaSat 3 to orbit and helping bring Viasat’s latest technology into service.”

Financial terms of Viasat’s contract with SpaceX were not disclosed.

Viasat has prioritized diversity in its launch bookings for the ViaSat 3 program. The company cinched an agreement with Arianespace in 2016 to launch one of the ViaSat 3 satellites aboard an Ariane 5 rocket from French Guiana, and Viasat last month announced a contract to launch another ViaSat 3 spacecraft on a United Launch Alliance Atlas 5 rocket from Cape Canaveral, which will also release its payload in a “high-energy” transfer orbit minimizing the satellite’s transit time to geostationary altitude.

Officials will assign specific spacecraft to reach rocket at a later date.

The diversified launch strategy is “designed to ensure the on-time launch of its spacecraft through launch vehicle diversity and a systemic, integrated approach to launch planning,” the company said in a statement. “Viasat will announce specific ViaSat 3 mission assignments for each of its contracted launch vehicles at a later date.”

Viasat says it expects the cost of the first two ViaSat 3-class missions, including satellite, launch, insurance and payload expenses, is expected to be between $1.2 billion and $1.4 billion. The company plans the first two satellites to cover the Americas and the Europe, Middle East and Africa regions.

Each satellite in Viasat’s third-generation network will provide more than a terabit per second of Ka-band network capacity, providing connectivity to remote customers, airliners and ships outside the reach of terrestrial networks.

The ViaSat 3 contract, coupled with SpaceX’s Ovzon contract win earlier this month, gives the Falcon Heavy a backlog of five confirmed missions — two for the U.S. Air Force, and one each for Arabsat, Ovzon and Viasat.

The London-based satellite company Inmarsat also has a launch reservation for a Falcon Heavy flight, but the company has not confirmed a payload for the mission.

Two Falcon Heavy launches are planned next year from the Kennedy Space Center carrying the Arabsat 6A commercial communications satellite, and the multi-payload STP-2 launch purchased by the Air Force. 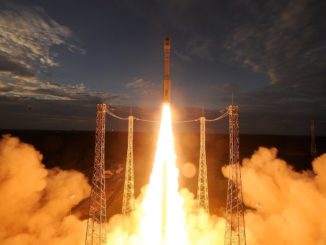 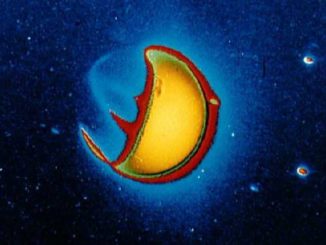 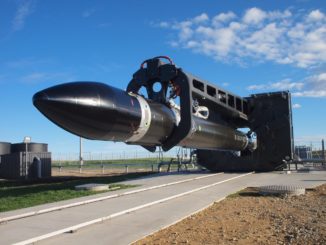