Rocket Lab’s Electron rocket made its first test flight May 25, soaring higher than an altitude of 139 miles (224 kilometers) before a piece of ground tracking equipment faltered, erroneously leading a range safety officer to terminate the launch for safety reasons. Designed to deliver small satellites weighing up to 330 pounds (150 kilograms) to a circular sun-synchronous orbit around 310 miles (500 kilometers) above Earth, the two-stage Electron will make its second test flight some time late this year.

Beck said the inaugural Electron rocket performed according to plan until the flight ended, demonstrating virtually all the major events during a climb into orbit. The liquid-fueled Electron’s nine first stage engines and single upper stage engine all worked as expected until the command to terminate the flight.

The U.S.-New Zealand company developed a launch facility on Mahia Peninsula on the eastern coast of New Zealand’s North Island. While its current control center and manufacturing plant are located in New Zealand, the company has a headquarters in Southern California and operates under the regulatory umbrella of the Federal Aviation Administration.

Rocket Lab’s progress was marked with test launches of more than 80 sounding rockets since the company’s formation. The total money invested in Rocket Lab to date is $148 million, and the company was valued at more than $1 billion during a Series D financing round closed in March.

With money from venture capital funds in Silicon Valley and New Zealand, along with a strategic investment from Lockheed Martin, Rocket Lab completed the design and qualification of the Electron rocket with less than $100 million since the company was established in 2006, according to Beck.

Beck’s interview with Spaceflight Now is posted below.

Q: How happy are you with the way the Electron vehicle performed on the inaugural flight?

A: We’re very happy with the performance of the vehicle. The flight was a heavily instrumented flight. It had something like 25,000 channels of data and instruments on-board, and the data that we were able to obtain was exceptionally good, and it enabled us to validate all the engineering decisions and performances of the vehicle, the thermal environment, the structural environment. We captured all the data we needed. We’re feeling really good about the vehicle, and we’ve accelerated our commercial program. We’ve committed to six commercial vehicles, so it put us in a really good position. Before the first flight, you never know what you’ve got, so being able to instrument the vehicle and get the quality and quantity of data we did puts us in a very strong position to move forward. Cutting a long story short, we’re feeling very good and very confident about the vehicle’s performance and the beginning of commercial operations.

Q: Are those six commercial flights all sold to customers?

A: They’re all sold.

A: We’ve got the next test flight rolling out out to the pad in about eight weeks’ time. If it’s a really good clean flight, we’ll probably accelerate into commercial operations. If Test Flight 2 goes really well, then Test Flight 3, there’s not really a whole lot of point in doing it. It’s just gathering more statistics at that point. (If that test flight goes well), we’ll probably accelerate commercial operations and not do a Test Flight 3, but it’s early days yet, and we’ve been in this business long enough to know that there’s always potentially something lurking there that you didn’t see. So at the moment, we’re still planning a full three-flight program, but there is a possibility of accelerating the commercial debut of the vehicle.

Q: So the next launch would be some time shortly after that rollout in eight weeks?

A: Yeah, absolutely. There’s a few weeks on the pad doing all the integration. This vehicle, again, has on the order of 25,000 or 30,000 sensors, so for us these flights are all about gathering data, so there’s a lot of “go-no go” criteria around those sensors. Usually, it takes us a good couple of weeks to get all that buttoned up, and then we’ll be ready to launch.

Q: Do you expect a smoother campaign leading up to the second test flight now that you have some experience?

A: That would be great if we could, but I’m conscious that these are still test flights, and we operate in a very cautious manner. So if something is looking a bit weird, then we just won’t go. It’s more important at this point in time to take the time to get everything perfect. I certainly hope we can turn it a little bit faster, but once again, it’s a heavily instrumented flight, and every one of those sensors is really important to us. So we’ll probaly take our time once again, but you’d think it might be faster the second time, right?

Q: Rocket Lab’s press release said you’re not making any major changes to the vehicle for the second flight. Are there any minor changes?

A: Of course. We had lots of margins on some areas, so we’ve reduced some thermal insulation in some areas, and reduced some mass and complexity and optimized some things for production, but there are no major hardware changes. We’re not pulling out any subsystems or reworking any subsystems. There are some software tweaks, of course, as there always are, but it’s not like we had to go back and redesign anything for the next flight.

Q: Are there any payloads on the next flight, or will it be a purely instrumented payload as with the first test flight?

A: It’s mainly instrumented, but we are flying some payloads up, and we developed our own CubeSat deployers. We have a 3U, 6U and 1U CubeSat deployer of our own that’s gone through all the ground qualification, and we’re flight qualifying those. We’ll do that on that flight as well. It just gives us a good oppportunity to qualify more components and more systems.

Q: Will the Outernet CubeSats be on the next launch?

A: They’re not the Outernet guys. We’ll identify them later and make an announcement closer to the time. We want to make sure that they get the most out of it.

Q: Do you think you can still begin commercial service by the end of the year?

Q: Is there still a chance to launch the Moon Express lunar mission by end of the year?

A: For the moon flight the construction of that vehicle is largely complete, and we’ll be able to support that missoin at the end of the year.

Q: Going back to the issue from the May test flight, what exactly was the piece of equipment responsible for the premature termination of the launch?

A: There are two independent telemetry systems. There’s the Rocket Lab telemetry system, where we are downlinking all the vehicle flight data, and then there’s a second telemetry system ,which is standalone that’s run by our contractors for flight safety. That system is responsible for the termination of the vehicle. Basically what happened is the contractor misconfigured the software, which resulted in the antennas losing track of the vehicle. Of course, when that happens, the flight safety officers who are looking at a computer screen at their console, the rocket disappears off their console, so they had no other option than to terminate the vehicle.

Q: Who was the contractor?

A: We all have a bad day, and it’s just not our style to name and shame contractors.

Q: Is the flight termination system for Electron using thrust termination, or is there a pyro charge on-board?

A: It’s  just thrust termination. You’ll see from the videos, the vehicle is running and the engine stops. That’s just the thrust being terminated. Even though the engine stopped, the vehicle didn’t stop. It went on and continued to do all its normal things as it would on orbit. We were able to test absolutely everything, even though we didn’t make it to orbit. We tested all the RCS (Reaction Control System) and all the orbital systems, and unfortunately, we also tested the flight termination system, so we can say that we tested absolutely everything on the vehicle.

Q: Some of video from the first test launch showed the vehicle rolling when it climbed off the pad. Was that an issue or expected?

A: The bottom line on that one is the guidance team didn’t want to over-constrain the roll. The roll is the least damped axis. When you’ve got nine engines on the bottom, theres’ a lot of plume-plume interaction. The nine engines sort of interact with each other, and it’s very easy to cause roll torques. What the GNC (Guidance, Navigation and Control) team decided to do is we would let the vehicle roll, but we would control it to a rate. So the vehicle rolled to the pre-programmed rate, and that gave us the ability to characterize all of the engines and the roll characteristics of the vehicle. On the next flight, we probably won’t run that same algorithm, or we’ll keep the vehicle in one attitude, but for us, it was all part of the test program to learn and to characterize all those weird torques that are impossible to try and learn on the ground.

Q: What do you use for roll control?

Q: Do you plan to provide live public webcast for your next launch?

A: I think we probably will. It’s a resource issue for us at the moment, standing all that up and doing it in a way that’s a good enough job. I think we’ll take a crack at it. 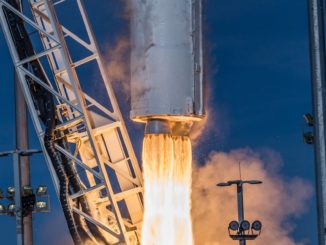 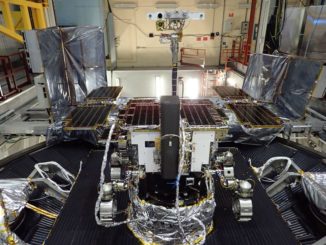 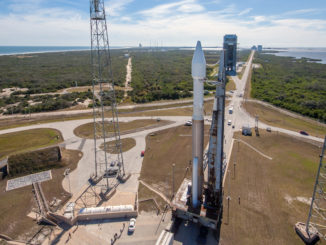