Japan’s space agency has set Sept. 30 as the target launch date for the country’s sixth resupply mission to the International Space Station, carrying cargo, experiments and six lithium-ion batteries to kick off a major upgrade of the lab’s electrical system.

The cylinder-shaped cargo craft is set for liftoff at 1716 GMT (1:16 p.m. EDT) Sept. 30 from the Tanegashima Space Center, a facility nestled on the southern coast of Tanegashima Island in southern Japan, the Japan Aerospace Exploration Agency announced Tuesday.

The launch of the sixth H-2 Transfer Vehicle will occur in the predawn hours Oct. 1, Japanese time.

Japan has nicknamed the mission Kounotori 6, which means white stork. It will transport about 9,365 (4,248 kilograms) of cargo in separate pressurized and unpressurized modules, according to the latest payload manifest.

The Kounotori 6 spacecraft will reach the space station Oct. 4, when astronauts will snare the approaching supply ship with a robotic arm.

It will stay attached to the space station’s Harmony module until around Nov. 11, during which time astronauts Shane Kimbrough and Takuya Onishi will go outside on two spacewalks to help install six lithium-ion batteries, lighter and more efficient replacements for the station’s existing nickel-hydrogen batteries.

The space station’s Canadian-built robotic handyman, Dextre, will remove the outpost’s nickel-hydrogen batteries mounted on the lab’s power truss before the spacewalks. The robot will also help place the lithium-ion batteries into their new homes on the station’s power truss, while Kimbrough and Onishi will route electrical connections and install adapter plates.

Bill Gerstenmaier, NASA’s associate administrator for human exploration and operations, said this week that the two-armed, tool-carrying Dextre robot began preparing for the arrival of the new batteries earlier this year by breaking torque on bolts.

“We’ll actually remove the batteries before the crew goes out, so they’ll actually be pulled out with the SPDM (Dextre), so then all they have got to do is go install the new one,” Gerstenmaier told members the NASA Advisory Council on Monday.

With the help of robotic aids, Gerstenmaier said space station managers believe the battery swap can be performed in two or three spacewalks, down from as many as a half-dozen excursions originally anticipated.

Robotics engineers plan to have Dextre complete all the removal and replacement work on at least some of the battery units, a NASA spokesperson said Wednesday.

The Kounotori 6 mission will deliver the first six of 24 lithium-ion battery units to replace the space station’s aging nickel-hydrogen batteries. Six of the oldest batteries, which launched with the station’s first solar array trust segment in 2000, were changed out with new nickel-hydrogen units on a space shuttle mission in 2009.

The oldest remaining batteries, made by Space Systems/Loral, are also now beyond their design lifetimes.

After this year’s launch, engineers are working on 18 additional lithium-ion battery sets to fly on three more Japanese HTV missions set for launch in 2018 and 2019.

The new lithium-ion batteries should operate for at least 10 years — longer than the space station’s remaining lifetime. Each new unit weighs about 550 pounds (250 kilograms) provides the same energy storage capability as two of the current nickel-hydrogen batteries.

At the end of Kounotori 6’s mission, the spacecraft will plunge back to Earth for a destructive re-entry, disposing of space station rubbish and the disused nickel-hydrogen batteries.

Kounotori 6 will also deliver 600 liters — about 158 gallons — of fresh water for the space station’s crew.

The Kounotori 6 mission will come after back-to-back commercial cargo deliveries made by SpaceX and Orbital ATK.

SpaceX’s Dragon freighter is currently berthed to the orbiting complex after arriving July 20 with nearly 2.5 tons of supplies, including a new docking adapter designed to receive future commercial crew capsules.

Astronauts Jeff Williams and Kate Rubins plan to help connect the docking port to the station during a spacewalk in August. The station’s robotic arm will first extract the adapter from the Dragon spacecraft’s trunk section and maneuver it over an attachment fixture on the forward end of the research lab’s Harmony module.

Orbital ATK’s next Cygnus supply ship is set for liftoff no earlier than Aug. 22 from Wallops Island, Virginia, aboard the company’s upgraded Antares rocket. It will mark the first launch of the modified Antares booster with two new RD-181 engines, which replaced suspect decades-old AJ26 powerplants blamed on an Antares launch failure in 2014.

Sam Scimemi, director of the space station program at NASA Headquarters, said Monday that the Orbital ATK Cygnus mission must depart the complex before Kounotori 6’s arrival because both spaceships use the same proximity communications radio on the station.

That puts a schedule constraint on the timing of the Cygnus and HTV launches, he said.

If the Antares launch is delayed, the HTV could launch first, putting the Orbital ATK logistics flight later in the fall.

A high-priority Japanese weather satellite is also awaiting a launch on an H-2A rocket from Tanegashima before the end of the year, adding urgency to launch the HTV supply ship to the space station on time at the end of September. 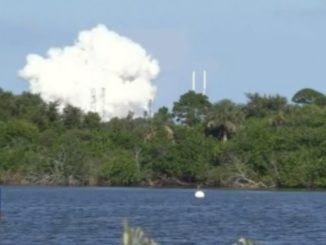 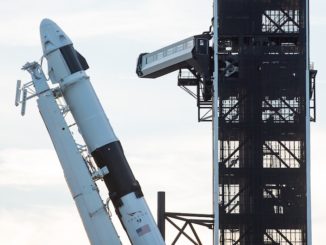 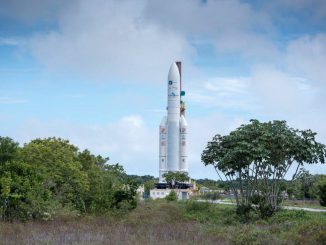