In case the the sight of a large rocket plummeting back to Earth, only to be slowed in the last seconds by a puff of engine thrust, hasn’t lost its novelty yet, SpaceX and Blue Origin have released dramatic videos showing their recent powered rocket landings from new angles.

SpaceX posted a clip on YouTube showing the views from three cameras mounted on the company’s ocean-going landing platform as a 15-story Falcon 9 booster descended to a smooth touchdown May 6 after launching from Cape Canaveral with the Japanese JCSAT 14 communications satellite.

The rocket nailed the landing less than nine minutes after blasting off at 1:21 a.m. EDT (0521 GMT) May 6, notching SpaceX’s second successful booster landing at sea.

It marked the first time SpaceX has recovered a Falcon 9 first stage after a launch to geostationary transfer orbit, a high-altitude perch favored by commercial communications satellites, which make up about half of the company’s backlog. Rockets heading for such orbits must travel faster after liftoff, meaning the first stage descends back through at the atmosphere at higher speeds, increasing pressures and heating on the vehicle.

Such launches also leave less excess fuel for the first stage to slow down for landing, forcing engineers to omit a “boostback” maneuver as the rocket arced on a suborbital path to the landing vessel, or drone ship, positioned nearly 400 miles (650 kilometers) downrange in the Atlantic Ocean.

After a re-entry burn, the booster fired three of its Merlin 1D first stage engines seconds before landing to slow for a gentle touchdown. Thrust from three of the throttle-able engines was needed to brake the high-speed descent for landing, instead of the single-engine landing burn used on other missions.

The company described the fiery descent as its “hottest and fastest landing yet.”

SpaceX plans to thoroughly inspect the stage. The company hopes to launch a previously-flown Falcon 9 rocket booster later this year, likely the first stage SpaceX recovered after a launch to the International Space Station last month.

Blue Origin’s New Shepard booster, a single stage suborbital launcher, took off from a test facility in West Texas and flew to an altitude of 339,138 feet, or 64.2 miles (103 kilometers), just above the internationally recognized boundary of space.

A video recorded by a camera on-board the New Shepard booster near the vehicle’s gaseous hydrogen vent shows the rocket plunging from space back toward a remote desert landing zone near its launch pad.

The New Shepard fired its hydrogen-fueled BE-3 engine at an altitude of 3,635 feet (about 1,100 meters), just six seconds before it would have crashed into the ground, and extended its four landing legs moments before touchdown.

The deployment of the landing legs is visible on the New Shepard’s shadow seen in the on-board camera view.

Blue Origin’s April 2 test flight was the third time the same reusable New Shepard booster has flown, coming after launches in November 2015 and in January. It flew with an unpiloted crew capsule under development by Blue Origin to take space tourists on brief trips beyond the atmosphere in as little as two years.

The April 2 flight carried Blue Origin’s first commercial payloads into space. The experiments from the Southwest Research Institute and the University of Central Florida were designed to investigate the behavior of rocks and dust grains in microgravity.

If everything goes as planned, Blue Origin aims to begin human test flights next year. 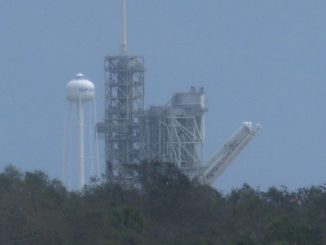 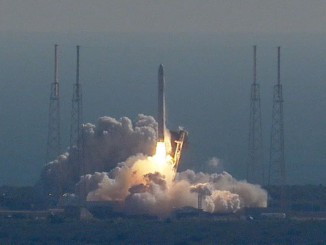