Freed from a legal restriction officials said limited its ability to compete for future U.S. military satellite launches, United Launch Alliance has ordered 20 new RD-180 engines from Russia that will keep the Atlas 5 rocket flying into the early 2020s.

The new purchase of 20 RD-180 engines will serve ULA’s existing and potential civil and commercial launch customers while the company supports development of a new U.S.-built engine to replace the Russian powerplant, which is used on the first stage of the company’s workhorse Atlas 5 rocket, ULA said in a Dec. 23 statement.

ULA placed the order with RD AMROSS, a Florida-based company that imports the RD-180 engines manufactured by NPO Energomash, a Moscow firm that makes engines for most Russian launch vehicles.

“While ULA strongly believes now is the right time to move to an American engine solution for the future, it is also critical to ensure a smooth transition to that engine and to preserve healthy competition in the launch industry,” ULA said in a statement.

The agreement for 20 more RD-180 engines comes after ULA’s purchase of 29 engines before Russia’s annexation of Crimea in early 2014.

United Launch Alliance was the sole company eligible to compete for contracts to launch the Pentagon’s most expensive space missions since the company’s formation in 2006 with the merger of Boeing and Lockheed Martin’s Delta and Atlas rocket programs.

That changed last year with the Air Force’s certification of SpaceX’s Falcon 9 rocket to haul national security satellites into orbit. ULA remains the only contractor capable of delivering the military’s heaviest spacecraft into orbit, until SpaceX’s Falcon Heavy rocket goes through its own certification program, a milestone officials do not expect to be complete until 2017, assuming the triple-core rocket achieves three successful missions in time.

Language inserted into the 2015 National Defense Authorization Act limited ULA’s use of RD-180 engines for future U.S. military launch competitions with SpaceX, outlawing engines that were paid for after Feb. 1, 2014.

Officials from ULA and the Air Force argued the limitation would unfairly inhibit the Atlas 5 rocket from competing head-to-head with SpaceX’s Falcon 9 for lucrative military launch deals. ULA and Pentagon leaders wrangled with lawmakers for a year, attempting to carve out exemptions for at least some RD-180 engines to give the Atlas 5 access to the military contracts.

A clause in a U.S. government spending bill signed into law earlier this month effectively removed the RD-180 engine ban, stating that the Air Force could award launch contracts to any company certified to fly the Pentagon’s satellites, regardless of the country of origin of the rocket’s engines.

The lifting of the engine restriction was backed by Sen. Richard Shelby, a Republican of Alabama, where ULA’s rocket factory is located.

The policy reversal did not come in time for ULA to submit a bid for the launch of a Global Positioning System satellite in November. ULA says it did not give a proposal to the Air Force because it did not have an RD-180 engine eligible to use for the mission, blaming legal restrictions in the defense authorization act.

ULA chief executive Tory Bruno announced earlier this year his intention to retire the single-core medium-lift version of the Delta 4 rocket by 2018. While the Delta 4 uses U.S. engines, ULA admits it is more expensive than the Atlas 5 and not competitive the lower-priced Falcon 9.

With the Falcon 9’s certification, and the availability of the Atlas 5 now more clear, the Air Force has two rockets capable of launching many — but not all — of the military’s satellites, keeping the Pentagon’s long-standing policy of assured access to space.

ULA said its purchase of more RD-180 engines does not affect its commitment to developing a new U.S. engine to take the place of the Russian powerplant in the future.

“We are moving smartly with our engine partners, Blue Origin and our backup Aerojet Rocketdyne, but this type of development program is difficult and takes years to complete,” ULA said in a statement. “Until then, this bridge contract will allow ULA to provide the reliable, affordable launch services our civil and commercial customers depend on from us while the new, American engine is being developed.”

Blue Origin and Aerojet Rocketdyne are working on the BE-4 and AR-1 engines, each generating about 500,000 pounds of thrust. Two of the engines would power the first stage of ULA’s next-generation Vulcan launcher.

Lawmakers appropriated $227 million in 2016 to speed up development of a new U.S. propulsion system, to be doled out in a series of research and development contracts. Blue Origin and Aerojet Rocketdyne say private funding has financed their BE-4 and AR-1 engine work to date.

ULA says the Vulcan rocket should be ready for its first flight by the end of 2019, but it could take three more years to amass enough launches to be certified to carry U.S. military satellites. 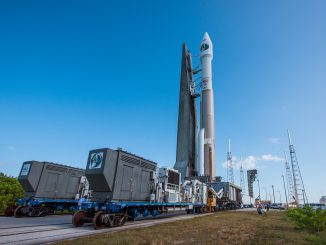 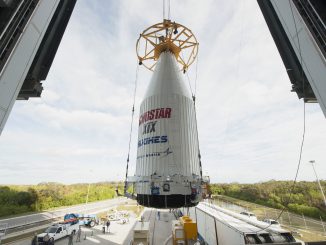 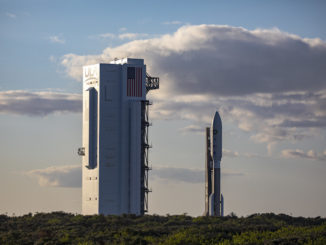