The European Space Agency has cinched an agreement with Arianespace for the October 2018 launch of the James Webb Space Telescope aboard an Ariane 5 rocket, which will dispatch the nearly $10 billion observatory on a bold mission that promises to rewrite astronomy textbooks.

Billed as the follow-up to the Hubble Space Telescope, JWST is heading for an observation post at the L2 Lagrange point 1.5 million kilometers (nearly a million miles) from Earth.

Named for the second administrator of NASA, the telescope is a joint project between space agencies in the United States, Europe and Canada.

With the vision to see 13.5 billion years back in time, its mission is to detect the earliest galaxies that formed after the Big Bang, study the life cycles of galaxies and stars, and resolve planets in other solar systems to probe their habitability.

NASA leads development of JWST, while Europe is supplying instruments and a launch vehicle, and Canada is building the telescope’s fine pointing sensors and a near-infrared science sensor.

JWST’s costs have swelled and its launch is years behind schedule, and U.S. lawmakers threatened to cancel the observatory project in 2011, but NASA has since righted the mission and officials say they have budget and schedule margin to meet the October 2018 launch date.

“With this key contract now in place with our long-standing partners, we are closer than ever to seeing the scientific goals of this next-generation space observatory realized,” said Jan Woerner, ESA’s director general.

ESA declined to disclose the value of the Ariane 5 launch contract, which was long expected because the Ariane 5 is the only European rocket capable of hauling up JWST.

Peter Jensen, ESA’s JWST project manager, said technicians preparing the rocket and the spacecraft will “exercise stricter than normal cleanliness control measures for the facilities and the fairing during the launch campaign.”

The extra precautions are above and beyond normal space mission requirements because of JWST’s ultra-sensitive gold-coated mirrors and detectors, which must remain tuned for the telescope’s 10-year mission.

With a liftoff mass of 6.6 metric tons — about 14,500 pounds — the James Webb Space Telescope will ride the most powerful version of the Ariane 5 rocket with a hydrogen-fueled upper stage, called the Ariane 5 ECA.

“It is a great honor for Arianespace to be entrusted with the launch of JWST, a major space observatory which will enable science to make a leap forward in its quest of understanding our universe,” said Stephane Israel, Arianespace’s chairman and CEO, in a statement. “It is also an immense privilege to be part of such an international endeavor gathering the best of United States, Europe and Canada space technology and industry.”

The Ariane 5 rocket, which has performed 69 successful launches in a row since 2003, will hurl the massive telescope on a trajectory toward the Lagrange point, where it will enter a looping halo-like path around L2.

After its sendoff from the Ariane 5 launch base in French Guiana, the observatory will unfold solar panels, its segmented mirror array and a sunshield like origami in a series of critical deployments before it can begin science operations.

Ground crews at NASA’s Goddard Space Flight Center in Maryland are assembling pieces of the telescope’s primary mirror, which will consist of 18 hexagonal segments stretching to a diameter of 6.5 meters (21.3 feet) when unfolded in space.

That gives JWST around seven times more collecting area than Hubble, allowing the next-generation telescope to see objects up to 100 times fainter.

Once engineers complete the build-up and testing of the telescope and instrument module at Goddard, it will be shipped to Houston for another round of cryogenic testing at NASA’s Johnson Space Center, then transported to prime contractor Northrop Grumman’s facility in Southern California for mating to the spacecraft bus and sunshield.

Some time in mid-2018, the completed JWST will ride a ship from California, through the Panama Canal, to the European-run Guiana Space Center in South America for final preparations for launch on an Ariane 5 rocket. 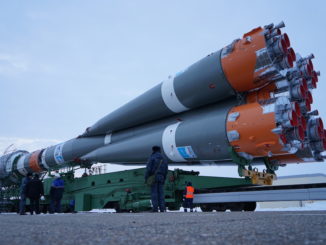 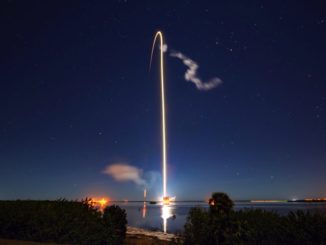 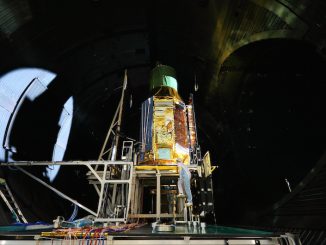