CAPE CANAVERAL — Assembly of a 19-story Atlas rocket started today for a commercial launch next month to aid Mexico’s telecommunications reform aimed at economic growth and the betterment of its societal welfare.

Stacking kicked off less than two weeks after the last Atlas launch, which occurred Sept. 2 to successfully deliver a U.S. Navy mobile communications satellite into orbit.

“Mexico is performing significant investments in a satellite system infrastructure project called the MEXSAT. The reform contemplates its role as one of the essential instruments to boost the development of telecommunications in benefit of all Mexicans,” said Gerardo Ruiz Esparza, Mexico’s minister of communications and transportation.

“This administration knows Mexico needs a solid, long-term satellite public policy with modern technologies and strong social orientation. This is precisely what this (MEXSAT) program is about.”

The $1.6 billion MEXSAT program hasn’t unfolded cleanly, however. A duplicate spacecraft to Morelos 3, dubbed the Centenario satellite, was destroyed in May by the failed launch of a Russian Proton rocket.

The first element of the MEXSAT project was launched by an Ariane 5 rocket in 2012 to provide video services. It is a small, Orbital ATK-built satellite.

The stacking work for AV-059 began this morning as the bronze-colored, 106.6-foot-long, 12.5-foot-diameter first stage was pulled to the VIF doorway, erected upright and hoisted inside the building to be put aboard the mobile launcher platform.

In the coming days, two strap-on boosters will be added, along with the barrel-like interstage adapter and the Centaur upper stage. Centaur is 41.5 feet in length, 10 feet in diameter and is fueled by liquid hydrogen and liquid oxygen.

The payload is undergoing its own processing in nearby Titusville at the Astrotech facility. It will be delivered to the VIF and mated to the Atlas-Centaur in late September.

The rocket, delivering 1.5 million pounds of liftoff thrust, will be flying in the 421-variant that features an RD-180 main engine powering the first stage, a pair of strap-on solid-fuel boosters and an RL10 on the Centaur upper stage. The satellite will be enclosed in a 14-foot-diameter aluminum nose cone for atmospheric ascent.

The launch will be the 57th Atlas 5 rocket since 2002 and its 12th commercial flight. For United Launch Alliance, it is the company’s 100th launch overall since 2006 and the ninth this year. 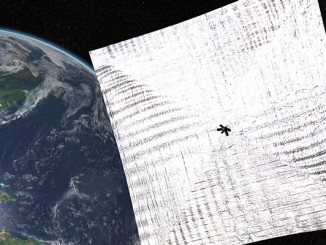 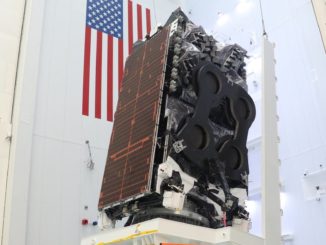 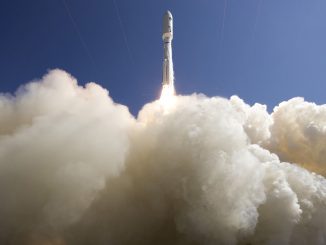