A rocket-powered prototype of SpaceX’s human-rated crew capsule vaulted off a launch pad at Cape Canaveral on Wednesday for a brief mile-high test flight of the spaceship’s emergency crew safety system.

No astronauts were aboard the capsule for Wednesday’s test, but SpaceX installed a human-sized crash test dummy fastened inside the ship’s crew cabin to mimic the ride passengers could encounter during an abort from the launch pad.

“It was a great outcome,” said Elon Musk, SpaceX’s founder and CEO. “Had there been people on-board, they would have been in great shape.”

Flying straight up, the gumdrop-shaped spaceship reached 100 mph in 1.2 seconds, blazing away launch complex as it pitched east toward the beach.

The eight 3D-printed SuperDracos engines consumed their nearly two-ton load of hydrazine and nitrogen tetroxide propellant in less than six seconds, pushing the Dragon capsule a third of a mile above Cape Canaveral.

The spacecraft coasted higher until it released a disposable trunk segment at the apex of its trajectory. The flight was programmed to reach a peak altitude of nearly 5,000 feet.

The capsule rotated to point its heat shied to the ground, then deployed a pair of stabilizing drogue parachutes and three orange and white main chutes to slow its descent.

The flight targeted a landing point about 1.4 miles from the launch pad, but a SpaceX engineer said on a control radio loop that the capsule’s top speed was “slightly below nominal.”  The capsule splashed down a minute and 39 seconds after takeoff, about eight seconds earlier than planned.

SpaceX declared the flight a success.

Speaking to reporters a few hours after the abort demo, Musk said one of the capsule’s SuperDraco engines underperformed, blaming an abnormal fuel mixture ratio. He characterized the glitch as minor.

“All eight engines don’t need to work in order for the launch abort to be successful,” Musk said. “It can actually work with as few as four of the engines working. It has engine-out capability in the launch abort as well.”

SpaceX recovery crews were stationed offshore to retrieve the spaceship and haul it aboard a barge for transport back to port.

SpaceX hoped to verify the Dragon capsule will follow the proper trajectory during the abort and complete its launch and landing sequence as planned.

Wednesday’s demonstration was a key test for SpaceX as the company develops a human-rated capsule to ferry astronauts to and from the International Space Station. SpaceX says it is on track for the Falcon 9 rocket and Dragon spacecraft to carry crews in 2017.

NASA awarded SpaceX a $2.6 billion contract in September to complete development of the capsule, which SpaceX calls the Crew Dragon. Boeing won a $4.2 billion deal at the same time for its CST-100 crew capsule, which will launch on Atlas 5 rockets.

SpaceX flew the trial run of the spacecraft’s abort mechanism to verify the Dragon’s on-board rocket thrusters could propel astronauts away from an explosive Falcon 9 rocket mishap on the launch pad.

Before NASA signs off on putting its astronauts aboard the capsule, SpaceX must achieve more testing. Musk highlighted two important demonstrations planned over the next 18 months: another abort test at high altitude and an unpiloted round-trip mission with the Crew Dragon to the space station.

“I think this bodes quite well for the future of the program,” Musk said after Wednesday’s abort test. “I don’t want to jinx it, but this is really quite a good indication for the futue of Dragon. I think people will hopefully be excited about the upcoming unmanned flights — the high-altitude abort and the unmanned flight to the space station and back.

“That should be really exciting over the next year-and-a-half or so, and hopefully within two years we’ll be transporting crew to and from the space station,” Musk said.

Under the company’s cost-sharing agreement with NASA, the space agency planned to award $30 million to SpaceX after the pad abort test. NASA pays out funding to its commercial crew program partners after they achieve pre-determined design and test milestones.

“There are two points in the trajectory that are the hardest for that system to work,” said Garrett Reisman, a former space shuttle astronaut and current director of crew operations at SpaceX. “The first is when it’s sitting still on the pad, and we call that a pad abort. When you have zero altitude and zero airspeed, you’ve got to get high enough and far enough downrange so you can get the parachutes out, get to the water, and get far enough away from any bad thing that might be happening (on the pad). That proves that you have enough gas in the tank, essentially.”

SpaceX engineers planned to truck the capsule to the company’s test facility in McGregor, Texas, for inspections and refurbishment before the next abort test scheduled later this year from Vandenberg Air Force Base in California.

During the second abort run, the capsule will launch atop a Falcon 9 rocket and trigger an escape maneuver at high altitude, simulating an emergency under intense aerodynamic stress.

“That proves you have enough thrust in the engines to get away and enough controllability in the guidance navigation and control system to get away in a stable manner, even at the most challenging point,” Reisman said before the abort test. “We’re going to stick the same test article on top of a Falcon 9 and launch it, and when we get to that point of maximum aerodynamic pressure, we’re going to punch out and make sure she can get away then. When we test those two corner cases, we’re confident it’s going to be OK throughout the entire trajectory.”

For astronauts like Reisman, the option to get away from a catastrophic launch failure could be a life-saver.

“We’re proud to have a launch escape system in case the Falcon 9 is having a bad day, the Dragon crew can get to safety,” Reisman said. “It’s a capability we had on Gemini and Apollo, and we have it on the Soyuz, but we did not enjoy that on the shuttle. We’re bringing that back to try and make sure our crews are super safe.”

NASA designed the space shuttle without an escape system.

The shuttle’s early test flights carried ejection seats, and NASA added pressure suits and a telescoping pole astronauts to bail out of a stricken shuttle after the Challenger accident in 1986.

“We did the best we could with shuttle,” Reisman said. “When I flew, we had pressure suits, we had parachutes on our back, we had the pole out the side. We had a lot of things that Challenger didn’t have, but the situations in which those things could really help you were pretty limited.”

With a full-up escape mechanism, an entire spacecraft can be whisked away from its launcher with its passengers safely strapped inside.

“When the shuttle was developed, NASA was very much feeling its oats,” said Jon Cowart, a NASA manager assigned to work with SpaceX’s Crew Dragon development program. “We had just gone to the moon, which everybody said was impossible. We thought we could design a spaceship that did not need one, and we did.

“As physics and nature will sometimes do, they taught us a lesson that maybe you should not go do that,” Cowart said.

NASA mandated the Boeing and SpaceX spacecraft — along with the agency’s own Orion crew capsule tailored for deep space exploration — be outfitted with escape rockets.

“Having something that can help you, with validated performance and with a requirement to be over 95 percent reliable if it’s ever needed, and have that available from the ground all the way up to orbit, that’s huge,” Reisman said. “As an astronaut, I can’t overstate the importance of that.”

Crews carried notecards with instructions on how and when to bail out of a stricken shuttle, and Reisman kept a copy.

Wednesday’s test was a step in proving future astronauts have a little less to worry about when strapping into a rocket. 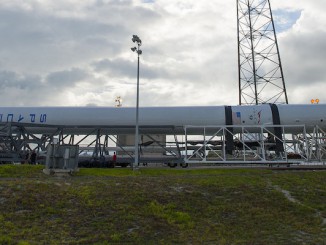 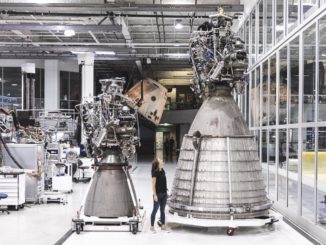 After second hop, SpaceX preps for next phase of Starship testing 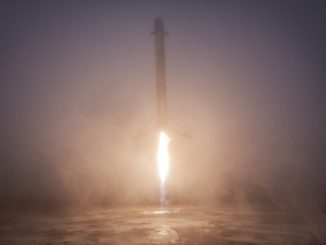