CAPE CANAVERAL — Launching for the 50th time, an Atlas 5 rocket flew a milestone mission Wednesday in deploying a Global Positioning System satellite for the worldwide utility.

Blasting off exactly on-time at 1:21 p.m. EDT, it marked the 17th consecutive Atlas to have been fueled and launched on a single attempt.

Setting a northeasterly heading, the rocket flew into a preliminary orbit high above the North Atlantic, where a three-hour coast began.

A circularization burn south of Australia entered the GPS constellation for release of the GPS 2F-8 spacecraft three hours and 24 minutes after launch. The orbit achieved was 11,000 nautical miles and tilted 55 degrees to the equator.

The $245 million GPS 2F-8 satellite will join the orbiting navigation network as the 31st functioning spacecraft — including four launched in 2014 — and 8 backups.

“While the frequency of these launches may appear routine, they are maintained by a significant amount of work leading up to today’s launch,” said Col. Alvin Burse, GPS 2F-8 mission director.

GPS 2F-8 will take Plane E, Slot 1 of the fleet in a shuffling plan that ultimately enhances the network. It should be checked out and operational by mid-December.

It has not been since 1993 that the Air Force launched four or more GPS birds in a single calendar year.

“Thanks to the high quality engineering commitment of the mission partners and the mission assurance practices used on this program, we (have) the highest GPS launch tempo in over 20 years,” said Col. Bill Cooley, director of the Air Force’s Global Positioning System Directorate.

Now, booster availability coupled with the need to replenish the orbital fleet has allowed so many GPS satellites to come to the launch pad this year.

The earlier lifting was accomplished by a pair of Delta 4 rockets, launching from Cape Canaveral on Feb. 20 and May 16 plus an Atlas 5 rocket flown Aug. 1, respectively.

This marked the eighth of 12 Boeing-built Block 2F spacecraft being manufactured to form the backbone of the GPS fleet for the next 15 years. The full dozen satellites are due to be launched by January 2016.

Three more Block 2Fs are slated to launch next year — in March aboard a Delta 4 and in June and September aboard Atlas 5s.

“We have a legacy to be very proud of and we will continue to live up to our commitments by sustaining and enhancing GPS mission capabilities to ensure we continue to deliver a healthy, stable and robust GPS constellation for users around the world.”

This was the 50th Atlas 5 launch and the 89th overall for United Launch Alliance, a partnership between Boeing, builder of the Delta family or rockets, and Lockheed Martin, developer of the Atlas.

“50 is amazing and we’re very proud to have reached this milestone,” said Ron Fortson, United Launch Alliance’s director of mission management. “But what really matters is the next one. That’s what it is all about — one launch at a time.”

Born of the Air Force’s competition to develop next-generation Evolved Expendable Launch Vehicles, the Atlas 5 debuted in August 2002. It has flown 18 flights dedicated to the Department of Defense, 11 for NASA, 11 commercial missions with communications and Earth-observing spacecraft and 10 with spy satellites for the National Reconnaissance Office.

One more NRO launch is planned for December from Vandenberg Air Force Base in California.

The next Atlas from the Cape is planned for January with the U.S. Navy’s third MUOS mobile communications satellite. 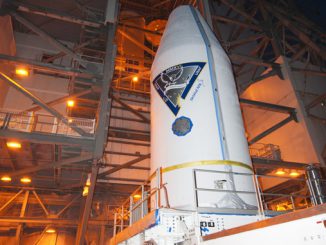 Photos and video: Payload hoisted atop Delta 4 for upcoming launch 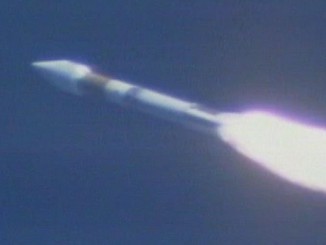 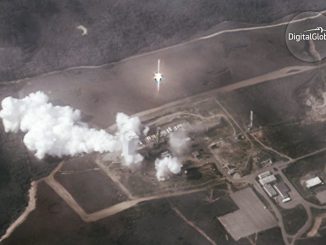